An unmistakable St. Thomas spirit resonates deeply regardless of its origin.

Karnell James was once a basketball scoring machine at Division III University of St. Thomas in Saint Paul, Minnesota. Now his singular drive is focused on coaching the Red & White to prominence within the state’s private ranks.

James was promoted in April 2020 as the next leader of Eagle Basketball after serving as an assistant for the previous two years. In his first season, he is delivering on his reputation as an acclaimed strategist and has immediately developed great rapport with scholar-athletes and their families, establishing the trust that routinely leads to long-standing relationships that last beyond the college preparatory experience.

James explains how he plans to create team chemistry and establish the program’s identity in Year 1 given the added challenges of the ongoing coronavirus pandemic.

I wake up every day trying to clarify and implement our culture, our values, and what’s essential to our program. As a collective unit, we have to be able to adjust, adapt, and keep an open mind, now more than ever.

I’ve identified four pillars in developing our habits and what we prioritize here at St. Thomas. Our student-athletes are growing in each of these areas.

The first is to do your job with maximum effort. From the time I was named head coach, I’ve emphasized what that looks like from a pure basketball standpoint.

Number two is having an unselfish attitude. I look back at my own playing career and being there for my teammates was always critically important. At the time, I didn’t really know what “culture” meant. But I felt it. You have to be a good teammate and our guys have that approach in all areas.

Number three, practice is paramount for improvement. And the team has embraced that approach, hammering home the importance of the details. Sloppiness won’t cut it. We’re seeking a fractionally sharper edge each time.

And the fourth pillar is to live in the present. We try to celebrate small victories. I talk to our group about being more process-driven than results-driven – how we practice on a day-to-day basis, give that maximum effort, and have an unselfish attitude. That ethic may not win a game against superior talent but it should put us in range to have success. Same thing off the floor.

Offensively, we want to play with pace and understand spacing. I want our guys to flow more, play with each other, and that ball has to move to find the best shot. Defensively, playing relentlessly and consistently hard for 32 minutes is about being disruptive and contesting. We have to be a team that pressures the ball, every pass, every shot. You have to defend and rebound, no question. You’re not winning big without that. But you look at these teams that advance deep in the state tournament – they’re good offensively. They find a way to get easy points, whether that’s personnel or some of the sets they’re doing. We’ve got to figure that out. 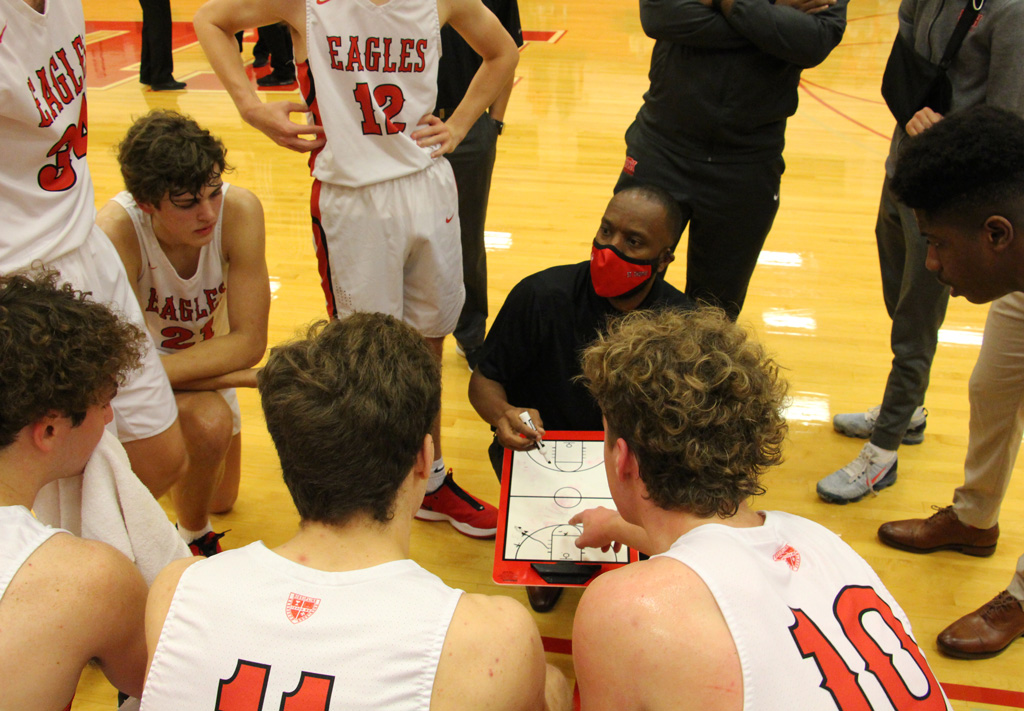 My primary objective is placing our student-athletes in the best possible position to accomplish the goals and achieve their dreams. And I’m excited about our guys and some big-time strides in their game. They will continue to have that because they’re all-in with what we’re about and what we’re doing.

I want competitors, guys who find joy in the work, who are gym rats, who are coachable, who want to be great. We’re going to handle ourselves in a first-class manner in everything we do because we’re St. Thomas. When everyone in the program is on the same page, that’s when special things happen.