One of Shakespeare’s most beloved and most performed comedies dating more than 400 years made for a memorable weekend of mayhem served with the genuine gusto of St. Thomas Theatre.

The free-spirited Twelfth Night, directed by Dan Green and presented at the Moran Fine Arts Center in Cemo Auditorium, brought an energetic and polished pursuit to an acclaimed work rooted in the pursuit of happiness, where love is forever in the air and “nothing that is so, is so.”

“We had eight weeks to tell this story, and given that we had that limited amount of time, I can’t believe we pulled it off as well as we did,” Green said. “A beautiful performance with amazing work from our actors and one of the absolute best sets we’ve ever had … quite a statement.”

Adding to the dizzy and jovial mix were Michael Patton ‘18 as Viola’s lookalike brother Sebastian, Andrew Neaves ‘17 as Olivia’s blustering uncle in debauchery Sir Toby Belch, Alec Jordan ‘17 as delightful curmudgeon Malvolio, and the always robust Parker Robertson ‘18 as the not-so-foolish fool Feste, a jester who thoroughly embodied the spirit and folly of the madcap festivities. 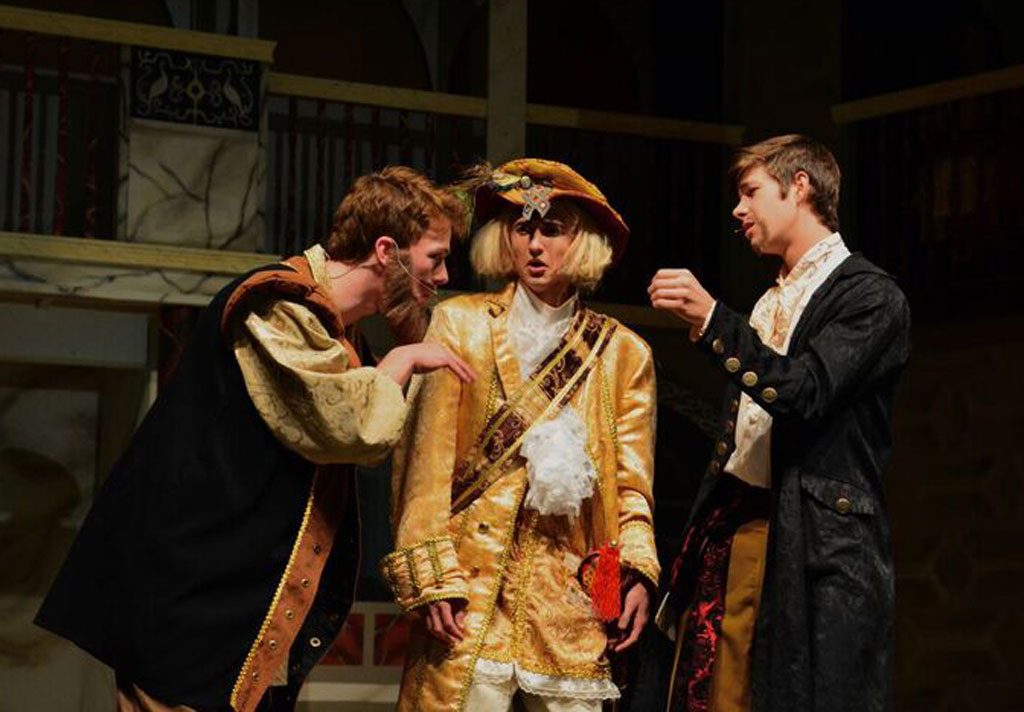 “First-rate performances across the board,” Green said.  “Ryan has always been a workhorse in our productions.  Parker and Andrew really delivered their A-game which is what we have become accustom to seeing.  Alec was truly amazing as the our villain.  I can’t say enough about passion and precision that Lauren and Allie brought.

“But what I appreciate as much as anything is how generous all our actors were in raising the collective performance level of the entire cast We had some moments where seniors gave way to freshmen who in turn got the laughs. And how they’re hooked. They are revved to do theatre in the next three years. I applaud what was truly a collaborate effort.”

The four-performance engagement entertained audiences with a slew of mistaken identities laden with some of the finest comedic scenes in the English language. The truth eventually emerged with the figures on the chess board paired in unlikely ways, love proving itself fickle or powerful – all depending on the perspective. 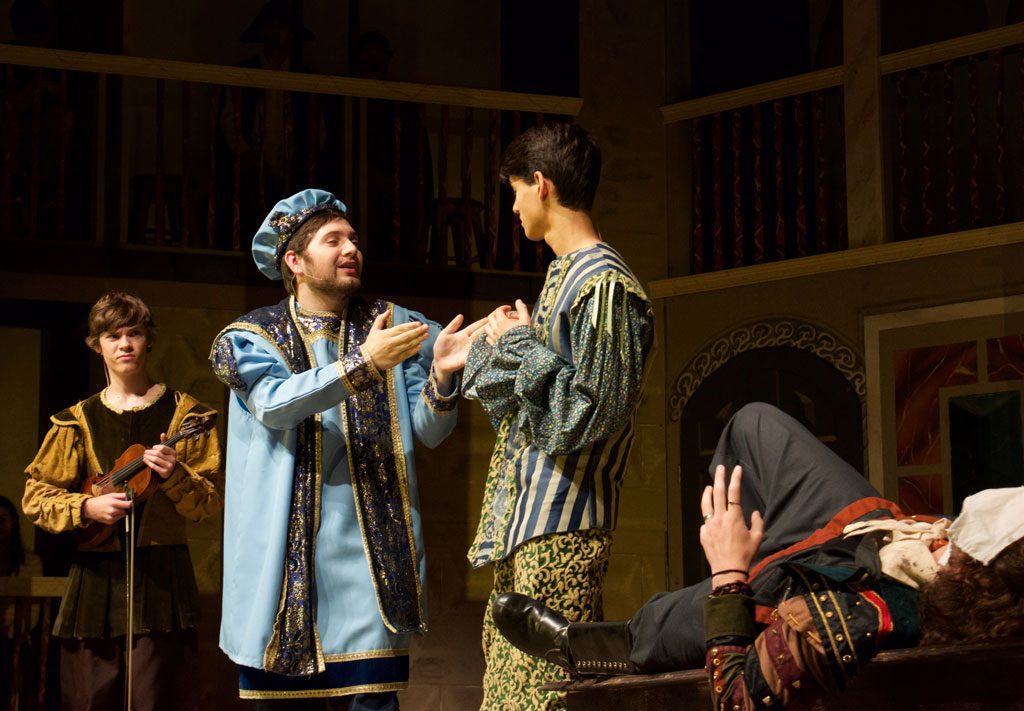 “Our actors were particularly dedicated in abstracting the meaning of the story,” Green said. “They were incredibly dedicated to understand and act every line of the Shakespeare and just toss lip service to the material.”

Of equal billing to a the star-powered cast was a globe-like theatre reminiscent of the Bard’s Elizabethan playhouse, expertly crafted by faculty members Phil Gensheimer and Stephen Fuchs, chief engineer Duane Fuchser, with valuable contributions from within the St. Thomas community, notably Adam Maloney ‘17 who designed an elaborate bench and table, augmented by the superb lighting coordinated  by Joseph Hassell ‘18.

“Go big or go home is our mantra,” Green said. “Creating excitement for the cast and crew and staff and audience is always what we embrace. When I suggested aloud what I had in mind to Stephen, Phil and Duane, they were immediately on board.

“It was fascinating to have that setting inside Cemo Auditorium, to replicate what it would have been like to experience Shakespeare in 1602. We are now in the process of finding an off-campus facility to store and save at least a portion of that set so we may add and utilize it in the future.” 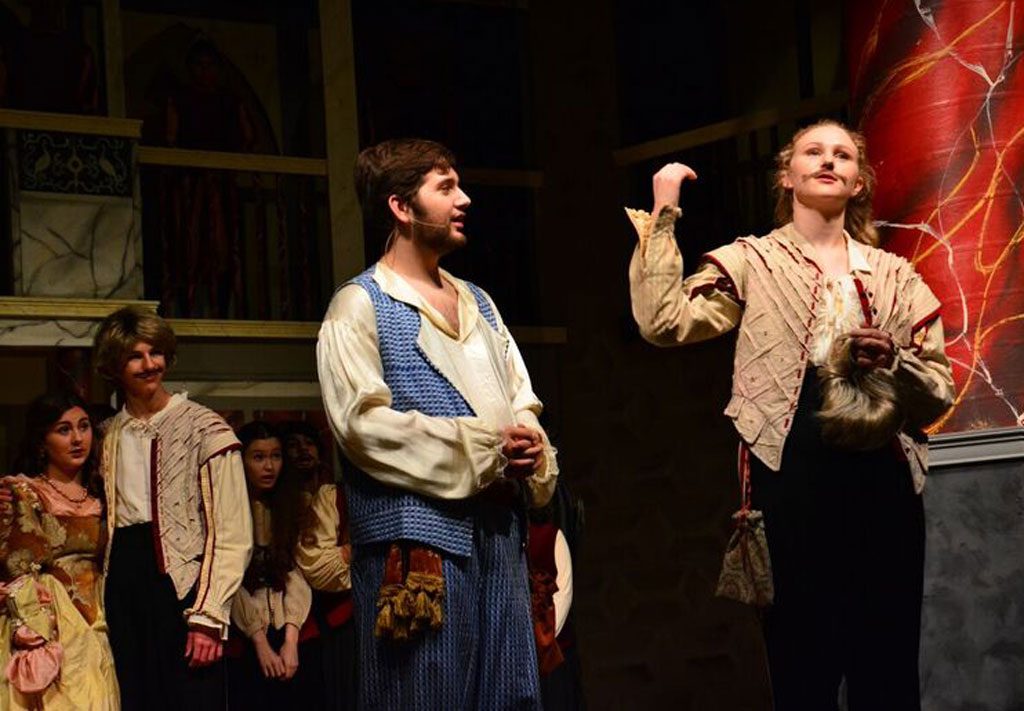 The enduring full-titled Twelfth Night, or What You Will has commanded the immense talents over generations from a wide array of acclaimed performers ranging from Diana Rigg and Judi Dench to Helena Bonham Carter and Anne Hathaway … Ian Holm and Ian McKellen to Stephen Fry and Eddie Redmayne … even a 2006 film adaptation She’s the Man starring Amanda Bynes and Channing Tatum.

Green admitted during rehearsals to great anticipation for how his actors would welcome the challenge of bringing some of Shakespeare’s most identifiable, and zany, characters to life, and was gratified to have the production measure beyond his lofty expectations.

“Traditionally our actors initially greet Shakespeare with ‘I hate it, I hate it,’” Green said. “Then, ‘It’s not the worst.’ Then, ‘I like it … I like it a lot … this is great.’ Before you know it, they start loving the material. The language was deep and that required significant effort in order to interpret. All of which made the final result all the more pleasurable.”

Green is all but committed into next presenting The Addams Family Musical, that lovable gang creepy and kooky, mysterious and spooky, and of course altogether ooky.

Patrons are encouraged to look for the magnificently morbid world of Gomez, Morticia, Uncle Fester, Grandma, Wednesday, Pugsley and Lurch, based on the original Charles Addams cartoon characters, March 24-26 on the STH campus.