Honor is a primary value for any institution of higher education, especially at St. Thomas which prides itself on its commitment to the Basilian virtues of teaching of goodness, discipline and knowledge, with students embracing and reflecting the same.

Faculty member Dan Green was struck during the summer of 2016 with an inspiration that would greater illuminate that unique Eagle spirit of compassion and connectedness that comes from being a Man of St. Thomas.

“I would often see so many students doing great things on our campus and I wanted to promote the qualities they were representing every single day,” Green said.  “We have a prestigious Hall of Honor identifying exemplars of the past, so why not highlight those in our present ranks.”

Green broached the idea of a GDK Honor Roll with president Fr. Kevin Storey, CSB on the first day of the 2016-17 academic year and was granted the immediate green light to move forward. 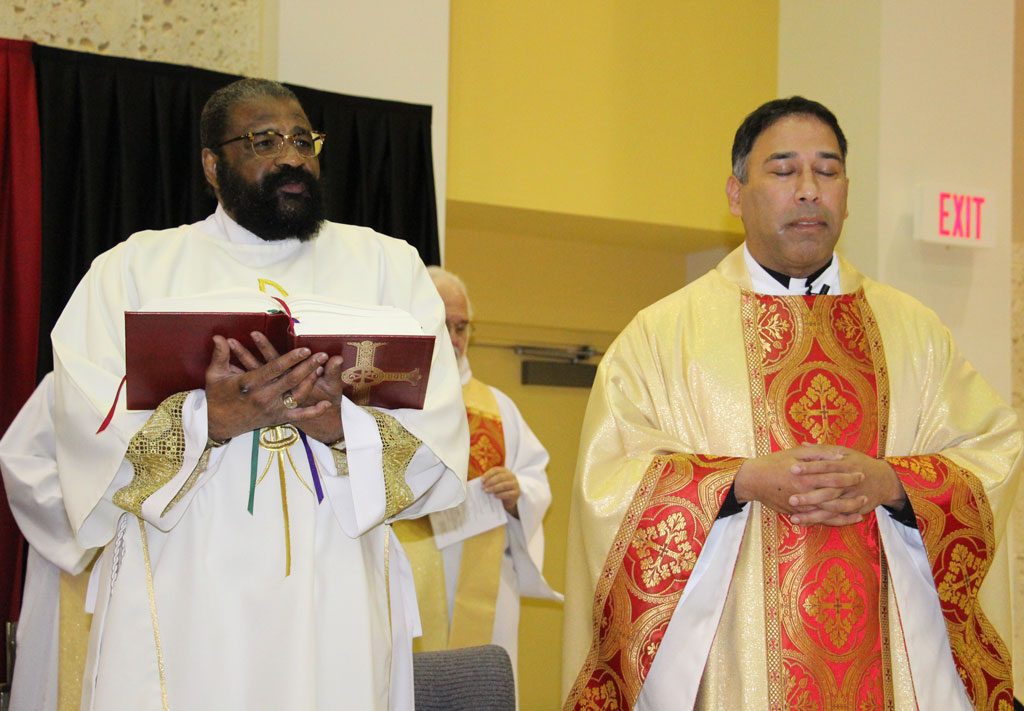 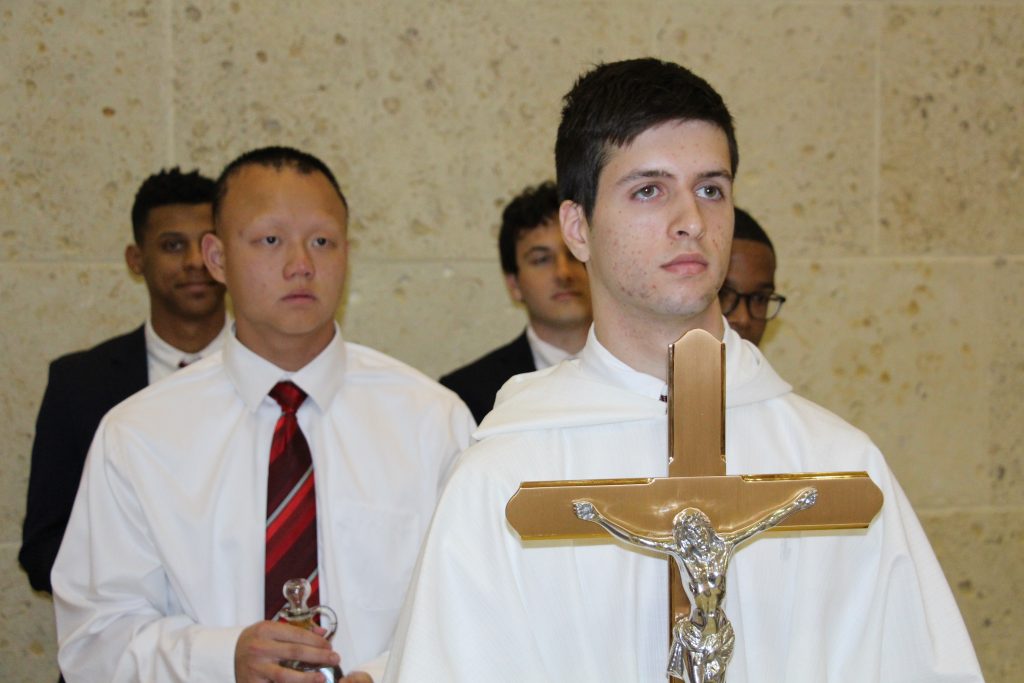 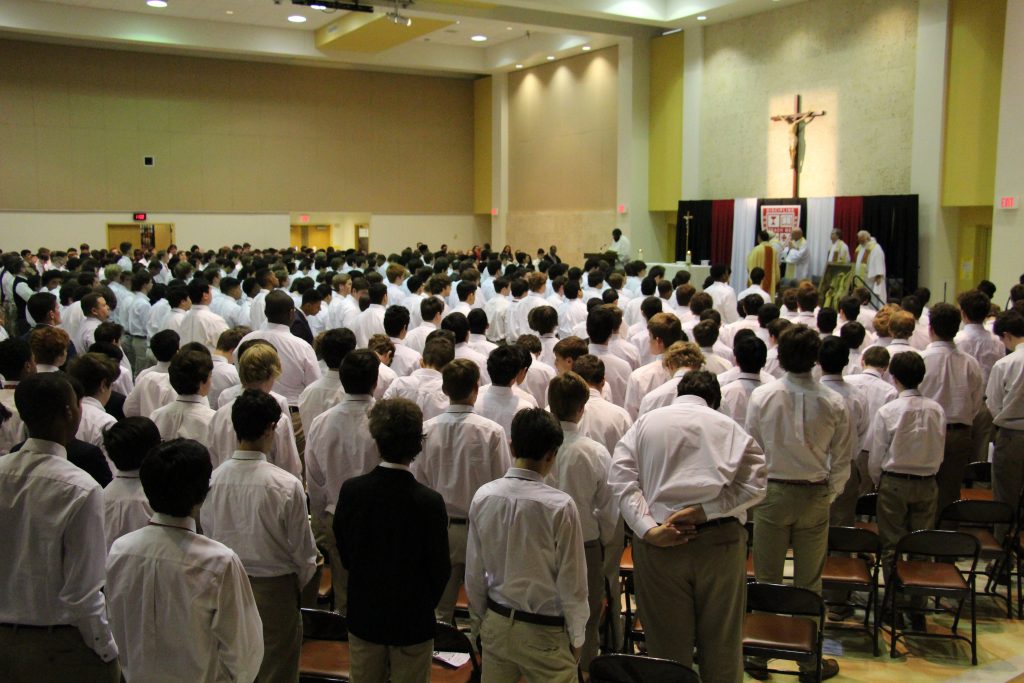 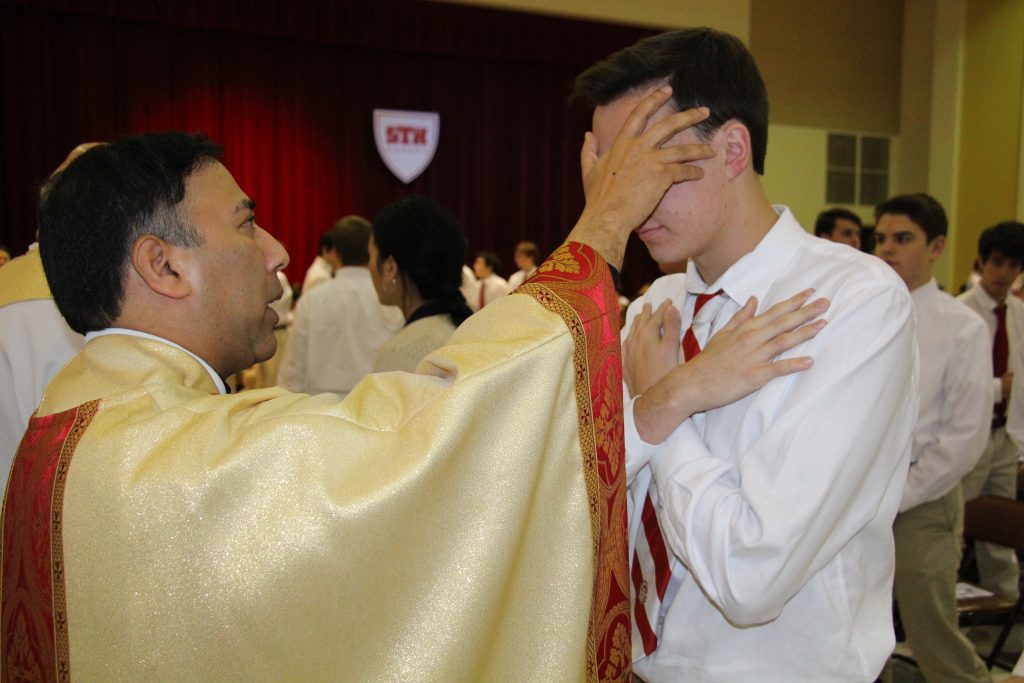 Green’s proposal was quickly approved within the administrative hierarchy and the four charter members received distinction at the January 30 Mass celebrating the feast of the school’s patron St. Thomas Aquinas during the start of National Catholic Schools Week.

“The nominations were sincere testimonies to what was taking place within our community,” Green said.  “It was difficult to narrow the selections down to only four.  I am grateful to our students who made a conscience effort to participate in the spirit of our process and a huge gratitude to (faculty member) Daniel Bryant ‘93 for all that he did to facilitate the online surveys.”

Bryant will continue to play a principal role in the program that promotes students twice each semester, and opened the presentation with a quote from the GDK Honor Code … As a Man of St. Thomas I uphold our honor through goodness, discipline and knowledge and I lead my brothers to do the same.

“This isn’t just a statement but what we are called to live,” Bryant said.  “We are surrounded by examples of what it is to be good, to be disciplined and to be knowledgeable.  The GDK Honor Roll is a way to salute our brothers who are genuine examples of our code.  During the second academic quarter, students, faculty and staff were encouraged to nominate class members living the code on and off campus.  A committee of students representing each grade level was selected to determine the first students inducted.”

Incredibly nice and incredible quiet … has used his talents to better our student community, particularly through Eagle Broadcast News … often investing his own time outside of class … while never seeking public credit … and ‘always doing an amazing job.’

Wrote and coded software programs to assist students in the Learning Commons … tweaking the program … with persistence to make it the best possible … always demonstrating charity, intelligence and a willingness to help.

His strength in choir attests to his dedication and support of the group … his talent and discipline guided him to represent (St. Thomas) in both the region and state competitions … indeed, a Man of St. Thomas.

Consistently volunteers during the academic year and summer months … often at the Houston Food Bank … quietly and without fanfare … a humble soft-spoken leader who reaches out to the less fortunate in Houston.

Le was unable to attend Mass and accept his accolade.  Zugheri, Deitz and Hassell all had working knowledge of the GDK Honor Roll, didn’t expect to emerge from the nominees, but took significant pride in their selections.

“The program establishes who are the honorable leaders, those who the underclassmen should strive to be,” Zugheri said.  “My grandfather always told me, and I’ve kept this in my head my entire life … rules no. 13 and 14 … when in command, take charge … and always do what’s right.  I base my life on knowing what is good, knowing what I should do, and leading others to do the same.”

Hassell said it was “rewarding to be recognized outside of academics for your accomplishments.  I prefer working behind the scenes rather than out front but there’s a confidence that comes from others noticing and appreciating your contributions.”

Deitz was among the seniors who provided the initial presentations in the fall outlining the program but wasn’t confident he would be nominated, much less included among the finalists.

“I don’t know that I’ve done anything special.  I’ve done what I’ve been taught to do, how I’ve been raised,” Deitz said.  “But this (distinction) assures me that what I’m doing in my life, how I show myself to other people, can be a model.  It humbles me to receive this but also pushes me to always be that person for others.”