Justin Van ‘17 was arranging the class schedule for his first freshman semester at St. Thomas and was immediately intrigued by an unexpected option.

To Van’s shocking dismay he quickly learned he had selected a course which offered nothing in common with the popular television series of investigators confronting often-grisly Las Vegas crimes, or even the actual expertise on ballistics, fingerprints and bite mark analysis in solving the most challenging criminal cases.

Van, a self-admitted “quiet kid (who) kept to himself,” had opted into an aggressive debate curriculum that placed him significantly outside “his comfort zone.”

“You can image the surprise and absolute dread on my face when the forensics instructor starting going up and down the rows demanding each and every student give a full 10-minute speech.  I barely made it past minute two.”

Van somehow summoned the necessary resolve to successfully complete the academic year.  And then promptly registered in Forensics II.

As a senior, Van is a leading member in St. Thomas Speech and Debate, an anchor for the Eagle Broadcast Network, and award-winning on-line editor-and-chief of The Eagle student newspaper publication. 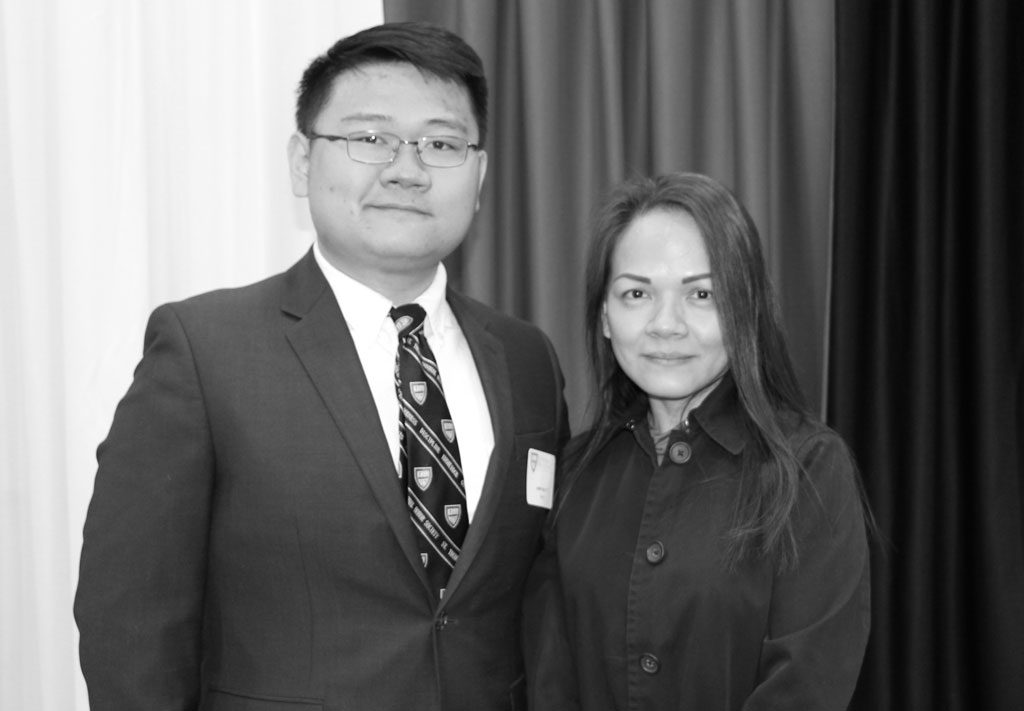 In February, Van was also center stage addressing a gathering of 270 attending the 10th Annual Scholarship Breakfast, honoring the tradition of philanthropy that remains vital to the school’s cherished Basilian legacy.

Van is among the more than 30% of Eagle students receiving some sort of need or merit-based tuition assistance.  He related to a riveted crowd of donors and supporters in Cemo Auditorium that his somewhat misguided introduction to forensics allowed him to discover “the value in learning to speak my mind, to articulate my thoughts and my arguments.  If this was the only thing I learned at St. Thomas in my four years, all this time and money would be worth it.  The years that controlled me have been shoved to the side.  This school has done a lot for me, where it happened for me, and for that reason it will be a constant in my life, just as it has been for all of you.”

Like Van, Nathan Jolly ‘17 is a thriving presence in forensics and EBN, as well as an Eagle Scout.  Jolly said he “knew from the first moment (he) set foot on campus (from Holy Spirit Episcopal School) that St. Thomas was the place (for him).”

And that unshakable confidence resonated even deeper when Jolly’s father passed away during the 2015-16 academic year, a time Jolly admitted when there was “every reason to give up.”

“The (academic) workload seemed impossible and I always felt I was falling behind,” Jolly said.  “But the discipline that I learned (at St. Thomas) pushed me to keep working.  With support from my teachers, particularly Mrs. (Chrissy) Gensheimer, (fine arts dean) Mr. (Mike) Nebel, Mrs. (Loretta) Debaillon and Mrs. (Julie) Dienno-Demarest, I was able to keep up (with extended deadlines).  Eventually I finished the year with a GPA higher than it had ever been, even though it was the hardest year of my life.  I now hope to attend Georgia Tech.  The scholarship awarded me the last four years has enabled me to know what it means to be a man and to prepare for a stronger future.”

The Basilian motto of Teach Me Goodness, Discipline and Knowledge is the hallmark of the St. Thomas experience. 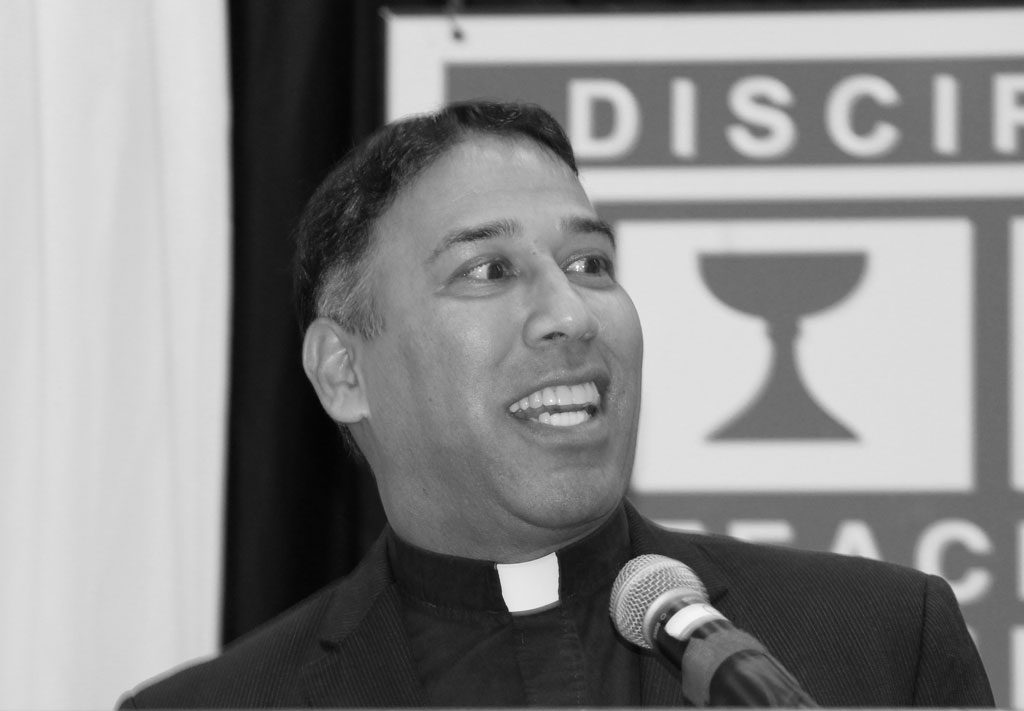 President Fr. Kevin Storey, CSB acknowledged that the consequences of discipline and knowledge are often readily recognizable but goodness represents more of a mystery.

“How do you teach goodness.  Certainly through campus ministry or service programs.  You also teach goodness through an event like our Scholarship Breakfast.” Fr. Storey said.

“It never ceases to amaze me, how many students will ask, ‘Why did someone give this money for me? They don’t know me or about my life.’  One of the greatest gifts is anonymous generosity, one of the truly genuine ways to teach goodness in our world, and especially at St.Thomas.  All our donors are a tangible example of how we teach goodness.”

Fr. Storey, vice president of finance Eve Grubb and vice president for advancement Mark deTranaltes ‘83 collaborate with a nine-member Foundation Board headed by Thad Fuller ‘76 (below, right, with Hector Herrera ’75) that oversees a $16 million endowment with 77 named and endowed scholarships made possible by the benevolence of contributors since 1969, more than half established since 2000. 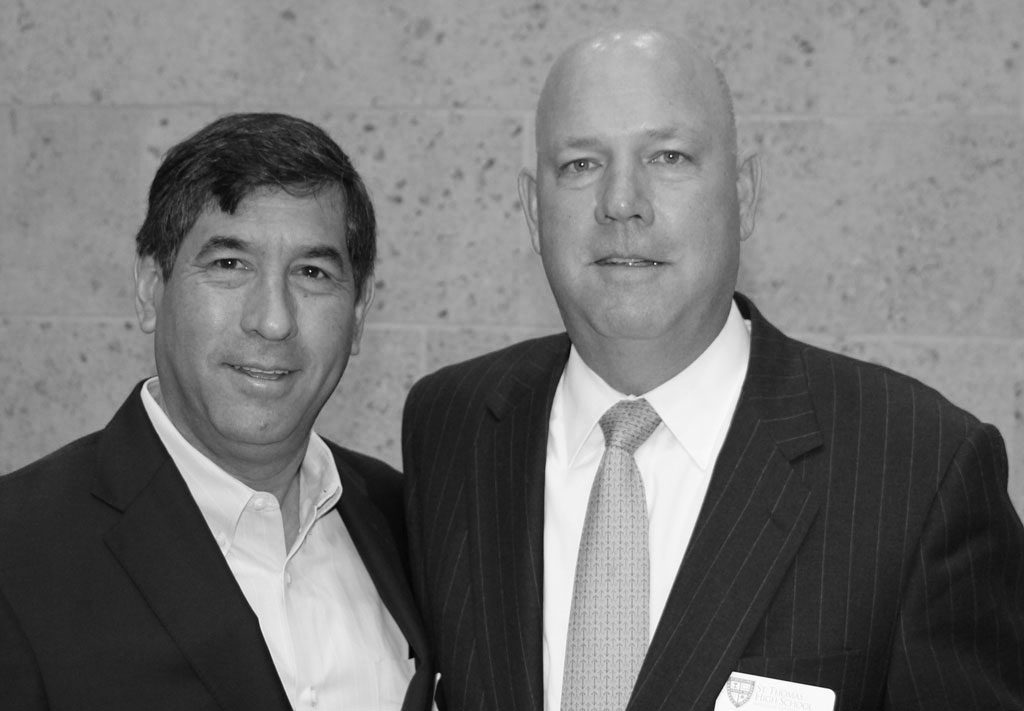 “St. Thomas is doing what St. Thomas has always done, teaching young men from all walks of life and backgrounds, preparing them to go out in the real world and make a difference,” Fuller said.  “We have a great tradition of illustrious alumni, and so many others like me, who enjoyed their time here as students and are motivated to give back, keeping this spirit alive and enabling it to flourish.”

For six years Molly Hittinger has been the driving force in orchestrating the Scholarship Breakfast event as a member of St. Thomas Advancement.

“This year several scholarship supporters and St. Thomas staff members mentioned to me that it is their favorite St. Thomas event of the year and I agree,” Hittinger said.  “It struck me that we are in a room full of our students who receive tuition assistance of every kind … need-based, academic merit-based and named scholarships. We are celebrating these young men and the scholarship supporters who have invested in their education.”

Van attended St. Theresa Catholic School less than four miles west from St. Thomas on Memorial Drive, but was undecided about his high school destination until he received “a very generous financial package from St. Thomas that allowed me to pursue the education and same experience (the scholarship donors) all know and love.”

Van intimated to the gathering that “it’s not the places where you go, but it’s about the people you meet along the way.  This school has given you something special, something that extends far beyond the four years that you spent here.  And I’m glad you were willing to extend a helping hand to anyone who wanted to experience the same things you did, to forge the same friendships.  The people that I’ve met here are truly distinctive, and I know without a doubt, that if not for you, they and I would not have the privilege to call each other Eagles.” 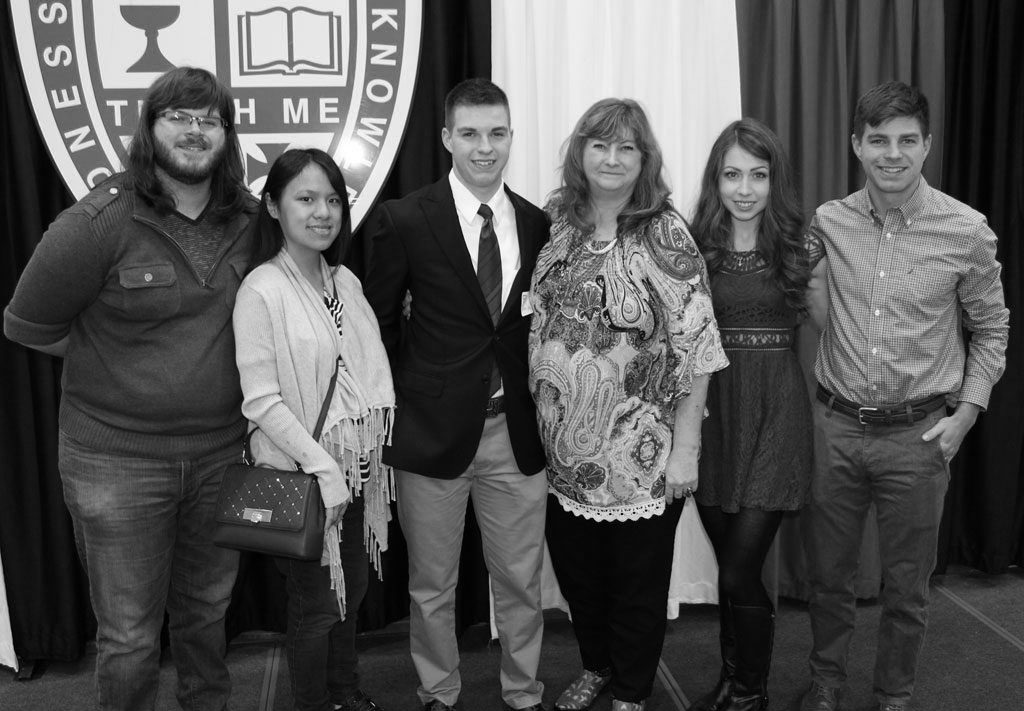 Jolly had earlier concluded his testimonial quoting the school’s alma mater, adding that “the men of St. Thomas are beacons in a world of darkness.  And through your contributions, we can continue our mission of teaching goodness, discipline and knowledge.”