#TBT Voice From The Storm, A Flood Of Emotion – Doug Gregory ’87 Tells His Story of Hurricane Harvey

This story was originally published in December 2017.

Hurricane Harvey began as a low-pressure blip on the radar … methodically heated up through the tropics …
intensified up until the moment of landfall … and surged into the strongest storm to slam Texas since Carla in 1961.

The devastating rains began to hit Houston during the night of Saturday, August 26, and the predawn hours that Sunday morning, five to six inches per hour, a slow churn for the next five agonizing days, and releasing more rain than any storm ever in the continental United States.

Meryl and Doug Gregory ‘87, and their sons Jeremy ‘15, Barrett ‘18 and Griffin ‘21 had moved into their Lakeside Estates residence in November 2014.  The family was all too familiar with the perils delivered on a whim without mercy from Mother Nature, none of which proved the proper preparation for the breadth and intensity of a weather event that exceeded the most feared forecasts. 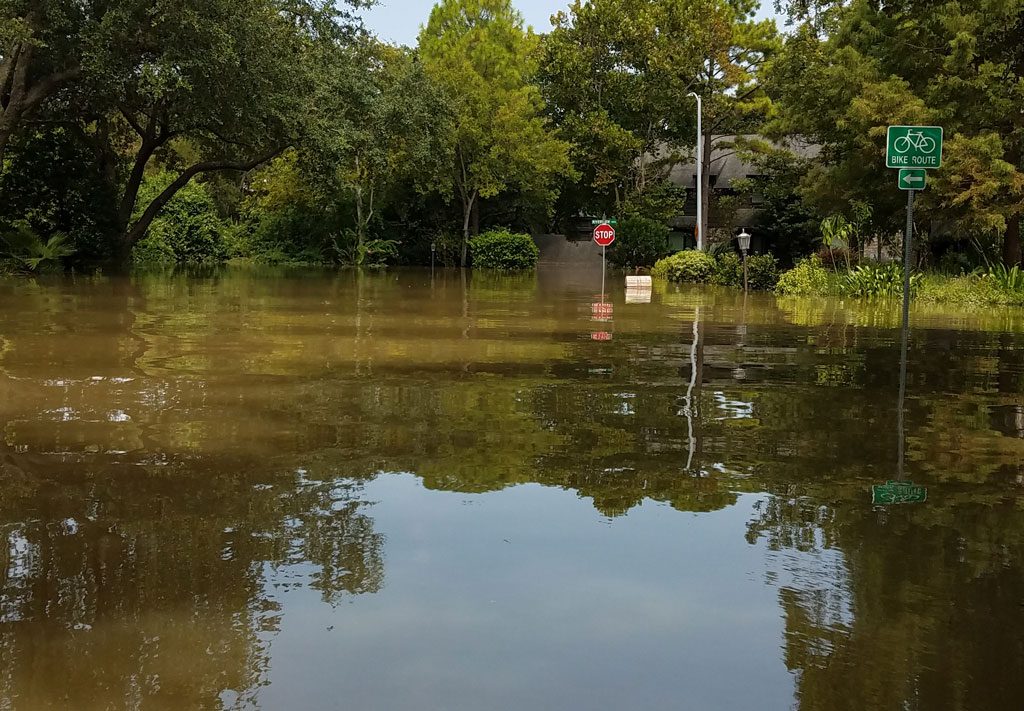 This is Doug’s story of Hurricane Harvey so far.

Our home was rural in the middle of urban. We love the outdoors and this was the ideal mix for our lifestyle. No neighbors in the backyard … wooded ravine lot that carried to water where you would find fish, turtles, ducks, and cranes. Screened enclosed porch. Huge deck where the boys would hang out with friends.

I was paying strict attention to the storm projections … had lived through (Hurricane) Ike (in 2008) … and we got out of Houston to stay with friends in New Braunfels.

We drove back and then had to first go to Galveston to get our Jon boat because our street was a river. Absolutely surreal … docking a boat on your front porch. We had taken a refrigerator out of the garage and put in front of the steps thinking it would be safe. Gone. Floated down to River Oaks.

Our garage was completely underwater up to the gutters. But inside the house was dry. We’re thinking we’re going to be ok, escape largely unscathed. 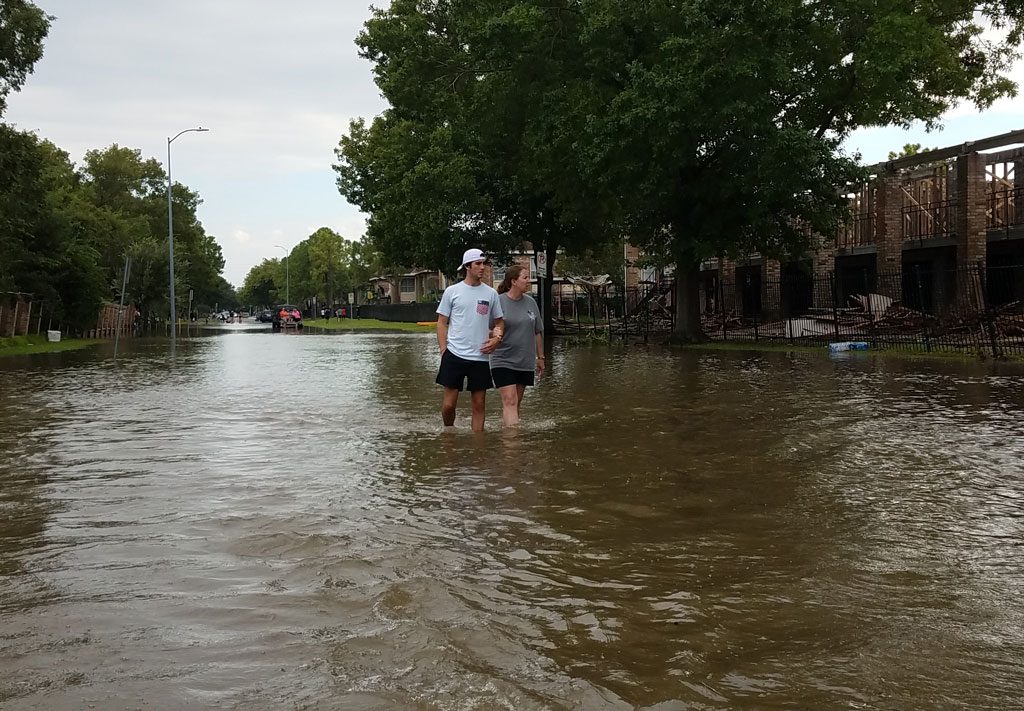 But in a short time, firemen in waders are telling us we had to leave. Now. (The nearly full Addicks and Barker Reservoirs sitting on either side of I-10 west of Houston will be released, causing more flooding downstream along Buffalo Bayou). Don’t know if that means another two feet or 20 feet of water. Time for you to go. We got as much as we could up to the second floor of the house … filled garbage bags with clothes and necessities … loaded people and dogs onto a raft behind a boat … and motored out in the middle of the night.

That’s when the full impact of what you’re facing hammers you. 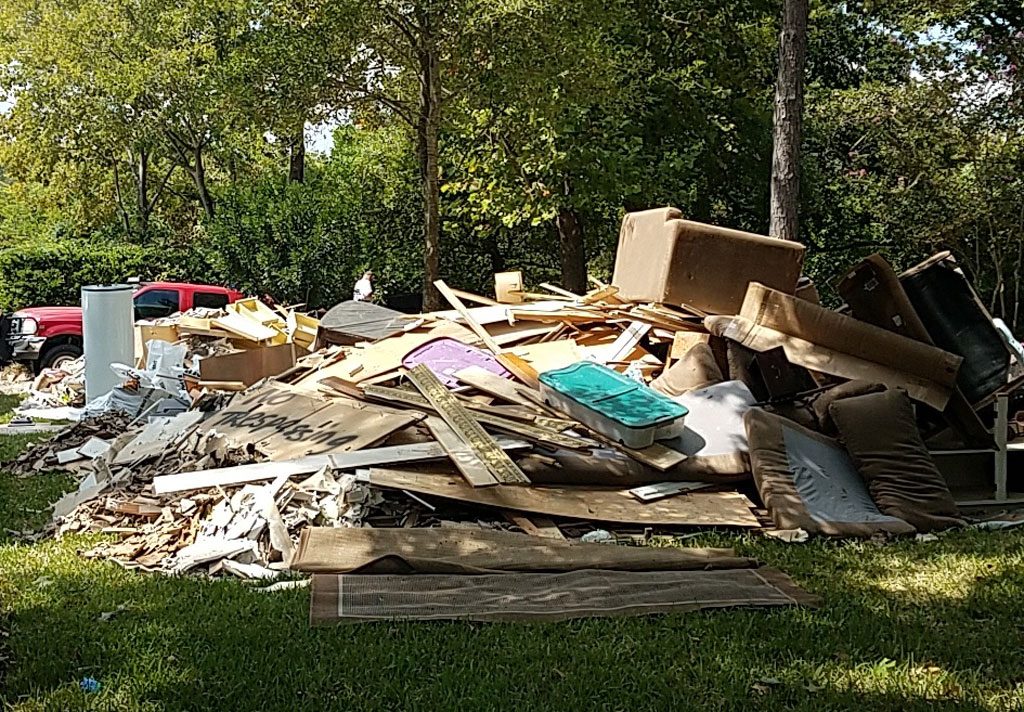 And our family has a history. It’s not like we haven’t dealt with these sort of consequences. A fire and a flood in the same year (2001). Then there was a tornado. And two more floods (Memorial Day 2015 and Tax Day 2016). I’ve learned that so much of what you have is stuff that can be replaced.

But everyone has limits. Some of the stuff is personal stuff … from your childhood … from Meryl’s father … photographs of my grandfather … important papers … heirlooms … priceless memories that somehow had survived previously were now gone or trashed. There’s a sadness that can overtake you. It’s emotionally and psychologically draining.

I was determined to be strong for my family but at times you become vulnerable, the overwhelming nature of the circumstances can get to you. You simply have to move forward … grind the process … identify the next obstacle … manual work … insurance claims … estimates … contractors. Do we tear the house down or not. Important decisions that carry ramifications. At times you’re worn to the nub.

Jeremy immediately drove in from (the University of Arkansas). I told him there’s nothing you can do. He wouldn’t listen. Stayed as long as he could.

Barrett gave a speech for his Life Teen group at St. Cecilia Church … what God means to his life. This becomes really emotional for me. Barrett said that we had a fire and we had to move into a rental house. We built a new house and moved … two years later moved again … two years after that moved again … stayed there for eight years and then moved to this house that is flooded … now in a townhouse for who knows how long. He said the only real home that has stayed with him is his Catholic faith. For a father to hear that in his son’s own words is huge. And at the same time, it’s extremely hard because inside of me, there’s a sense I’ve made my family homeless, through no fault of my own obviously but there’s still a guilt.

It’s gratifying that through these incredibly trying times, Barrett has gained an invaluable strength from God that can serve him his entire life. He’s a rock. Jeremy is a rock. Griffin is a rock. I explained to them at the very beginning of this ordeal that the number one priority in this family is your mother. Whenever and whatever she wants, you do. And they have responded beyond measure.

Three months since Harvey our street remains a zombie apocalypse. There is no one living there and no one will likely live there a year from now. No one knows if anyone will be allowed to rebuild … yet three streets over kids are riding bikes and throwing footballs in front of their homes. 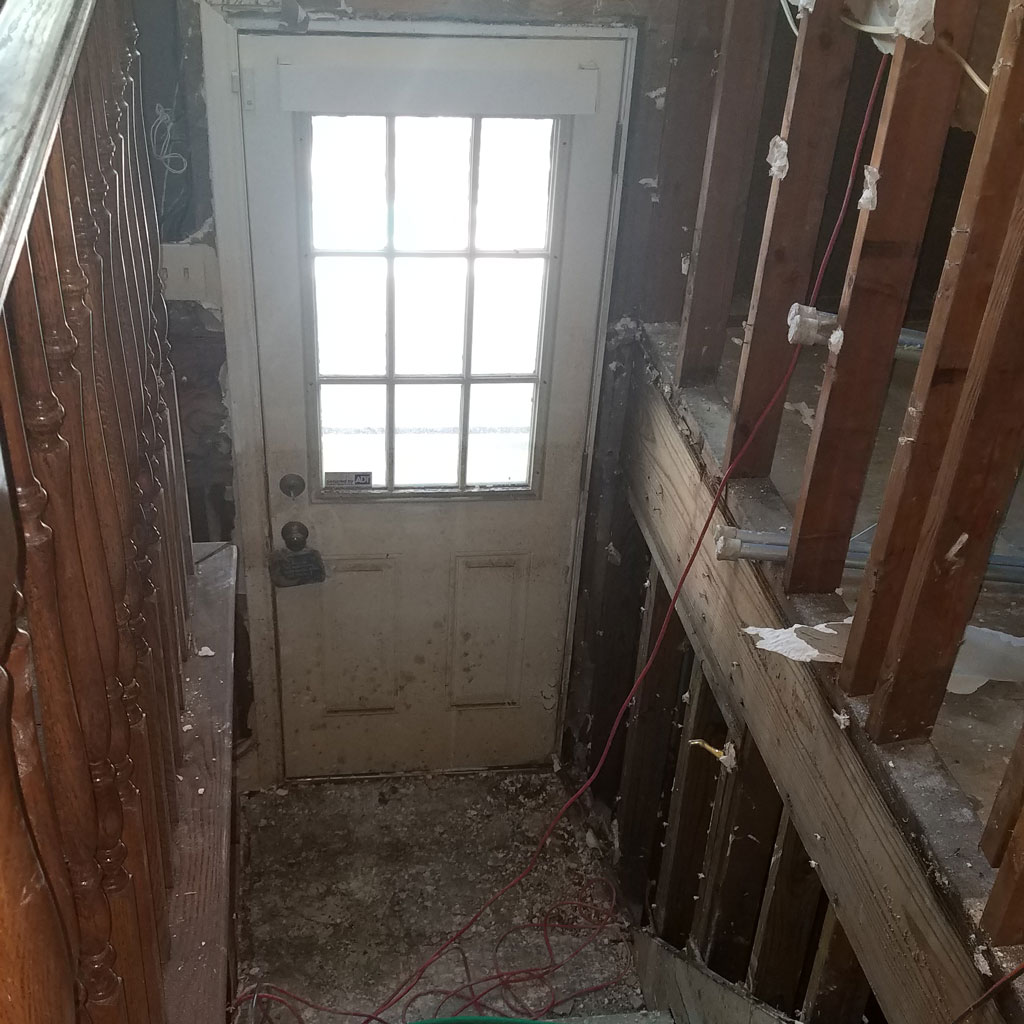 During Christmas and the holidays, our family will focus on what we have, not what we want. The cloud of uncertainty hangs. In the early part of 2018, we’ll get an appraisal of the property. The foundation has heaved and cracked because of the constant water exposure. There are a number of options … will just have to wait and see. All we can do is plow forward and provide a stability for the boys … school, sports, their routine.

The great outpouring of support and love our family has received from so many communities cannot be measured.

A team of young men with (campus ministry director) Marty Matulia and Willie Madden (class of ‘82) from St. Thomas were on site right after the storm ripping out damage and clearing debris. I’ve been involved with a men’s group from St. Cecilia. St. John Vianney Church has been a haven for so many in need.

And without question the friendships I developed at St. Thomas have been vital. Those are the absolute closest bonds I have in my life. Not from college. Not from professional circles. St. Thomas is my core … where I have found solace … a sanctuary.

Within the first hours of Harvey, Andrew Cochran (class of ‘87) called me from the Netherlands and offered a condo to stay for as long as I needed. Matt Dexter (class of ‘87) and Trey DeNina (class of ‘88) showed up at the house almost before we could get inside to help in any way they could. My St. Thomas brothers were not going to allow me and my family to fight through all this alone. 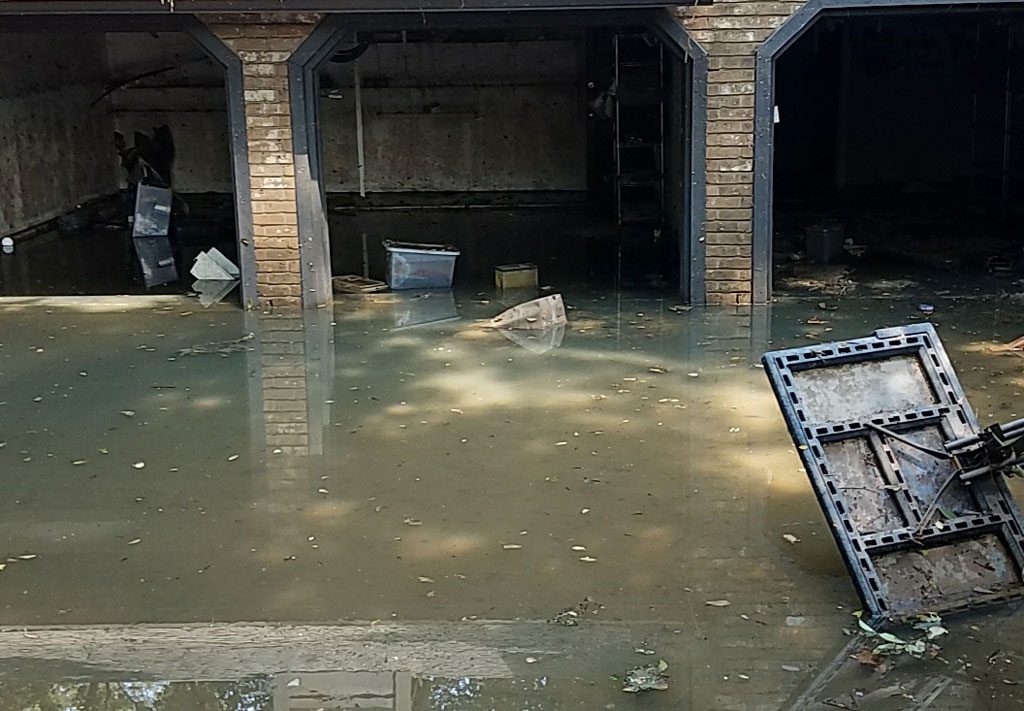 I have always believed that you cannot get through life without friends. My sons are finding that same affirmation. When people are reaching out without being asked … only through the goodness and concern of their hearts … I cannot begin to describe how that caring has given me strength.