This story was originally published in November 2014.

For nearly two months his identity was a mystery but never his unquestioned commitment to ensure the all-encompassing future excellence of his alma mater.

And now there is a face and a name to the driving force behind the No Substitute For Victory Challenge, thrusting the most ambitious capital campaign in the 114-year history of St. Thomas to a triumphant conclusion.

Friday night Bill Joplin `54 emerged from the shadows and assumed center stage, the focal point of the annual Alumni Weekend turned celebration of STH past, present and promising future.  Joplin was identified by St. Thomas President Fr. Kevin Storey, CSB as the anonymous $6 million alumni-donor during Alumni Weekend, presented to a thriving support group gathering on campus with a more than suitable backdrop.

The Eagles erased a 14-10 halftime deficit against generational rival St. Pius X with 28 unanswered second-half points to seal a third straight district title and 19th straight win at home while the 1964 state football champions were honored at halftime. 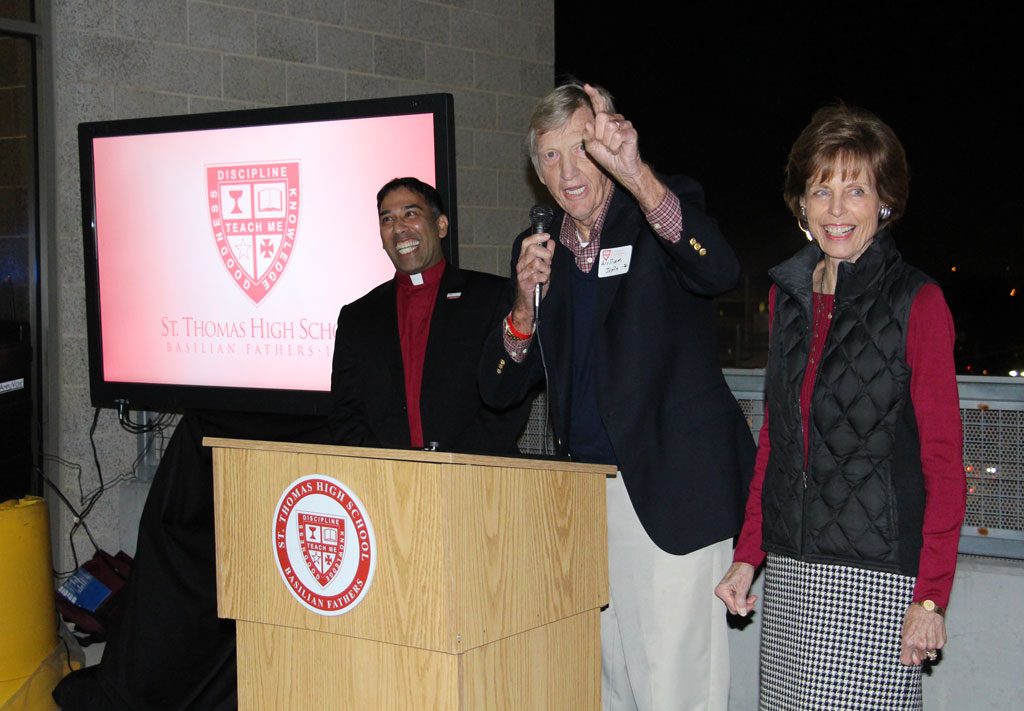 “Not that long ago I never would have dreamed being here tonight … certainly never expected to be involved quite like this,” Joplin told the assembled alumni.  “But this campaign is so big for St. Thomas.  We needed something to help get us over the hump.”

Joplin stepped forward in mid-September to match dollar for dollar, each donation and pledge, up to $6 million and will continue that commitment through December 5 to assure maximum benefit to 4500Forever.

Since the No Substitute For Victory Challenge was declared, Joplin’s bold generosity has generated $6.6 million, raising the 4500Forever total to $38 million.

“Bill was an answer to our prayers, no doubt about it.  He guaranteed the success of the campaign,” president Fr. Kevin Storey, CSB said.  “He transformed the campaign.  Having that size boulder go into the pond mid-way through our fundraising effort has sent a reverberating belief of accomplishment and confidence to our community.  So many wide-ranging examples … a $250,000 donor who indicated he was inspired by Bill’s initiative.  But regardless of the amount of the each gift, Bill instilled that sense of  ‘now it’s my turn’ which has struck a chord within so many Eagles.”

STH stands on the brink of the the one-year anniversary of securing the final-hour $60 million final bid for the adjacent 11-acre HISD property, a North Campus expansion which broadens the STH physical footprint, and brings additional facilities and land space to enable the Basilian Fathers to continue their educational mission and maintain the STH urban identity at the 4500 Memorial Dr. campus into the next century.

Joplin had held a deep and distinguished history of service to STH for decades.  He followed the Eagle lead of his brother, Jack `42, and Bill’s son, Richard ‘84, continued the family legacy,  celebrating his 30-year reunion earlier in the spring.

4500Forever was ongoing when Joplin somewhat suddenly felt the urge to “do something big” to catapult the campaign to completion.  He elected to initially keep his name unknown, preferring that the emphasis be placed on the collective 4500Forever effort rather than create a singular spotlight. 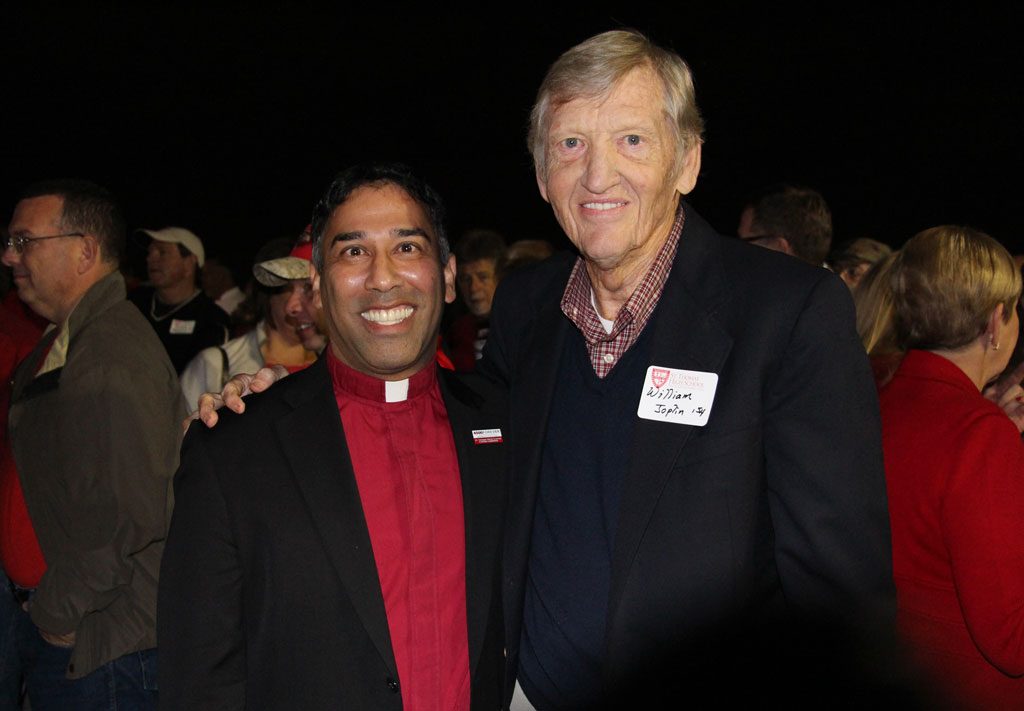 Joplin and Fr. Storey crafted the NSFV $6 million Challenge, which was unveiled to the greater St. Thomas community September 19 minutes before the Eagles kicked-off their annual Homecoming game.

At that time Joplin spoke in anonymity that he was “hoping (to) loosen some pocketbooks sitting on the sideline.  (This) is the time to come forward and back a winner.”

Fr. Storey draws the analogy of a pennant contending baseball team swinging a deal in the stretch drive for that critical additional presence which eventually serves as a championship catalyst.

“We already had a great team.  Bill Joplin was adding that clutch hitter, that difference maker in the middle of our lineup, someone who creates confidence and energizes his teammates to dig deeper, demand more from themselves, perhaps even reach a level they didn’t realize was possible,” Fr. Storey said. 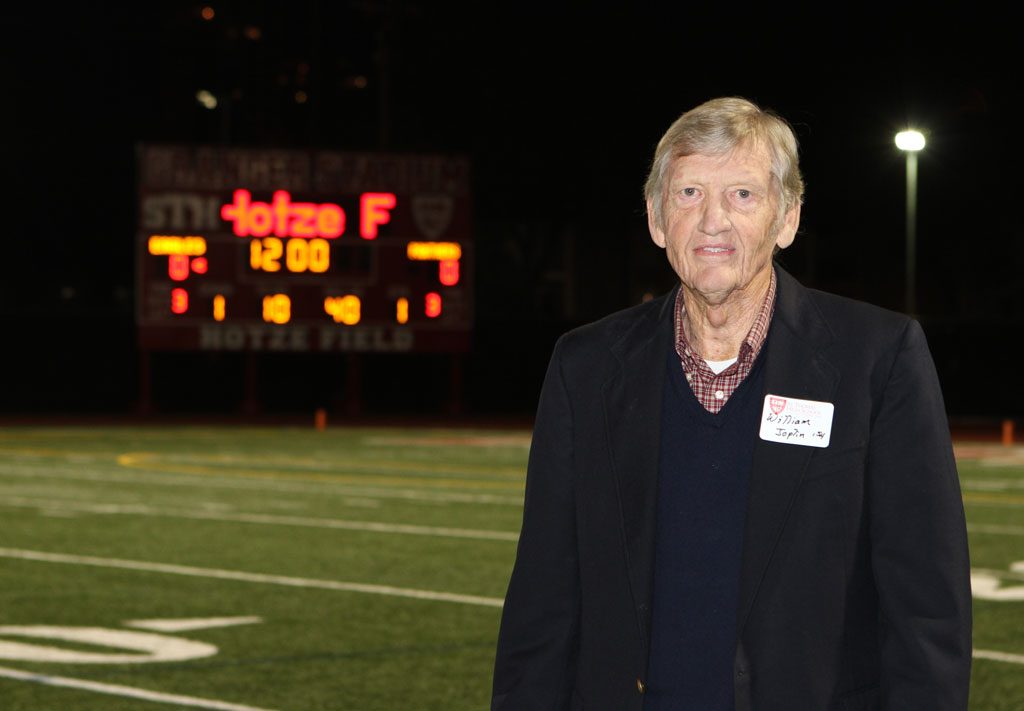 And now the resident “$6 Million Bill” is known to one and all, a one-time mystery benefactor turned magnanimous, saluting all in the STH community who have responded to the No Substitute For Victory Challenge, while still encouraging those who are still considering their involvement to make a decisive move during this crucial window when the donations can deliver the highest dividend.

“I want all our supporters to think about joining the cause,” Joplin said.  “Think about it hard and give, give, give … until it hurts … or until it feels good.  I know how good it feels for me to make this happen.”