Weldon Granger, a dedicated and vibrant advocate for St. Thomas for decades and long-time champion of Catholic education in Houston, will deliver the commencement address at the school’s 117th ceremony May 20.

Granger is the owner and managing partner of JonesGranger Law Firm headquartered in Houston, specializing in federal litigation and representation of members of the railway labor industry.  He serves on St. Thomas Foundation Board and was previously a distinguished and influential presence on the school’s Board of Directors, as well as the board of The Regis School of the Sacred Heart, animating the commitment to leadership through service.

“I have always had a deep admiration and appreciation for Weldon, his own brand of reserved dignity,” president Fr. Kevin Storey, CSB said.  “From humble beginnings, through incredible accomplishments, always striving to make the most of his abilities, to embrace his passions, he has never forgotten his roots, always with a strong sense of gratitude and giving back.  Weldon is an emblem of St. Thomas itself.”

Granger earned his Bachelor of Science in Industrial Engineering from the University of Louisiana at Lafayette and his Doctor of Jurisprudence from South Texas College of Law in Houston, establishing his law practice in 1974.

His lifelong blend of simplicity and success includes serving as the Chairman of the Board of Employee Benefit Systems and Valencia Hotels, Inc.  Granger was also a Founding Board member of Save our ERs, dedicated to improving the operation of hospital emergency rooms, and contributed as a founding member of the Academy of Rail Labor Attorneys, serving as its president.

Throughout his thriving professional career Granger and his wife Fran were steadfast in supporting Catholic education and its charities, with particular emphasis on making it possible for those less fortunate to share in the same opportunities as their own children. 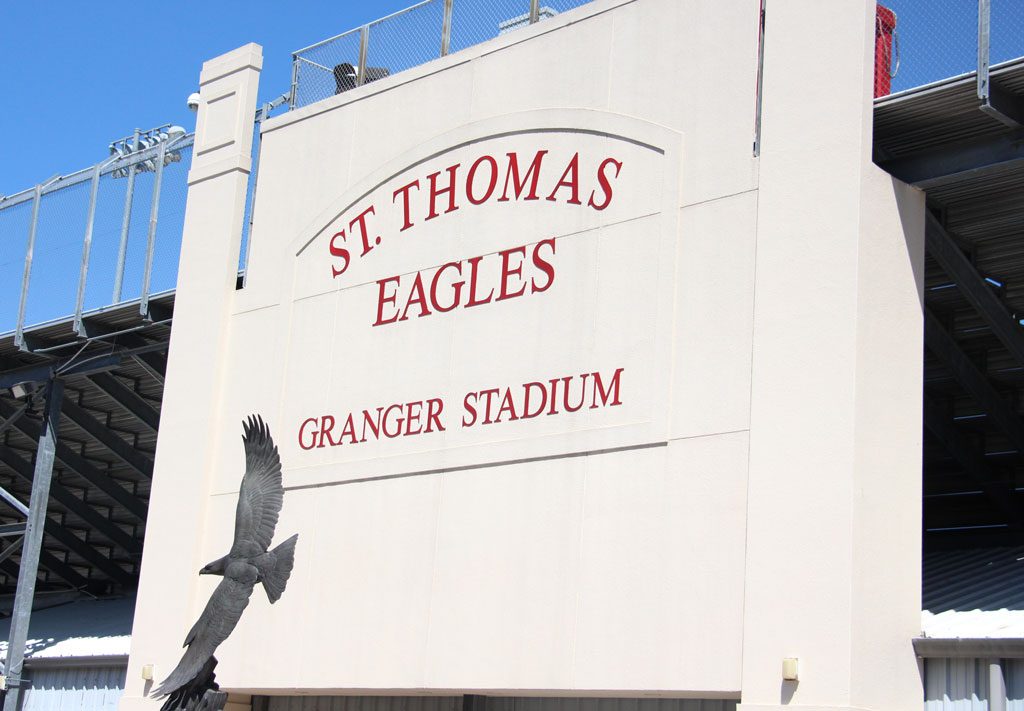 Granger will address the Class of 2017 in the stadium bearing his surname after a generous donation fueled the redevelopment for Eagle Football in 1995.  His is a compelling and inspirational voice for the next St. Thomas graduates primed to embark on their own paths, seeking to make an impact on the world.

“Staying true to God, to yourself and to your family, not focusing on where you start but your trajectory, that is what Weldon is all about,” Fr. Storey said.  “His example brings great credence to our Basilian mission.”

In 1995, Granger was honored as a Distinguished Alumnus by the University of Louisiana at Lafayette, where in 1998 he and Fran established The Willis Granger and Tom Debaillon Eminent Scholar Endowed Chair in Francophone Studies.

Granger’s zest for life extends far beyond board rooms and balance sheets.  His diligent philanthropy and love of art inspired him to be a patron for many young artists around the country, including as board member for the Museum of Western and American Artists, dedicated to promotion and patronage of western and American artists.

And Granger is a loyal activist for Guide Dogs of America, which provides seeing eye dogs to deserving participants at no cost to the individual, and which honored him with the Gift of Sight award.

Granger and the late Fran Debaillon Granger had three children, Jennifer, John and Jason, and seven grandchildren, ranging in age from 11 years to one year.