This story was originally published in May 2016

One of the most versatile and acclaimed track competitors to wear the Red & White provided the irresistible force behind the Eagles dramatic run to the TAPPS 5A track and field championship … and a sport which often occupies an obscure corner of athletic life will now forever carry the distinction of stamping the 100th state title in the rich and storied history of St. Thomas athletics.

“This is so apropos given how our track team is truly emblematic of what separates St. Thomas,” athletic director Mike Netzel said.  “Taking so many different types of individuals … jumpers … hurdlers … sprinters … throwers … vaulters … a complete mix of talent … speed and strength … all coming together with a unified effort to complete the championship result.  This group represents  a wide variety of personal backgrounds … complementary skills … and single purpose.  That’s the fabric that is St.Thomas.”

Four individual championship performances and a depth of contribution from throughout the roster produced the program’s first state triumph since 2005 … led by the uber-talented Landon Malouf ‘16 who paired power and grace to re-establish one state mark he had already owned while continuing his dynamo swirl of achievement.

The Eagle 145.50 team total outpaced Argyle Liberty Christian (131) and Dallas Bishop Dunne (96) … and provided a deep satisfaction for unassuming Nathan Labus who has consistently combined an endless perseverance and drive with a steady unwavering influence since joining the STH faculty and becoming head coach for the 2006 season.

“More relief than excitement,” Labus said.  “I’ve always believed we should have the top program.  There have been some near misses along the way which can be frustrating … injuries, bad timing, something not clicking.  But you take stock in the process.  Finally we’re on top. 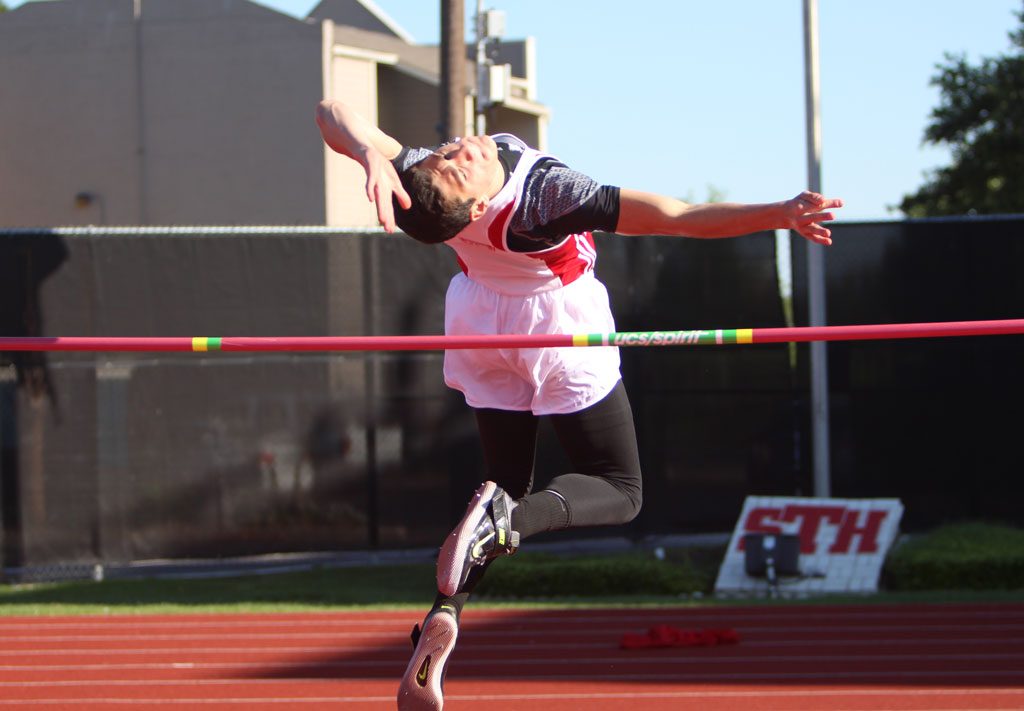 The Eagles were primed for peak performance with nine personal records in capturing the South Regional ad built momentum quickly in the opening session with Malouf tying for third in the high jump (6-02) and Peyton Matocha ‘19 producing a stunning second-place finish with 6-04.

All before the Eagles received a huge jolt from hard charging Jackson Odom ‘16 winning the triple jump with a leap of 43-08.50.

“I was first out of the draw and knew no one could touch me,” said the nephew of Hall of Famer and record-smashing Houston Oilers quarterback Warren Moon.  “If you don’t think you’re the best, you can’t be the best.  The focus was just do what you’ve been trained to do, not more than you need to do.  Don’t get caught up in the moment.  Take a deep breath, release the stress, let it fly.”

In the second session Malouf commanded the stage and rocked the Hart-Patterson Sports Complex at Baylor University … first blistering the 110 high hurdles in 14.17 seconds while lowering the state standard he established in 2015 (14.30) … then had enough octane to burn the 300 meter hurdles in 39.80 for his second individual state title with Ishmael Callandret ‘16 taking second in 41.35 at a pivotal point to push STH into commanding position.

“It’s really about focusing on that one event and what’s demanded to be most successful in that moment,” Malouf said as he bounced from event to event.  “The hurdles were the most challenging but the key overall is executing the masterplan.”

“Coach Labus told me I had to win this race,” George said.  “I knew I had to take the pace out fast from the start and still keep enough in the tank for the final 400 meters and the final kick.  Breaking the finish in first is a moment I’ll remember the rest of my life … knew we had the title all but wrapped up.”

The Eagle talent depth proved formidable throughout the closing stages.  Drew Addicks ‘18 took fourth in the 200 meters (22.96) and then teamed with Daniel Dolan ‘17, Abel Caillouet ‘17 and Andrew Neaves ‘17 for a fifth-place result and valuable points in the 4×200 meter relay.

By the time Michael Banks ‘18, Carl Collins ‘19, Neaves, and Michael Chaplin ‘17 clocked 3:31.89 for third place in the 4×400 relay … the Eagles’ state championship was firmly secure … as was a renowned place in school history.

Odom:  “That rush just doesn’t go away … probably won’t go away for a long time.  You invest all you have throughout the season … give all you can … and the reward is history.” 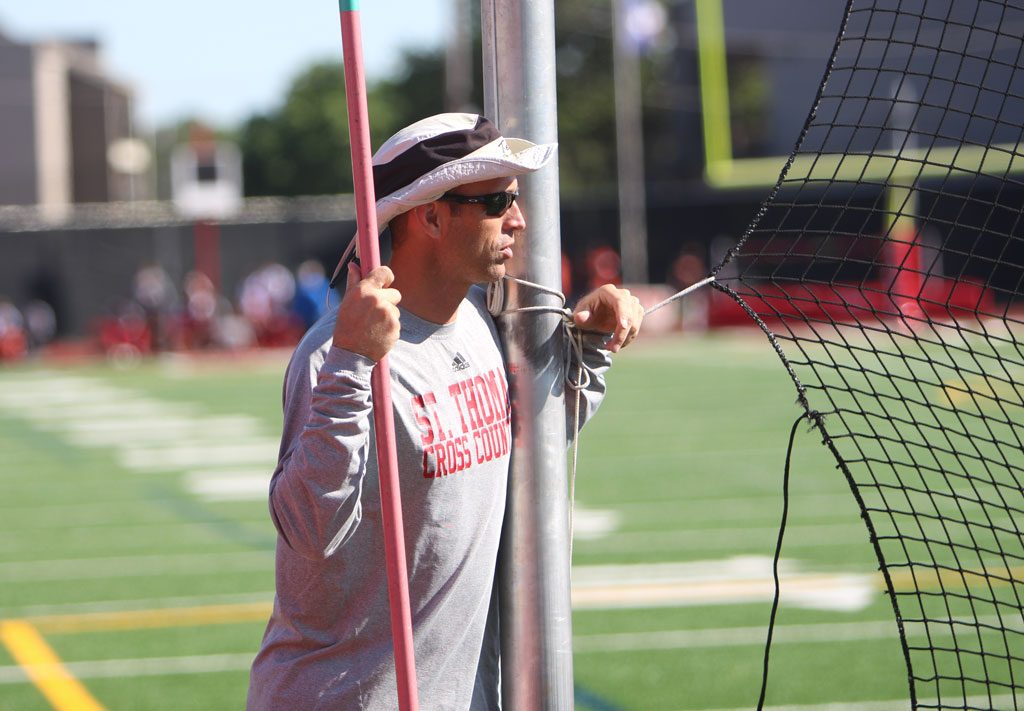 Netzel takes a particular pride in the breakthrough believing “that there could not have been a more genuine and loyal St. Thomas guy to deliver the 100th championship trophy for St. Thomas.  And Nathan didn’t realize it until I met him off the bus here on campus arriving from Waco.  He was thrilled winning the title.  Then I told him the greater significance and look on his face told me he understood the gravity … because he’s a St. Thomas guy.”

Malouf provided a suitable grand finale to his grueling multi-event assault across the state throughout the season and his three-year Eagle career.  He won four events for the second consecutive year to fuel the Eagles to another is long series of regional titles.  And in April he claimed another piece of STH honor by winning the 110m hurdles at the 89th Nike Clyde Littlefield Texas Relays … the first Eagle to stake an individual event at one of the most prestigious competitions in the country.

“He was our workhorse,” Labus said.  “So much dedication, discipline and motivation.  He’s driven to be great … and he is.  A rare, rare talent.” 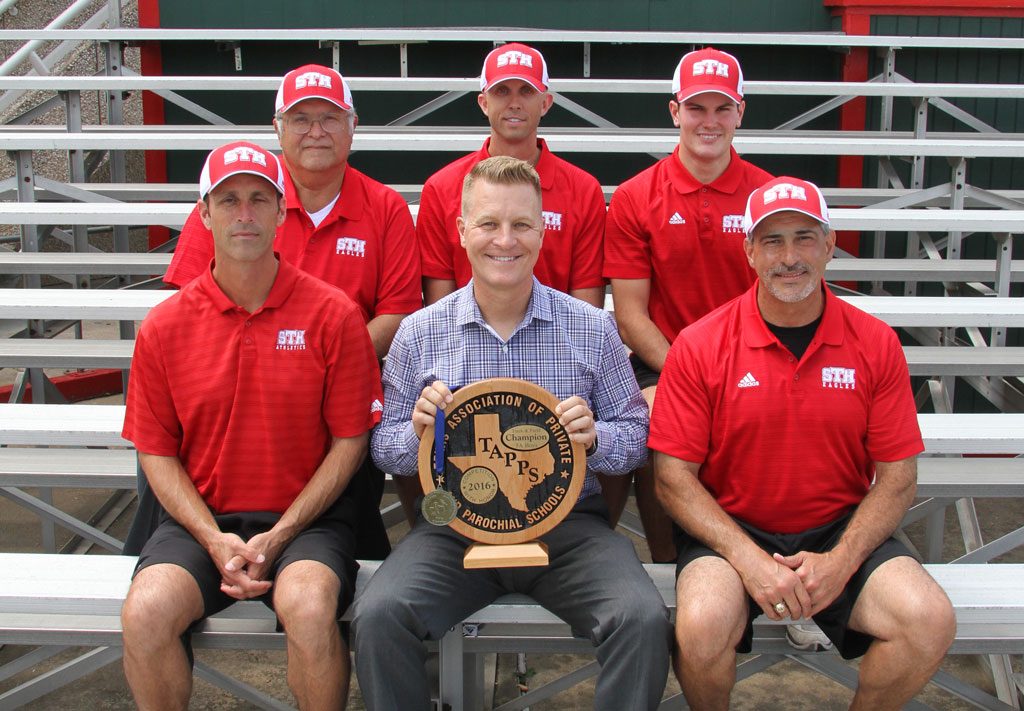 “This is what continues to defined the Basilian experience for generations,” Netzel said.  “Educating the complete person … commitment to faith, college preparatory academics and elite level athletics.  Success in every facet of life is the priority here and this is just another result that reflects the mission.”