When it comes to Round-Up … Eagle scholars have long mastered their ABC’s.

For the third consecutive year, the like-minded and aspirant harnessed a collective and aggressive late surge to ignite an outburst of raffle ticket sales which generated a Glengarry-esque frantic Friday finish that would have had Ricky Roma riveted and Blake ordering coffee for one and all.

The assembled crowd for the late afternoon reveal watched the Senior Board parade into Granger Stadium flanking a classic Rolls Royce Silver Spur.  Dean of students Rod Takacs, with an award-winning caliber performance lending new meaning to the term “sandbagging” as it relates to Round-Up, acknowledged a not-to-be-ashamed total of less than $553,000, well short of the projected goal. 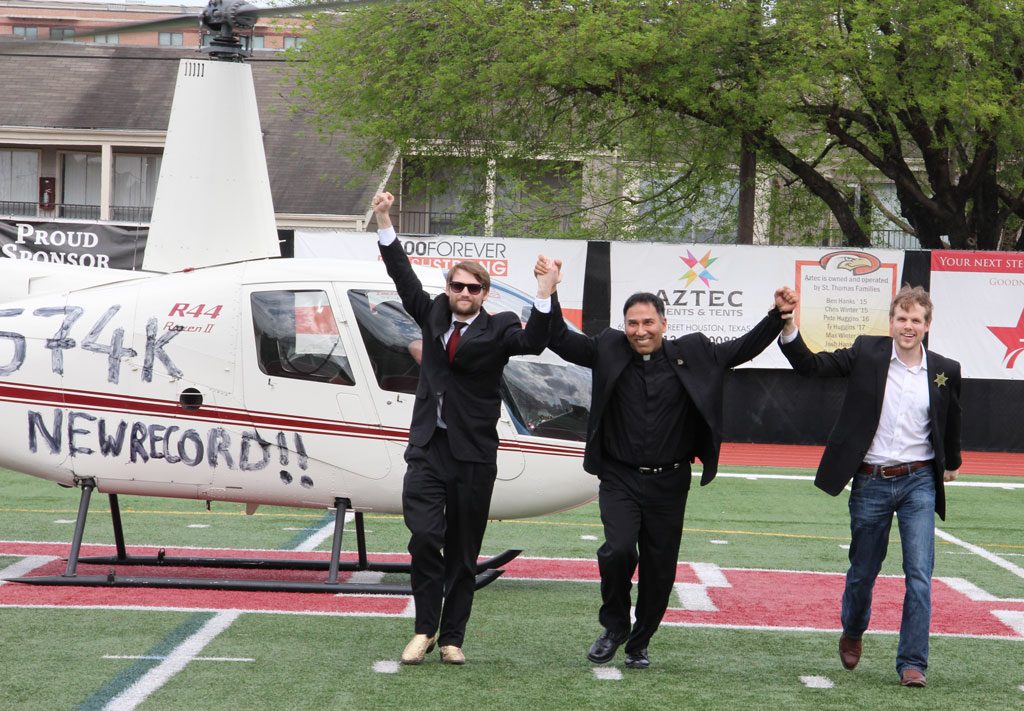 Round-Up yet again bigger, better and more robust, for the 15th consecutive year, crashing the $500,000 threshold for the third straight year, with all monies annually and always devoted to St. Thomas tuition assistance, a Basilian practice which dates for 91 years. 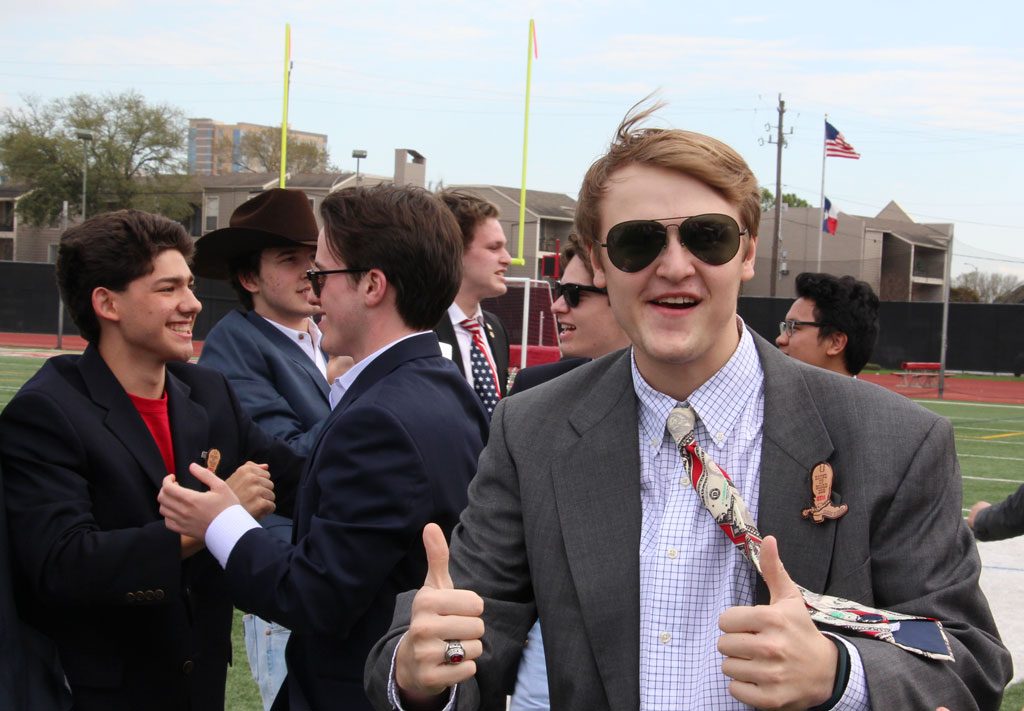 And nowhere in the student community is the Basilian motto Teach Me Goodness, Discipline and Knowledge more alive and in full force.

“Round-Up is not a gimmick,” Fr. Storey said. “It’s not a temporary trend that quickly washes away. People who share our history and many others with no connection whatsoever respond to our students, their genuine efforts resonate. We have employees of other private schools buying books of tickets. It’s how we teach goodness. When students have coursework, other priorities, they make a sacrifice in present time so that someone will have a better life next year, or in five years.”

Eagles arrived on campus March 2 needing to collect almost $100,000 in less than six hours in order to rebrand the Round-Up standard. There was a conscious decision by the St. Thomas administration that a deep-pocket donor would not be solicited simply for the sake of record-busting.  Students hurled themselves into the challenge like divers from the dock. By 12 noon, the total sales suddenly swelled to about $500,000, and then rocketed within the next 90 minutes, squeezing past the 2017 standard of $572,808. 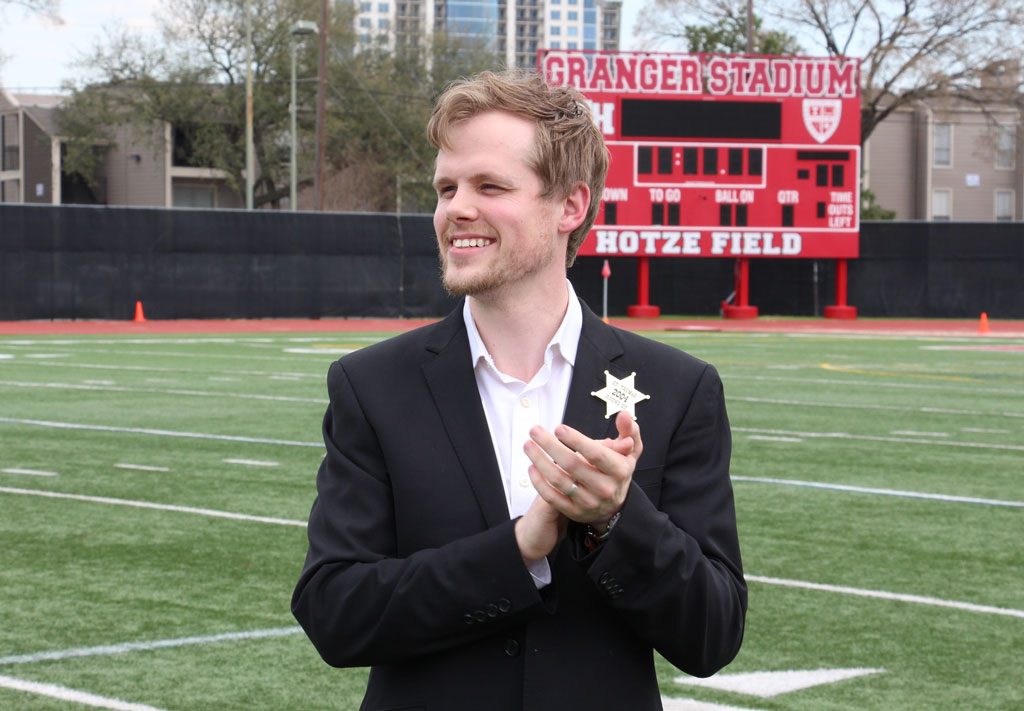 Deja vu. All over again.

Largely because of a dogged determination and keen understanding of the decided difference between desire and achievement. With a group of seniors at the vanguard who embraced a not-on-my-watch mentality as it relates to rip-roaring Round-Up results.

“I was the pessimist this year,” Green said. “I didn’t think we would get there. It started with Hurricane Harvey. And then some other circumstances. But this is what strikes me more than anything else … every quota counts. Every single quota counts. The difference in breaking the record this year and not amounts to about six students selling or not selling their quotas.” 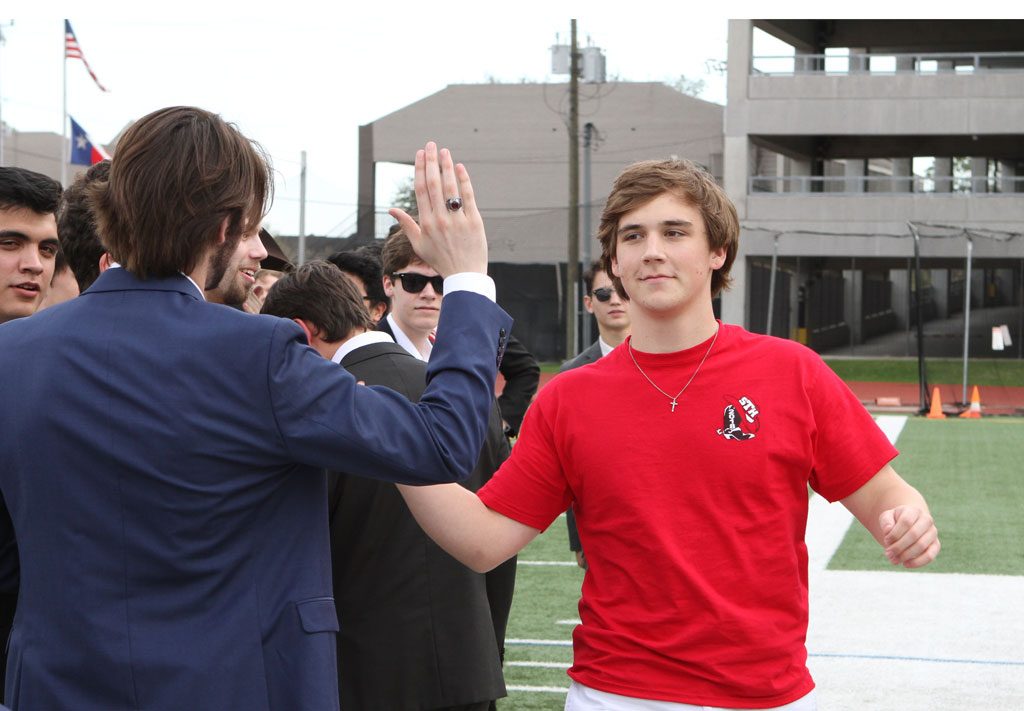 Out front in individual sales was Brendan Hotze ‘21 in what has become a lasting family tradition. His $22,469 came in the immediate wake of his older brother David ‘17 leaving as the top Round-Up producer each of his four years.

“I would call people multiple times until I got some kind of answer,” Hotze said of his throw-back entrepreneurial tactics and techniques clearly absent from machine learning analytics and artificial intelligence. “I even went door to door. Got some rejections, sure. But I just kept going.”

And that persistence proved the prevailing thought that there is no heavy Round-Up hitter like a Hotze.  As a freshman in 2014, David ‘17 racked a mind-numbing individual total of $62,970, easily the largest single stake in Round-Up history He then closed out as a senior just as be broke as a freshman, the leader of the pack, his $25,340 advancing his cumulative four-year total to a staggering $132,490.

Brendan promptly served notice that perhaps no Round-Up record is safe when a Hotze is hovering.

“There was never any pressure to reach a certain amount or live up to years past,” Brendan said. “It was just something I wanted to do for St. Thomas. What means the most is future Eagles having an opportunity to attend St. Thomas, a Catholic institution where teachers and classmates care about everyone.” 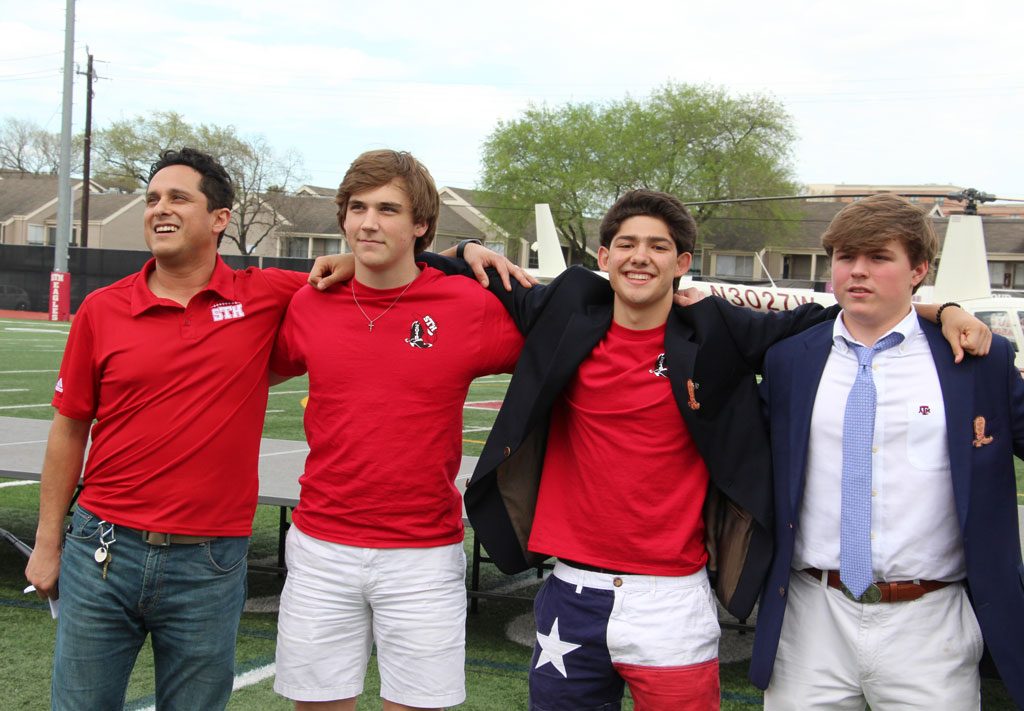 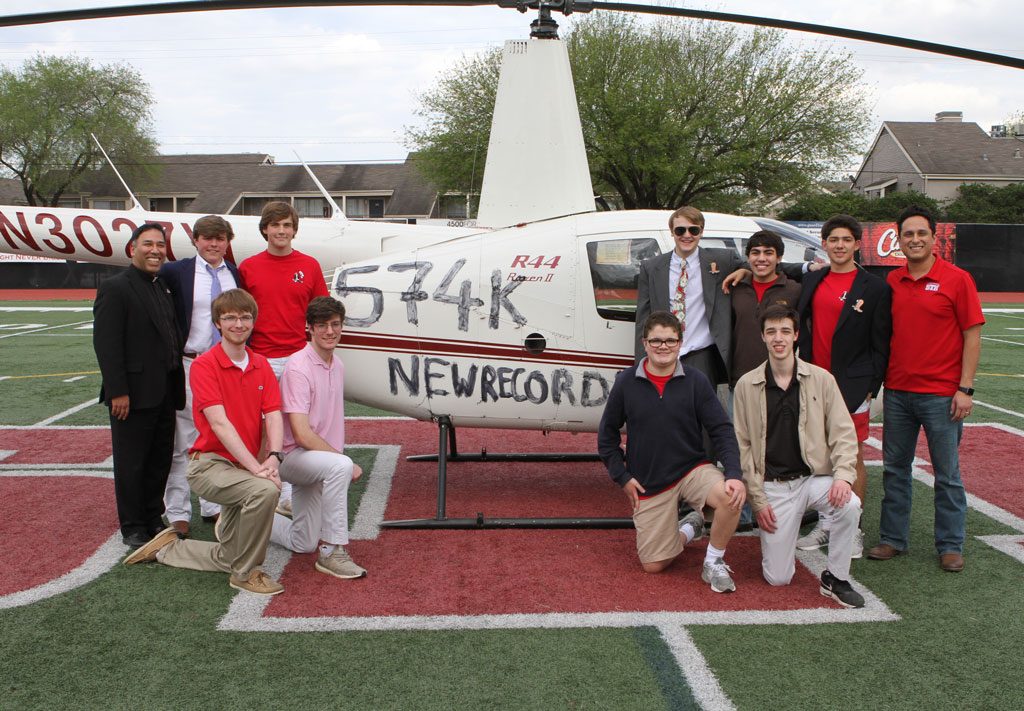 And linking it all was a relentless dream-big, no limits pursuit, Eagles not motivated for personal acclaim or gain, but for the powerful impact on future students, many of whom the ticket sellers will likely never know, never meet, all for a colossal greater great of St. Thomas.

“The energy from the student body was measurable,” principal Aaron Dominguez ‘96 said. “They truly took ownership. I was in the room with the Board when Fr. Storey indicated they had made the mark. That group erupted. An awesome feeling.”

Dominguez recalls his own student body totals from the mid-1990s maxing out at “roughly $150,000” in what now seems to be a shadowy Mesozoic Era. 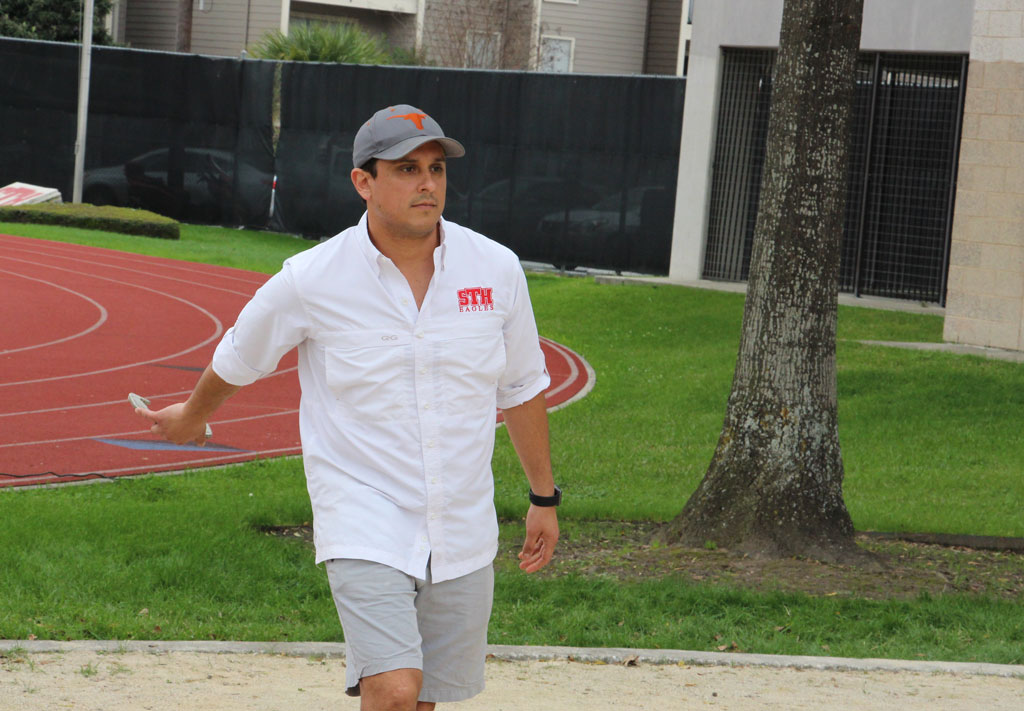 His initial year as principal stirred his own Round-Up revival, “a connection unlike ever before. I saw old friends and joined so many of our current families … and just appreciated this from a much different perspective. Much is the same. I see the Bonanza Booth which has been run by the same family for more than 40 years. And in another area of Reckling Gymnasium is the Big Red Market which has taken us to a completely different level. I teamed with Jeff Camp (class of 2016) and we finished third in the Horseshoe Tournament. This really feels like home.” 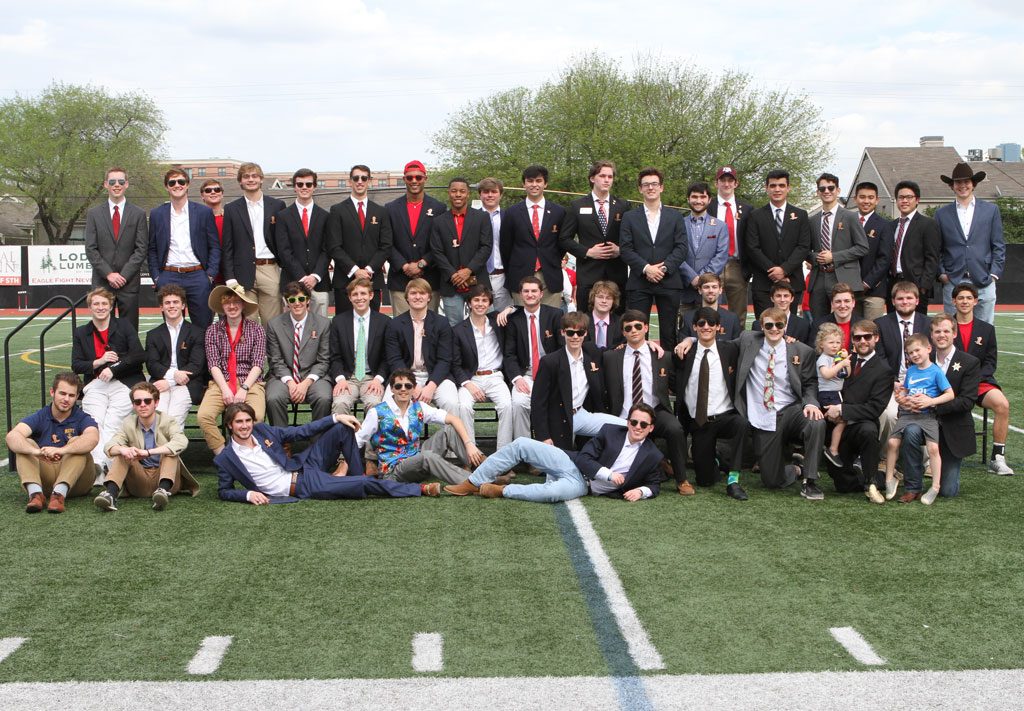 But the most indelible benchmark for Round-Up remains the students’ resolve in refusing to accept the inevitability that one year the sales record simply will not fall.

“The senior leadership drives this,” Green said. “For three years students see what happens. They hear what has gone on for decades and generations. Eagles helping Eagles. It’s the culture of St. Thomas.”