#TBT St. Thomas Presents ‘West Side Story’ | A Pulsating Performance that Packed a Punch as Well as the House

This story was originally published in April 2016.

A landmark musical show written in the 1950s, based on a play from the 16th century, with overtones as fresh and familiar as new millennium headlines – the cautionary tale of intolerance breeding hostility that erupts into tragedy.

And the St. Thomas spring production of West Side Story delivered a pulsating performance that packed a punch, as well as the house, for an extended four-night engagement at the Moran Fine Arts Center in Cemo Auditorium.

“The biggest take away … we precisely had the right group to embrace the challenge,” director Dan Green says. “From the actors … to the costume makers … to the orchestra … to the choreography … many hands make for light work. When the students put their hearts and souls into something … the results are usually remarkable … superseded my expectations which are always extremely high.” 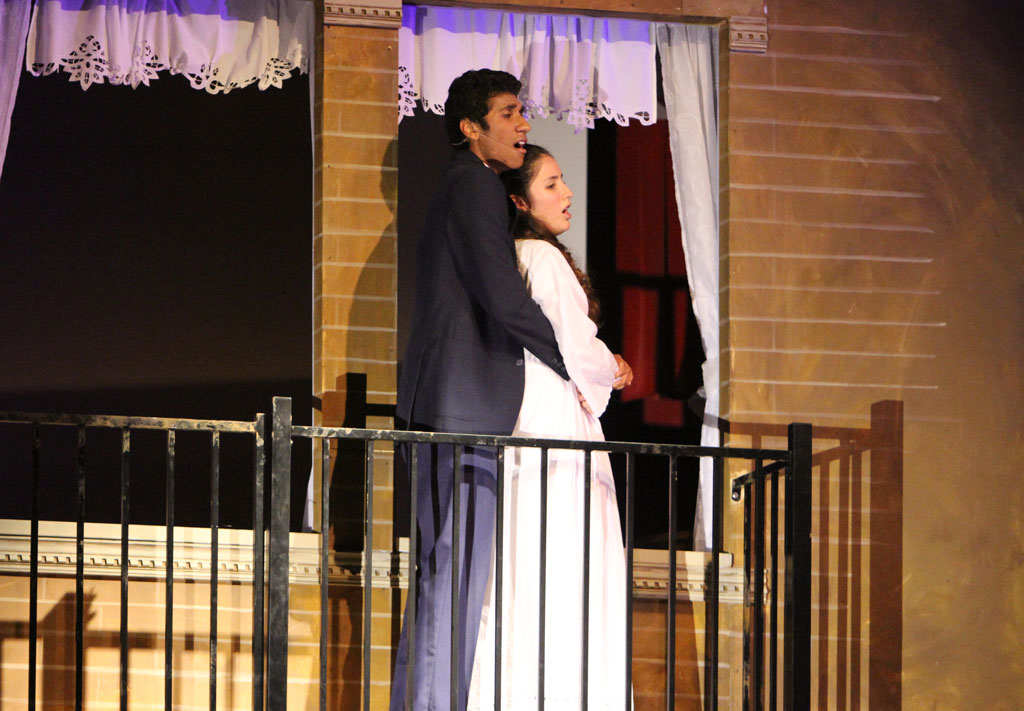 For the first time, St. Thomas portrayed the emotion ridden Romeo and Juliet theme played out on the concrete pressure cooker of 1950s Upper West Side of Manhattan. The focus was a senseless turf war between rival ethnic gangs, the Sharks and the Jets, complicating the star-crossed romance between Tony (Wayne Babineaux ‘16) and Maria (Jacqueline Vasquez ‘16, Incarnate Word Academy), ultimately leading to the rumble which leaves death and heartbreak in its wake.

Babineaux proved a forcefully moving Tony, a former member of the Jets and best friend of the gang leader Riff played by Travis Carroll ‘16, all strongly supported by Pamela Zambrano ‘16 (SAA as the fiery and assertive Anita and Parker Robertson ‘18. In only his second STH production the savvy and seasoned Robertson often seized the stage as he captured the colorful and explosive Action. 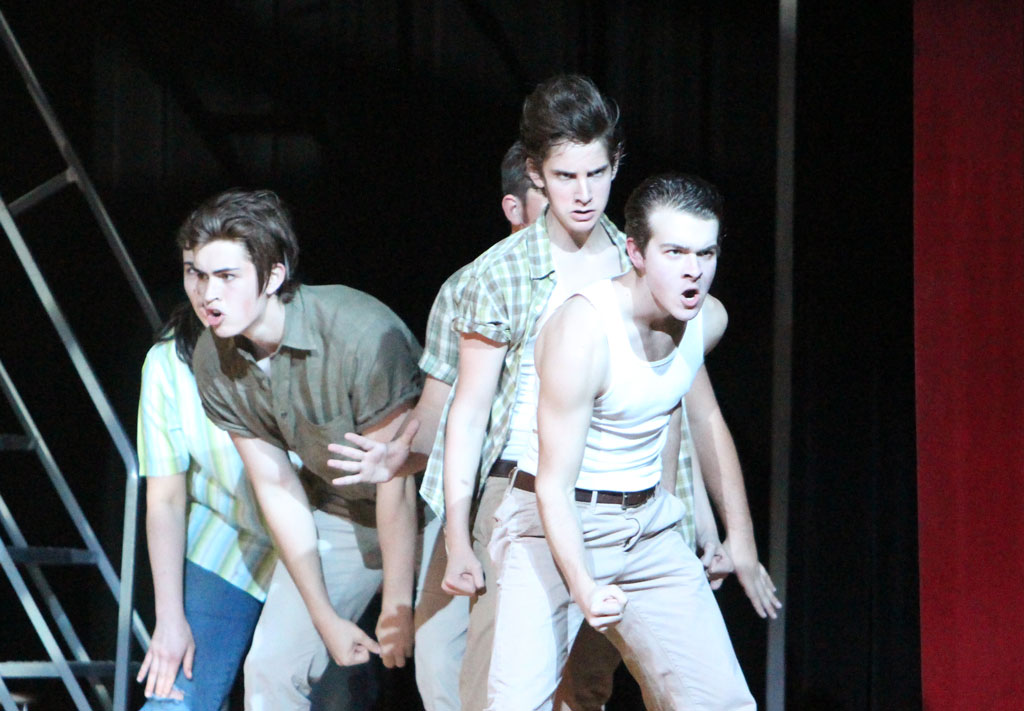 “Parker did an amazing job but he was certainly not alone,” Green says. “Wayne brought so much to his character after playing a number of principal parts in the past. This was his show. Adrian Fonseca (Bernardo) and Antonio Herrera (Chino) both had some great moments. Travis sang three leads. His is the first voice the audience hears and all were first rate. He absolutely set the mood for what’s to come over the next two hours. And I was so pleased with our female leads, incredibly demanding parts, and each executed so beautifully.”

The subject matter of West Side Story is surprisingly and sadly topical, as gang violence, corruption, and racism still ravage the world. 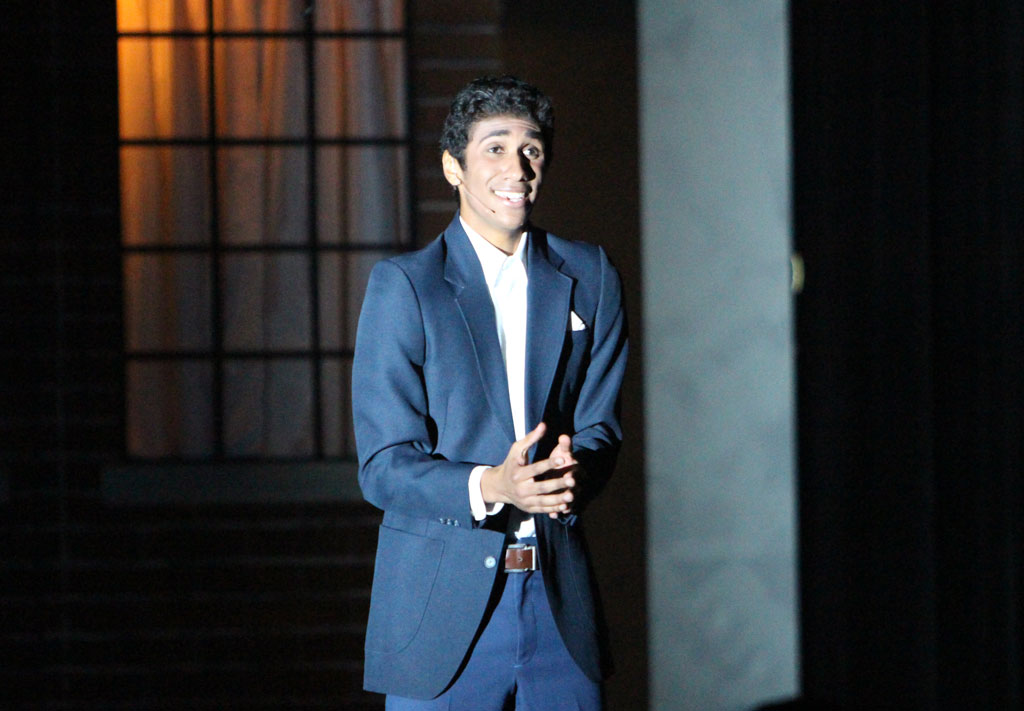 “There are some tough moments in this work, no question,” Green says. “For example, the attack scene on Anita. The actors intently worked that scene. We first treated it as a dance, just going through steps, detaching from the intent. But that significantly shifts the tone. With the addition of the music they all responded. A very powerful sequence.”

Green was confident his cast and crew could meet the exacting standards demanded from a classic which debuted on Broadway in 1957 and received six Tony Award nominations. The film was named the best picture of 1961 and won 10 Academy Awards.

“We’ve done a lot of Shakespeare and I love Sondheim and Bernstein,” Green says. “I thought we had the right voices for it. The last few productions have been whimsical and fun. This was something more poignant. As soon as we announced the choice there was tremendous buzz in the theater groups … the tryouts stacked. We enjoyed the largest attendance we’ve ever had. Must have been the right course to take.” 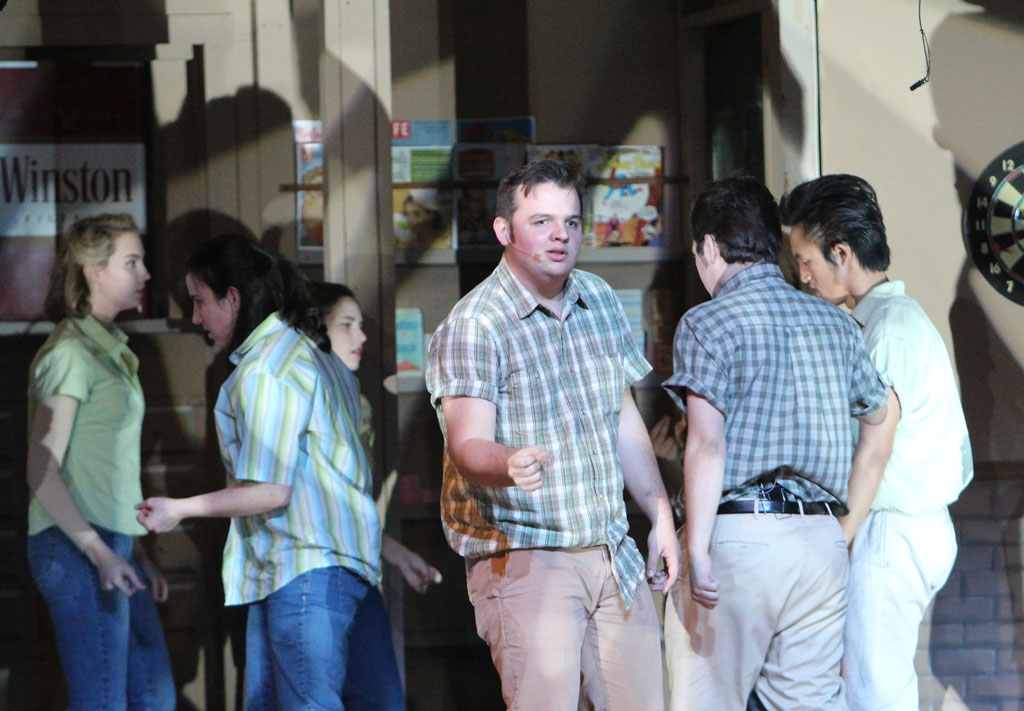 The strong blend of drama, dance, and music folding into a rich artistic whole involved a 60-member cast including Lucas Yuan ‘18 (Pepe) and Thomas Quintero (Indio) joining Fonseca and Herrera among the Sharks, plus Jake Morreau ‘18 (Ice), Isaac Flanagan ‘18 (A-Rab), Alec Jordan ‘17 (Big Deal), James Furrh ‘16 (Baby John), Cameron Mills ‘19 (Rocko), and Jacob Smith ‘17 (Snowboy) among the Jets. The tension and rivalry was acted out through dance in numbers like “Cool,” or strutting to the complex and lyrically lively “America” and “Dance at the Gym,” all in the midst of innovative jumps, robust athletic dance, and synchronized movement with hints of ballet.

“We’ve had this size production before with Fiddler on the Roof and Beauty and the Beast,” Green says. “We paced our rehearsals, blocked it so we could walk the scenes through and then run the scenes over and over. Honestly, we were not where we needed to be until two weeks before opening night. There’s always that small amount of fear … can we get this down. But then the dancing happens, a couple of kids step up, then they all step up, and it’s got legs.” 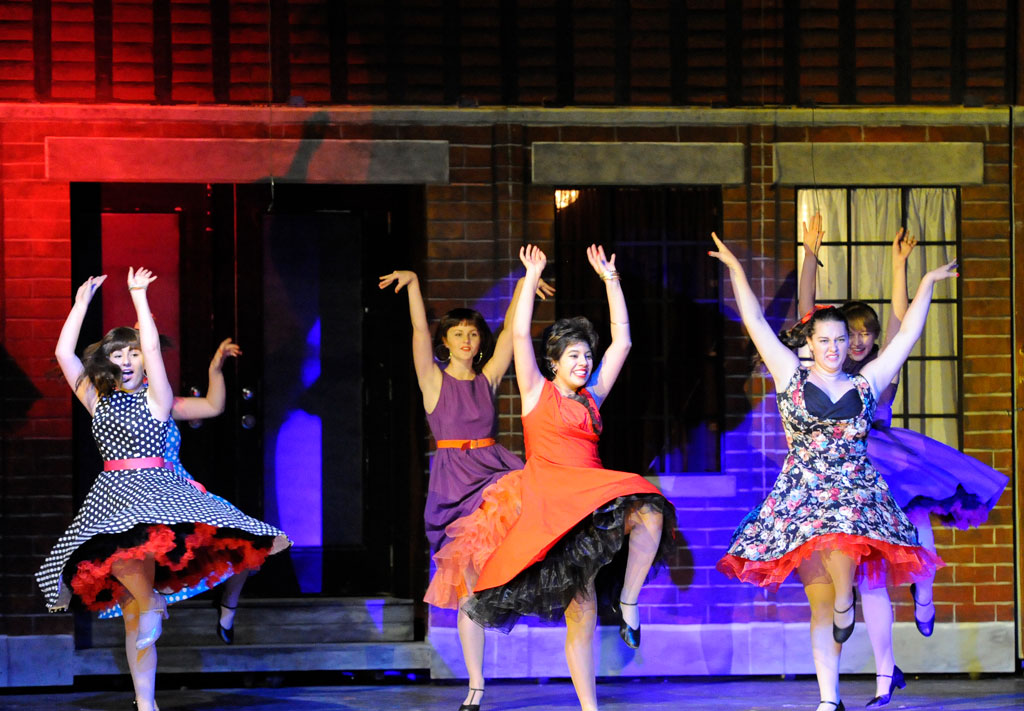 “Without question it’s one of the most intricate sets we’ve had and ours are routinely among the best you’ll find anywhere,” Green says. “Fuchs, Gensheimer, and Fuchser are the heavy hitters … great attention to detail … so creative in maximizing our space and resources. Steve Green is always lending his skills. Mary had her kids involved in our productions years ago and remains involved. You cannot say enough about all that they bring. Critical to our success.”

West Side Story thrilled sizable enthusiastic audiences proving that this extraordinary fusion of music, movement, and story again makes for timeless entertainment. The raucous weekend supplied a more than suitable climax to the memorable St. Thomas careers of Babineaux, Carroll, and a host of highly dedicated, talented cast and crew members from the class of 2016 including Seth Dalton ‘16, the first student to serve as accompanist. He began mastering the score in November, performed throughout rehearsals. Green praised the efforts “as one of the most important reasons for our show’s success. This was his seventh St. Thomas production and never got to take his final bow.” 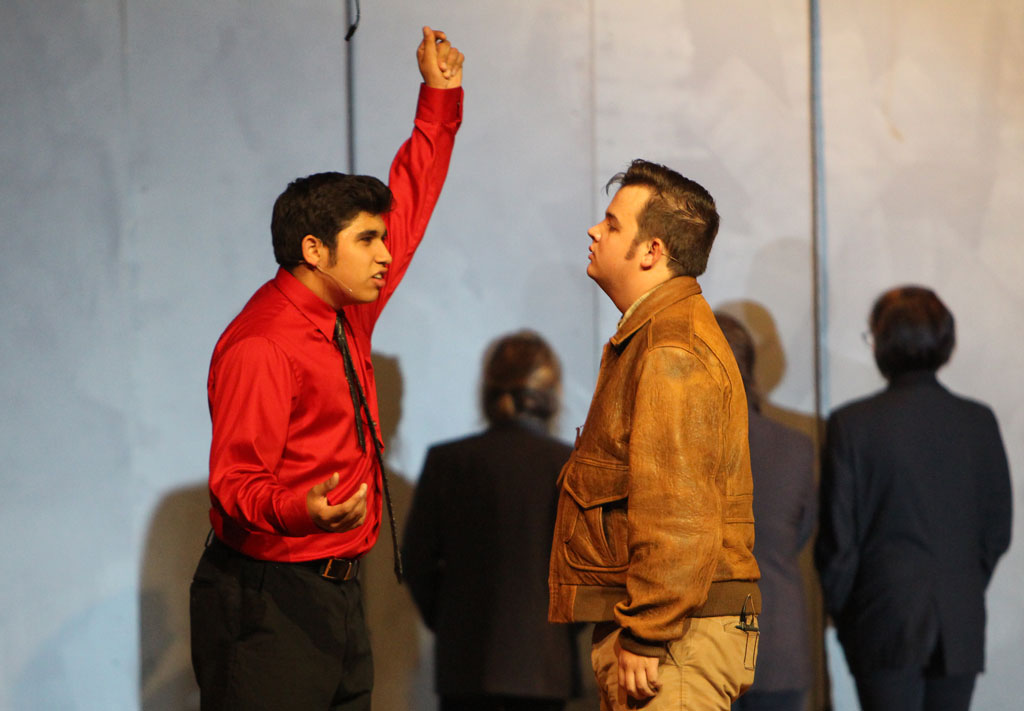 Green was left with some final thoughts before the next STH curtain rises. “Griffin De Claire (Doc) reminded everyone during one of our final rehearsals that every part matters. There are no extras. And that’s how we’ve always tried to promote the general philosophy of the program. All are invited to the show. Bring you gifts.”