Seven St.Thomas luminaries received the greatest recognition afforded an Eagle student-athlete … inducted into the St. Thomas Sports Hall of Fame … remembered and revered at a ceremony before a vibrant and supportive crowd April 29 in Cemo Auditorium.

Alphabetically, the 2017 inductees are: 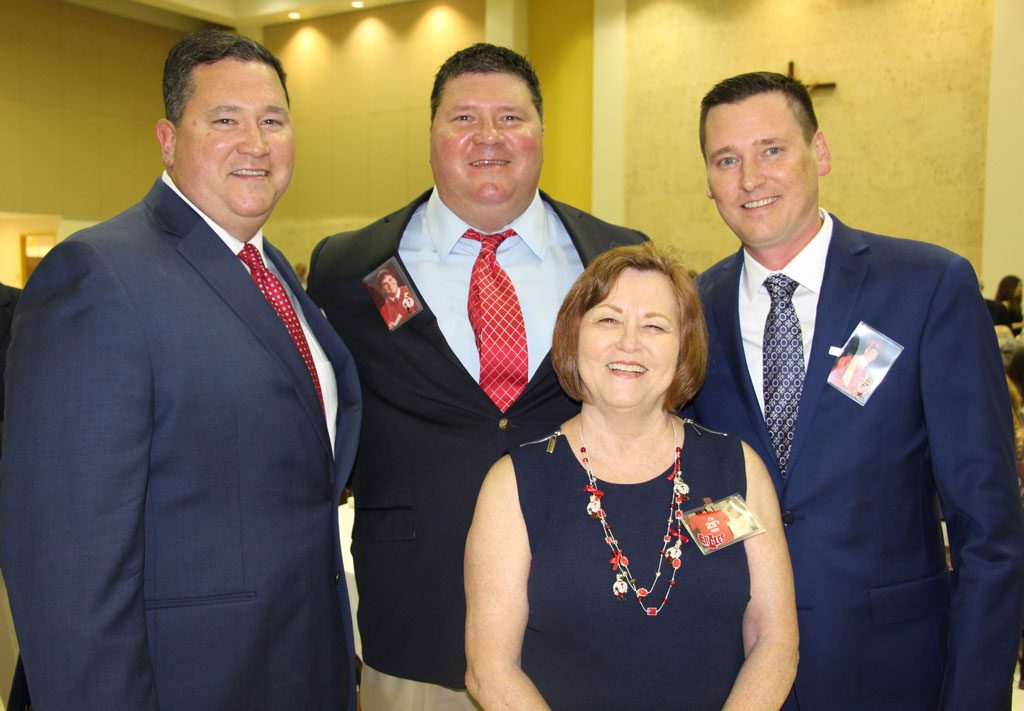 God has truly had a plan for my family … taken us in some interesting directions.  My father passed away in 1985 … just as I was arriving at Arkansas for my freshman year.  My two brothers were quite young … David was 14 and John was 11 … my mother (Roxanne) held us all together when I couldn’t be there.  I had an opportunity to attend any school in Texas but I chose Arkansas … (knowing) something was there … trusting in God.  My freshman year I met my wife and we’ve had quite the journey … but it all comes back to St. Thomas … I’m truly honored and humbled. 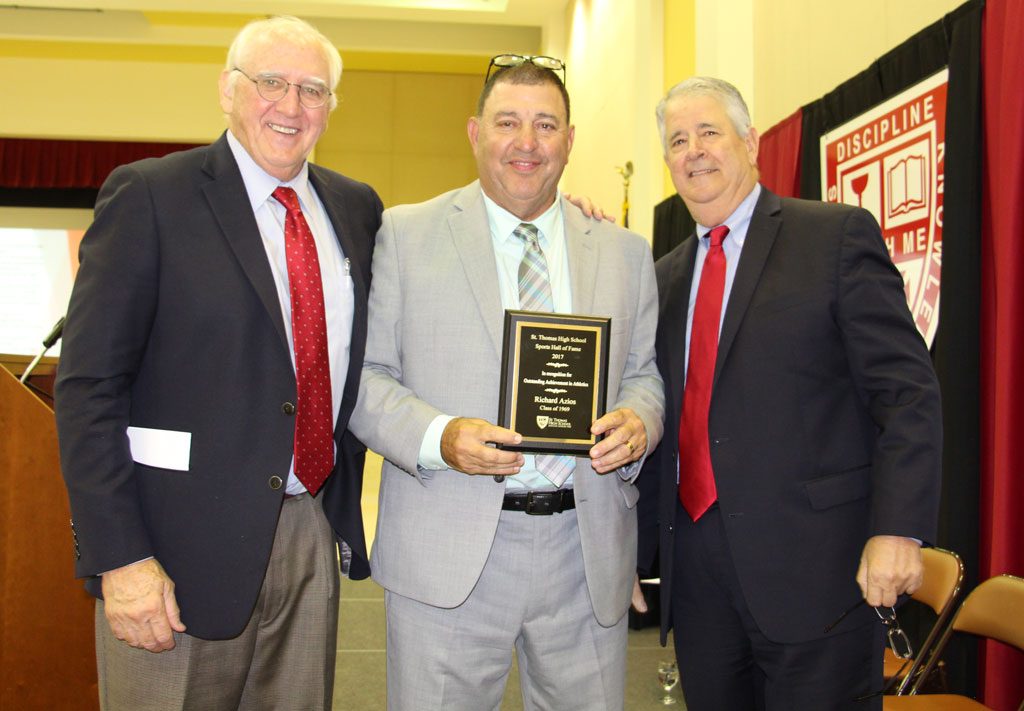 It’s been 50 years since I went to school here … (and) God had his hand in this … My dad once told me that St. Thomas is the best thing to ever happen to you … and he was right.  St. Thomas changed my life.  It’s a brotherhood … (that we) didn’t really realize until we left.  A Hall of Fame at any level … it’s the people you’ve known who care about you and love  you … the classmates … and I want to thank all of them because they’re the reason I’m here.  This is an honor … a dream … and thanks to everyone who was involved, the committee, for allowing me to be here and enjoy this. 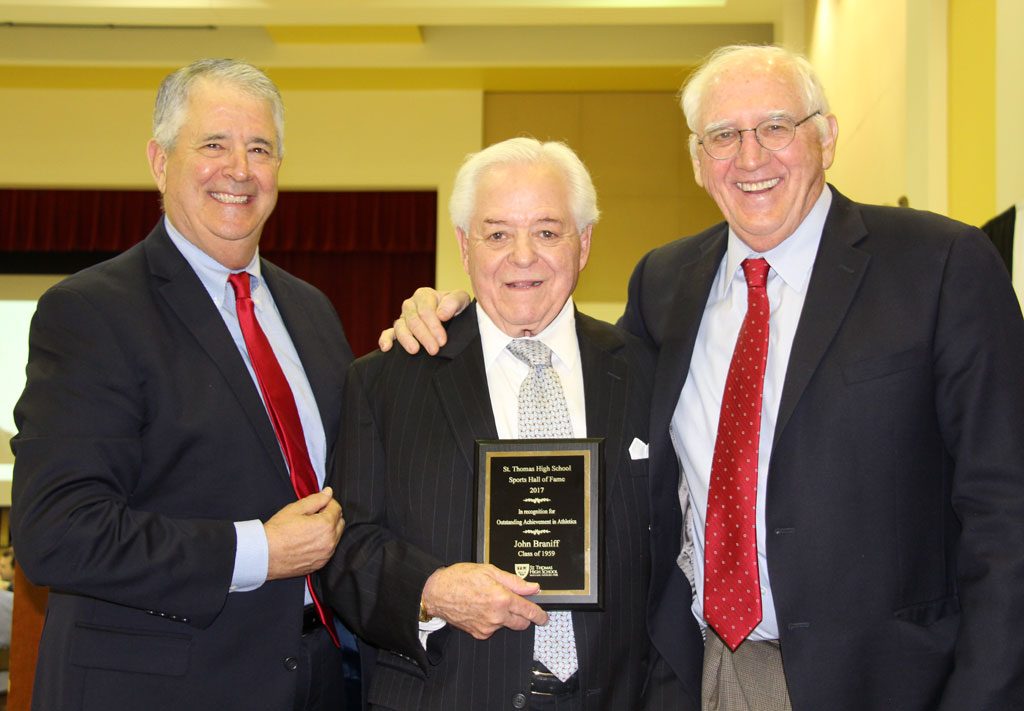 I’m most grateful for the friendships I developed here, the teammates that I had.  All that carries forward in your life.  And when you think of where you’ve been and where you are today, it comes from friends, teammates and coaches like Fr. Wilson.  And when (high school) is done, not only is the education so important to all of us, it’s the culture that St. Thomas provides (for us) to take forward into our family lives, our civic lives.  Again, I am most grateful and most humbled.

I would say the reason I’m here is that I’m lucky … lucky to have grow up in the 1950s when there were sandlot games all over Houston … lucky when I was nine-years-old to have my dad construct a pitcher’s mound in our backyard … lucky to attend St. Thomas … lucky that when I first came to campus to be surrounded by superb athletes and wonderful teams … and lucky to be standing here tonight.  Last April I left Baylor Hospital … after three months … arrived in an ambulance … unresponsive in ICU for six weeks … a tough time.  When the fog cleared I was unable to walk … in rehab for several months … many of the people who I got to know in St. Thomas came to see me and they’re why I’m here … the positive energy helped my family and helped me survive.  Thank you so much. 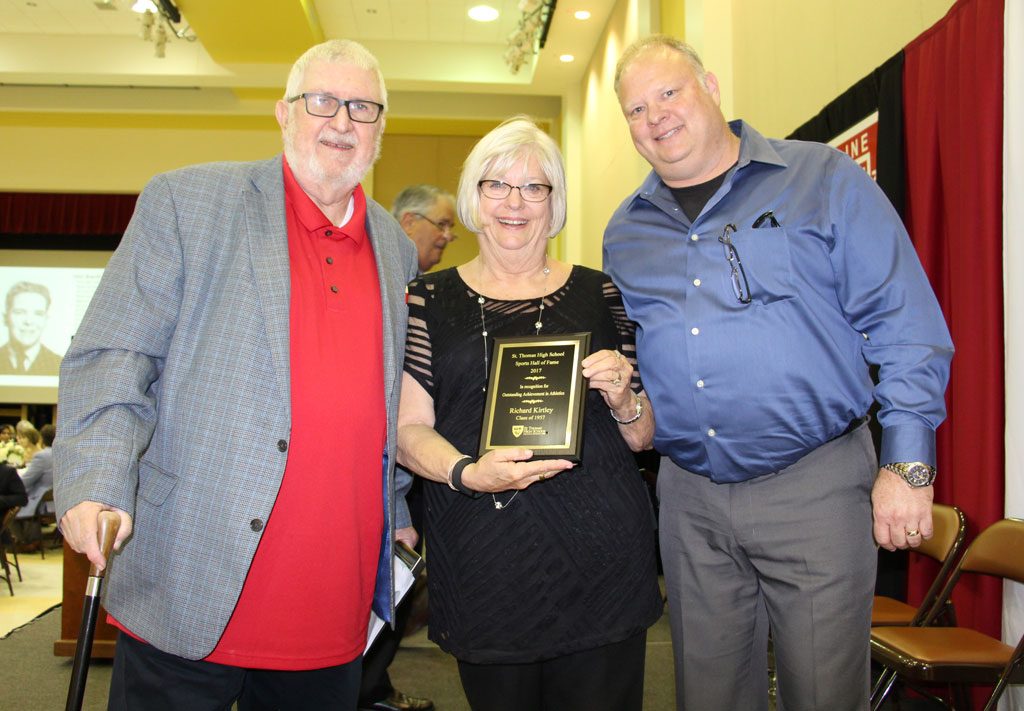 Close friend Bill McCurdy ‘56 (left) spoke for Kirtley, beginning with some notes the inductee had prepared for his acceptance speech.

I am pleased, honored and humbled to accept this award and join previous recipients who I admire and respect.  A very special thanks to the board for selecting me and a enormous salute to all this year’s nominees.  And thanks to those of you who supported my nomination.

And McCurdy then added that “I know if Dick were here, the first name he would mention would be Oscar Padillo.  And thank you to my wife and family, my extended St. Thomas family and friends.” 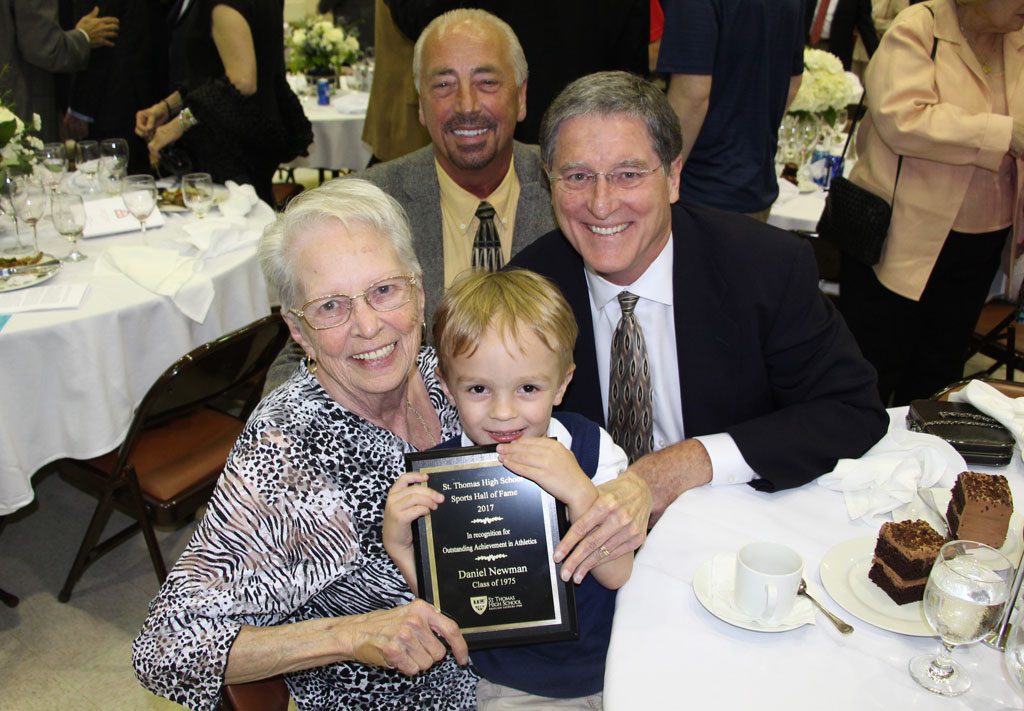 (Looking back) I want to thank all in the faculty for their dedication and vision, and my coaches for their instruction.  My freshman year coach (Jim) Schwarzbach was still trying to figure out who we all were … lined us up for sprints in fours … I’m a semi-lineman with two sprinters and a running back … came in about 10 years behind them in the 40-yard dash … and Schwarzbach comes up to me and says ‘You remind me of a mule running with a bunch of thoroughbreds!’  Thank you for that motivation … I believe each and every person who attends St. Thomas is a better person as a result of the mission.  I feel truly blessed to receive this honor. 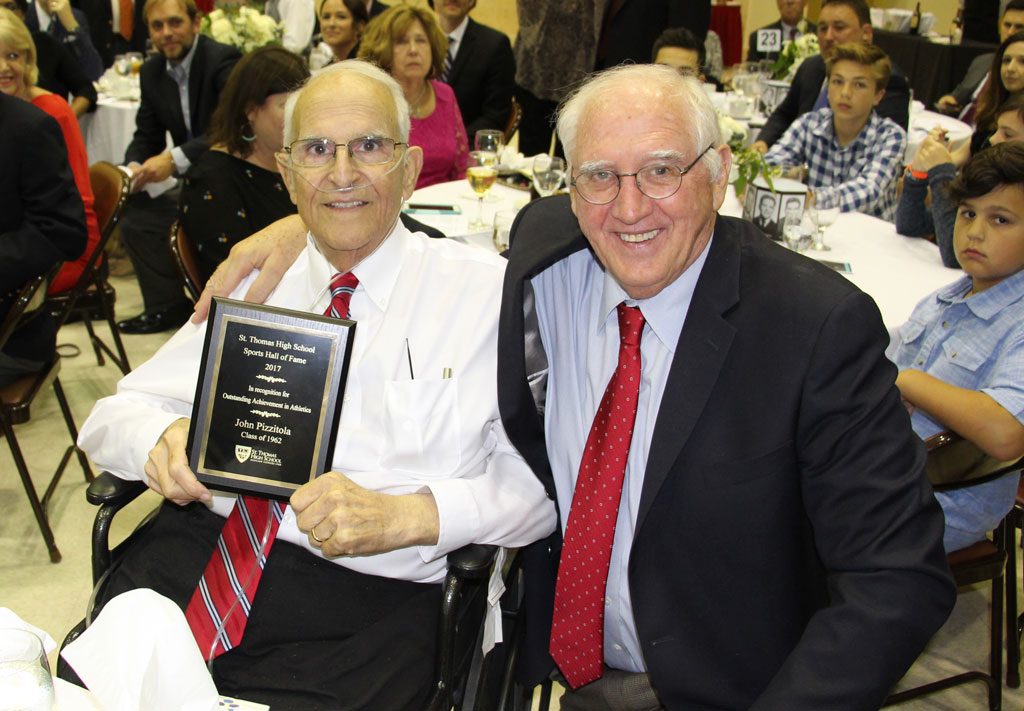 Pizzitola’s son Jared delivered the acceptance speech on behalf of his father.

I want to thank the committee for including me in this most prestigious group.  This is a true honor.  I am so proud of my school, and all the classmates and alumni I have met throughout the years.  I have never met anyone who couldn’t respect St. Thomas.  I had so many special friends and priests who were an influence on my life.  I am equally proud of the many friends I grew up with in Galena Park, many of whom are here tonight … Knowing the list of all those selected in front of me for his honor makes it all the more special to be included … I count all 171 classmates as my special friends and want to close with the memory of the most special one, the most popular in our class, Benny Tinerella (who) was killed in an car accident eight years after our graduation and remains the heart and soul of the Class of 1962.  Thank you again for this honor and remember the Eagle flies on Friday. 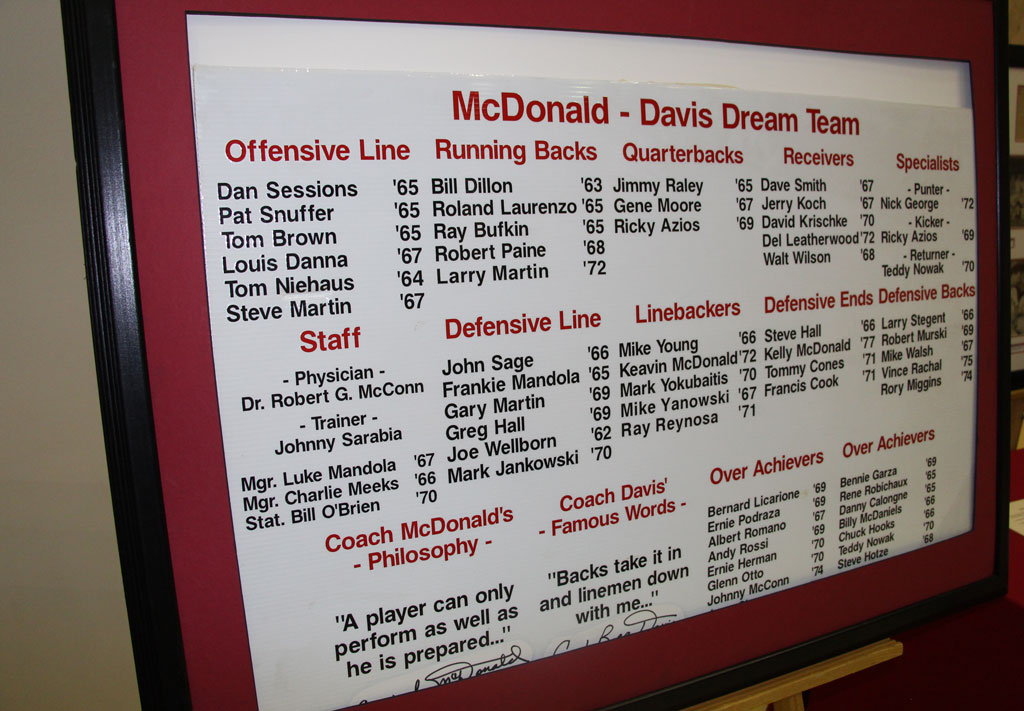 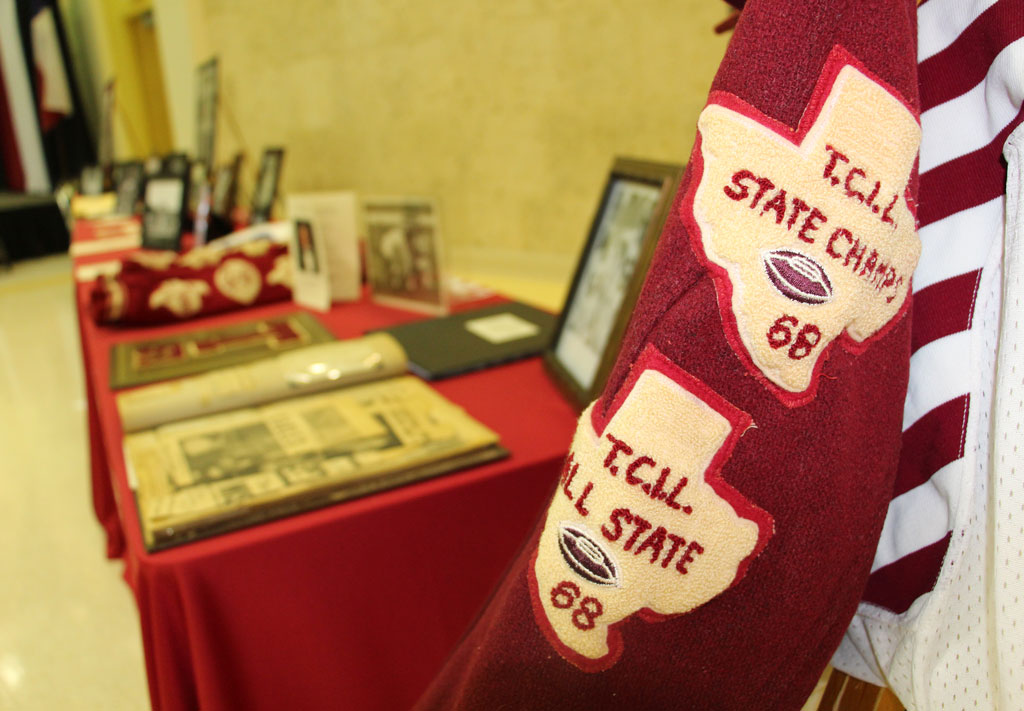 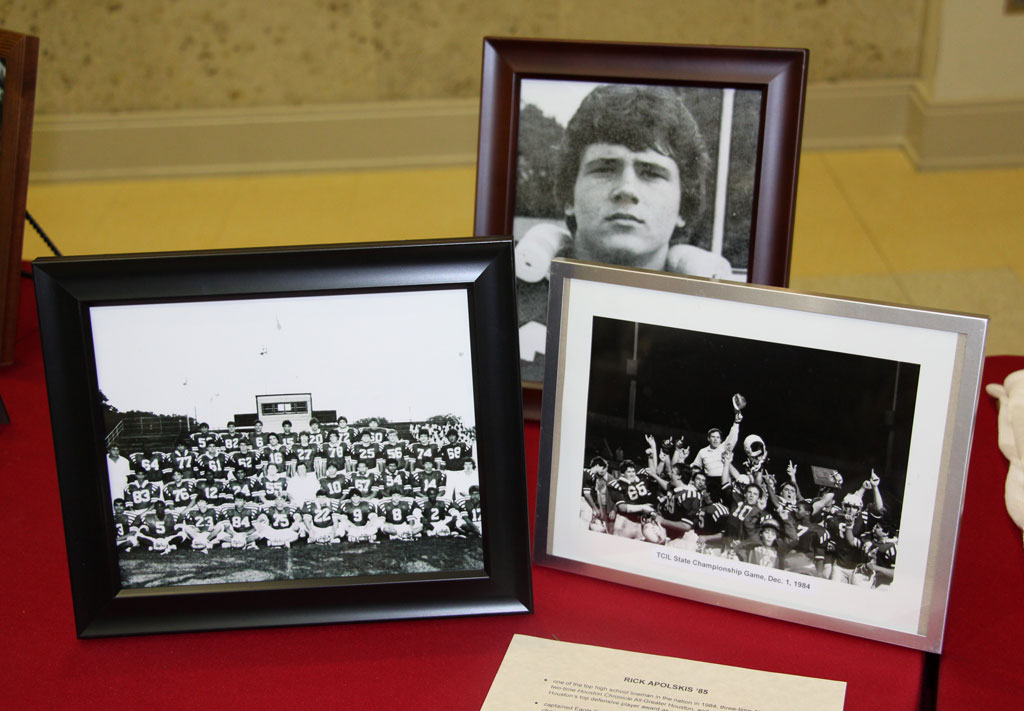 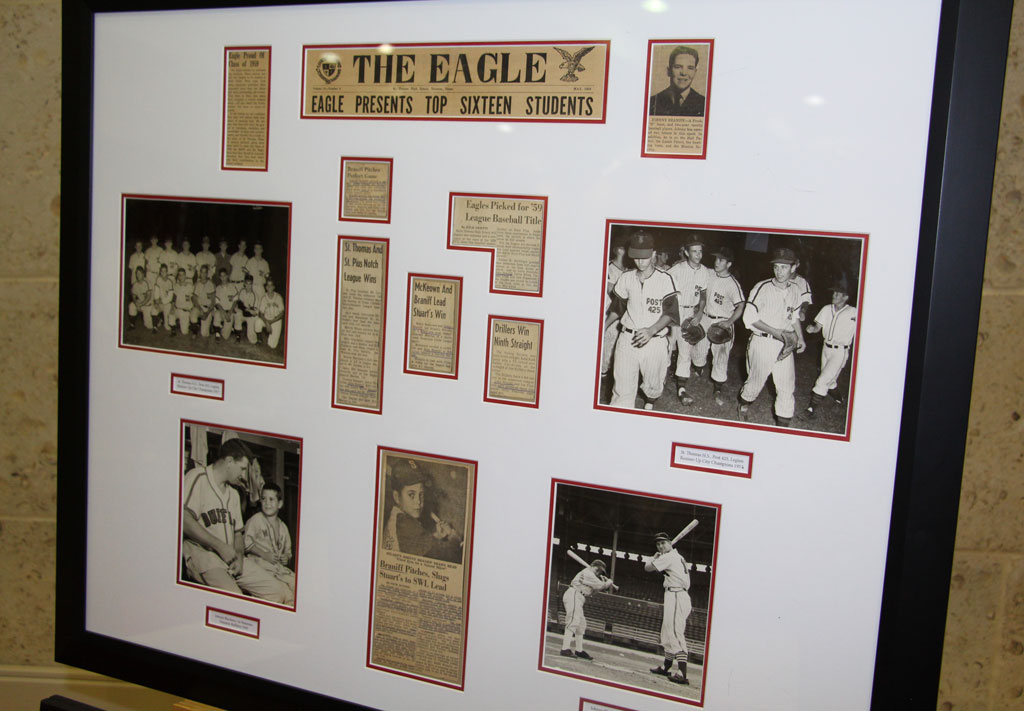