A timeless inquiry that Eagle scholars have pondered for the majority of the school’s historic 118-year mission.

Certainly Fr. Clark Sample ‘01 contemplated life’s potential paths during his days on campus, continuing into his undergraduate years at the University of Texas, fueling a thriving career in the oil and gas industry, all before answering God’s call in 2009 and his stunning about-face entry at age 26 into the priesthood.

Fr. Sample seized a recent return to his alma mater to turn quizmaster, using the annual student community Mass to honor patron St. Thomas Aquinas as a way to connect with the current enrollment occupying a crossroads he encountered at the threshold of the new millennium and then dramatically reevaluated less than a decade ago. 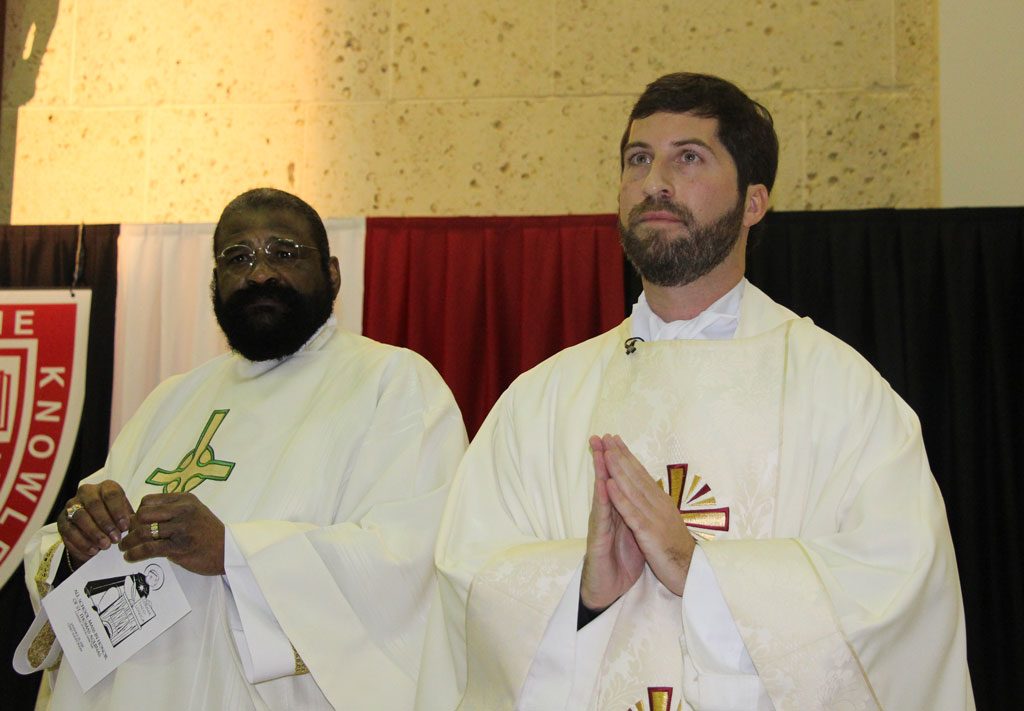 “In no way, I did I ever think, sitting as you are here today, that I would ever be preaching to you as a Catholic priest,” Fr. Sample said in a concise yet compelling homily.

Fr. Sample then paired his own example of discernment and call to the priesthood with the legacy of one of the most impactful Scriptural theologians and philosophers of the thirteenth century

Thomas Aquinas was a Dominican priest who emerged as an authority of the Roman Catholic Church, a prolific writer whose influence on Catholic intellectual life remains immeasurable.

Fr. Sample explained how Thomas Aquinas abandoned his family’s expectations for him, ultimately driven by “an incredibly simple and deeply profound principle … true for him then and just true for (us) today. He saw that every single person seeks happiness. The problem, then and now, is that not everyone understands that true happiness only comes from God. Every single person on the planet defines his or her life by what they see as the ultimate good. Often that definition is money … sex … fame … popularity. At a young age, Thomas knew that the only thing that made him truly happy was his relationship with Jesus Christ.

“The same applies to all of us. The ultimate happiness can only come from God. To discover our unknown journeys, the answer at the most fundamental level includes placing Jesus Christ first in our lives. Everything else with play out.”

Seventeen-year-old Vincent Rizzotto ‘49 couldn’t begin to craft a reply for the resident St. Thomas Basilian, who in turn made a simple request that proved equally life-altering and affirming.

Rizzotto was instructed to gather an index card and write … God, what you want from me today?

Rizzotto attached the 8×10 to his home bathroom mirror, consulted the text each and every day when brushing his teeth and washing his face.

Following his graduation from St. Thomas, clarity led Rizzotto to enter St. Mary Seminary. He was ordained a diocesan priest in 1956, raised to the rank of Monsignor in 1978, served as pastor of St. Cecilia Church for two decades, then assumed multiple Archdiocesan roles including Vicar General, Vicar for African American Catholics and Secretariat Director for Chaplaincy Services and Clergy Formation.

In 2001 Bishop Rizzotto was appointed Auxiliary Bishop of Galveston-Houston and Titular Bishop of Lamasba by Pope John Paul I. He retired in 2006 following a half-century of esteemed priestly service. 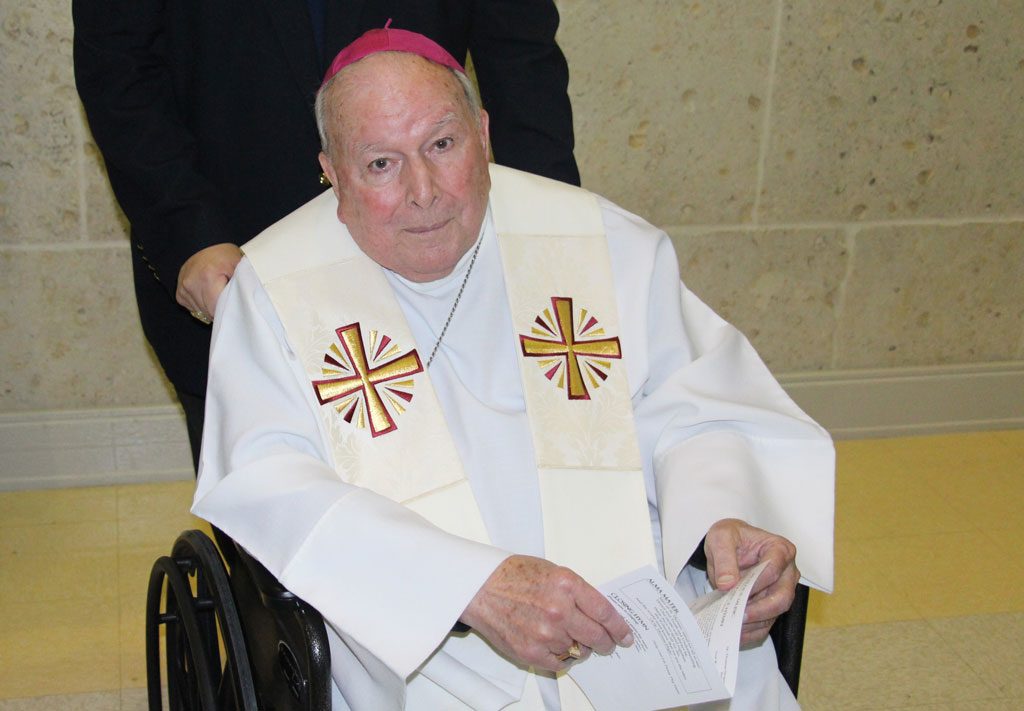 Frs. Rizotto and Sample shared the same Cemo Auditorium altar in late January, the oldest and youngest men from St. Thomas dedicating their lives to the priesthood.

Since his ordination in 2016 at the Co-Cathedral of the Sacred Heart, Fr. Sample has assumed the associate pastor position at St. John Vianney, a flourishing Catholic community in west Houston which draws 10,000 parishioners each week for Sunday Mass.

“Every day is different, a surprise,” Fr. Sample said. “We’re in the people business, so the challenges are helping a wide variety of ages and backgrounds navigate their pilgrimages.”

Fr. Sample’s intense and thorough study at Gregorian University in Rome may have properly prepared him for his lifetime vocational commitment which is not necessarily identical to being prepared for the immediate priestly challenges.

“It’s no different than competing for a team,” Fr. Sample said. “You need the game day reps. And like an athlete you want to limit your mistakes as much as possible while learning and maturing every day.”

The personal probe from generation to the next often reveals that the path to God’s perfect plan is rarely in a straight line. 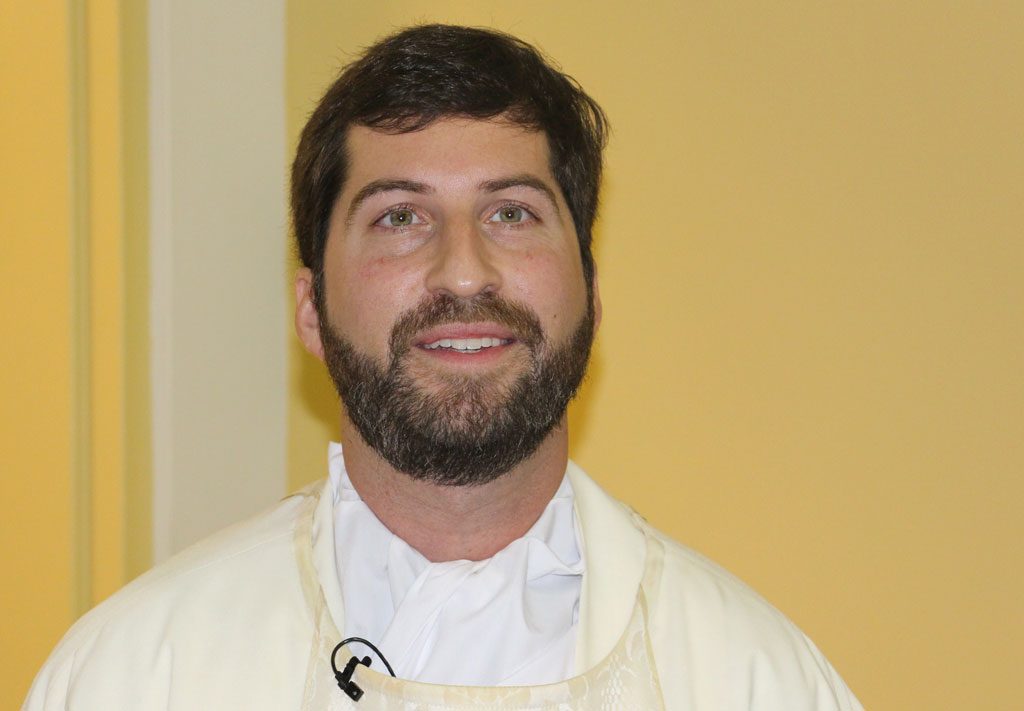 Fr. Sample grasped the unfailing love of God and sought to offer his life sacrificing for Him all while the Catholic Church has experienced a crisis in vocations to the priesthood.

Bishops have been forced to close down parishes where there are simply not enough priests to meet the demands. But a number of dioceses in the United States have found that where there is faithfulness to Catholic doctrine, vocations to the priesthood flourish.

“For too many years in the Church we lacked a culture of vocation,” Fr. Sample said. “The numbers had been strong but during the 1960s and 70s, the prevailing attitudes became that someone else would will the voids. There was a resurgence (under St. Pope John Paul II and Benedict XVI), then a slight downturn. We have to continue re-establishing the culture and promote that the priesthood is a viable life option that brings happiness if God is calling you.”