In the first road encounter of the pandemic era, 2020 Elite 11 quarterback Maddox Kopp ‘21 (verbal Houston) shook a shaky start to finish with a school-record 533 passing yards and eight touchdown passes as Eagle Football buried San Antonio Christian with 37 unanswered points in the first half and showed plenty in a 65-14 blowout.

Receivers Cameron Bonner ‘21 (more than two dozen Power 5 offers) and Drake Martinez ’21 (verbal Colorado St.) became the first pair of Eagle wide receivers with 150 yards each in a game in St. Thomas history.  The overwhelming verdict gives the Eagles their 11th straight district victory since 2018 and keeps them undefeated in the 2020 race (3-2, 3-0).

On the final snap of a lethargic opening period, Kopp tag-teamed with explosive Bonner (5-151 yards) for a 78-yard lightning bolt touchdown.  The strike ignited St. Thomas from its funk.  An avalanche of points followed to secure the outcome before halftime.

Kopp closed out the boat racing quarter finding Bonner separating on a fade to the right corner to end the blitzkrieg and take a 44-14 bulge into the break.

1. Throughout the second quarter the Eagles were as comfortable as chicken fried steak on biscuits with cream gravy.  Fries on the side. They needed only a lucky 13 plays to rack the 35-point explosion.

2. A sack set the Eagles’ sixth series back to their own 10-yard line.  Martinez then took a short throw from Kopp and flashed strength and speed to burn the Lions.  He made a physical catch across the middle, quickly turned into open space to split the secondary, and outraced defenders for a reservation for six.  The first of his two touchdown grabs bumped the count to 23-7.

4. Defensive back Cameron McCurry ‘21 (six tackles) stormed in to block a punt and immediately swing momentum early in that pivotal second quarter.  His recovery set the Eagles at Christian’s 20-yard line.  Eleven seconds later Kopp connected with Price for 16-7.

5. Kopp’s timely rushing consistently undersells his effectiveness on the ground.  In a match with the Christian Lions that more resembled the Lions and the Christians, his 62-yard jaunt to the left sideline to open the second half preceded a third touchdown toss to Price.

Price enjoyed his third multi-touchdown game of the season and owns seven TDs so far in his breakthrough Eagle debut.

The 65 points was the Eagles’ largest output since a 63-point spree against Kinkaid Week 3 in 2018.

Eagle Football began the night ranked the No. 2 private in the Chronicle media poll and No. 4 by VYPE Houston.

The Eagles took few punches while playing the bully, landing blow after blow against an over matched district opponent.  St. Thomas delivered a knockout in a performance that registered enough high notes for head coach Rich McGuire to feel confident about where his team is headed.

Christian was tapped out by the midway point after being harassed, flipped, and flattened.

The Eagles took another step forward offensively under quarterback coach and first-year play caller Matt Hudson.  He orchestrated a diverse game and Kopp trusted that he could do whatever he wished, letting fly deep to Bonner and underneath to whomever whenever.  Hudson also crafted creative ways to get the ball to Fontenot, who rocked two breakaway romps on short receptions.  His biggest gains of the season set the stage for scoring throws to Bonner and Joe Rick Madden ‘22 after racking 152 all-purpose in Week 3 against San Antonio Central Catholic.

Eagle Football again demonstrated a paradoxical defense – ultra aggressive nastiness without taking risks.  Credit the line for winning the point of attack and negating the Lions’ ability to establish tempo.

The Eagles will return home October 23 looking for a decided dose of deja vu for a third straight victory over San Antonio Antonian College Prep.

In 2019, Kopp riddled the Apaches for 314 yards and two touchdowns in a first half detonation where St. Thomas plastered points on its first four series. The Eagles coasted to a convincing 41-27 dismantling in a game not nearly as close as the final indicated.

A parade of Eagle scholar-athletes received significant recognition leading into the 2020 campaign. Kopp was selected as the VYPE private school preseason Offensive Player of the Year while Bonner, Martinez, offensive lineman Ryan Hanks, linebacker Vince Lee, and defensive back Aidan O’Hare were named All-VYPE. Bonner, Kopp, Lee, Martinez, O’Hare, and Fontenot were named by the Touchdown Club of Houston among its preseason private school honorees. 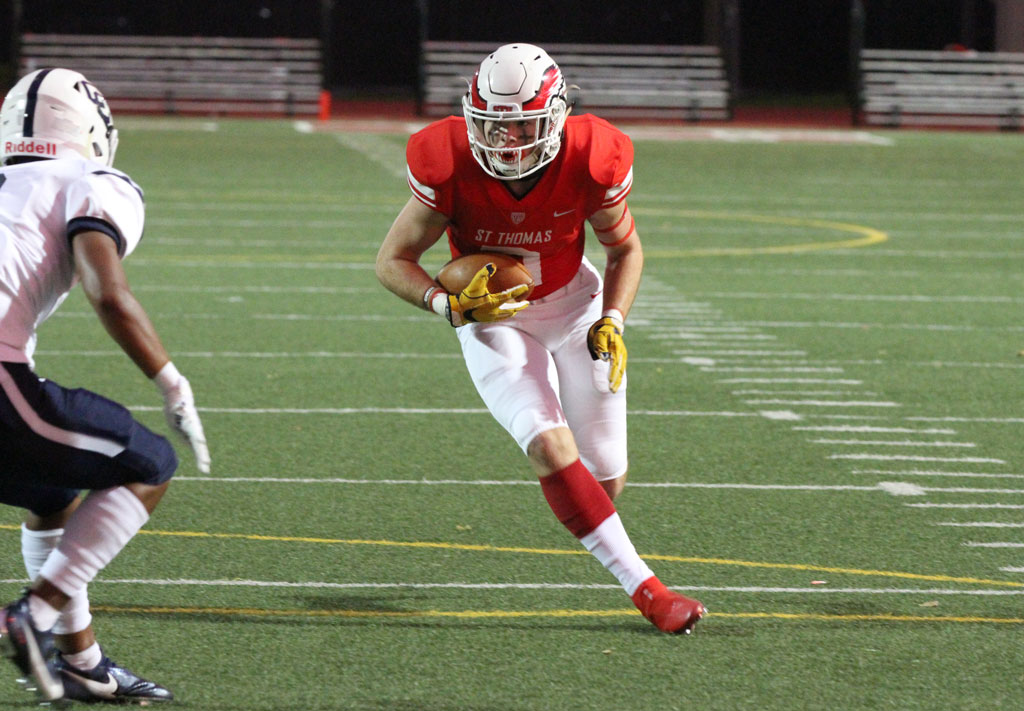