WHAT YOU NEED TO KNOW
Sizzling slinger Jake Wright ‘22 scorched St. John XXIII for 326 yards and five touchdowns while Marquis Kiatta ‘24 returned a second-quarter kickoff the length of the field for a lightning bolt score as the three-time undefeated district champions opened defense with a mugging at Hotze Field inside Granger Stadium. 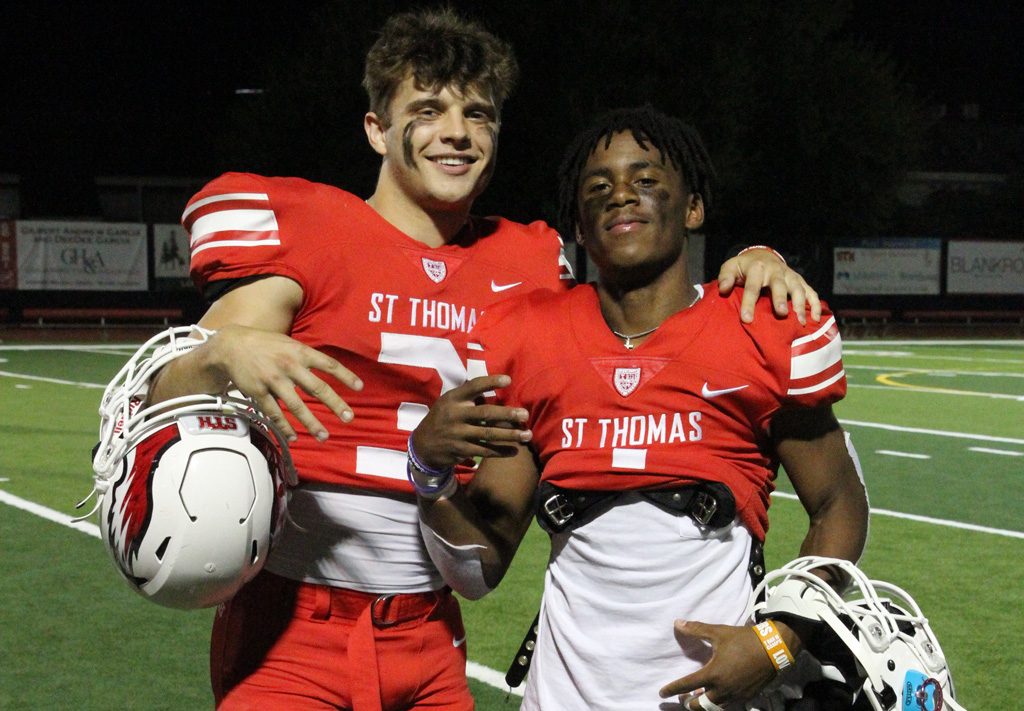 SMELLS LIKE TEEN SPIRIT
The Eagles outmuscled, out-schemed, and easily out-performed the visitors for a 15th consecutive district win and sixth straight home victory. The extended streaks raise their record to 4-1, matching the mark in the 2015 campaign that ended the regular season 9-1 and finished with a second consecutive TAPPS state semifinal appearance. 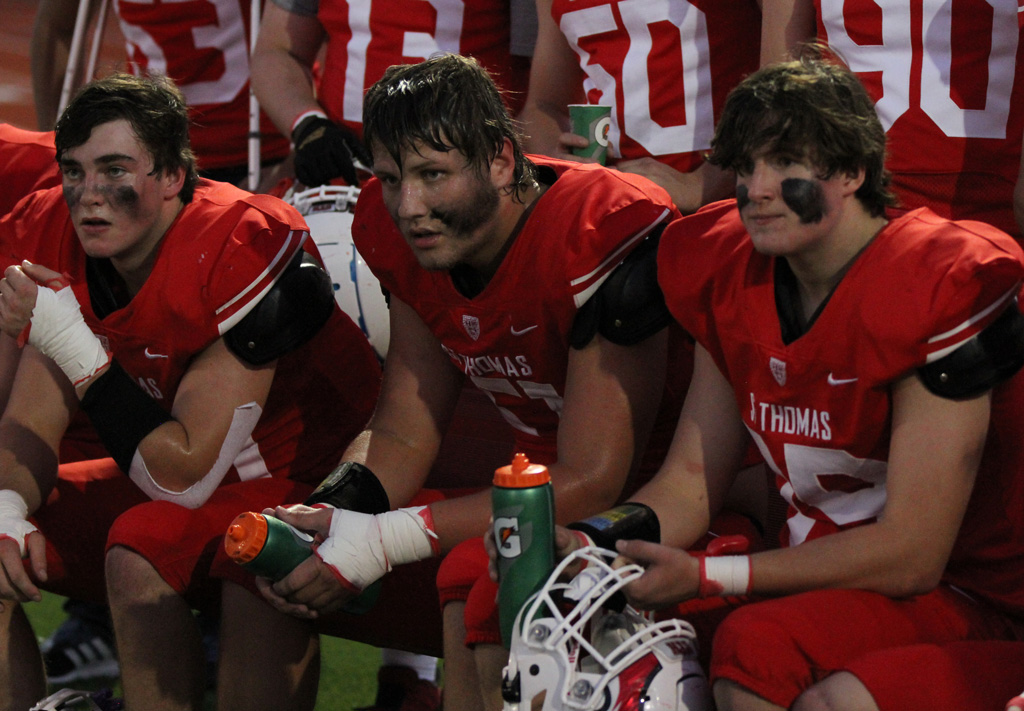 TURNING POINT
Eagle Football was braced to administer blistering back-to-back beatdowns less from the first 30 seconds of the thrashing. Explosive romps and savage stomps and a rocket man electric return the length of the field produced a punishing Tyson-Spinks quicksilver knockout. 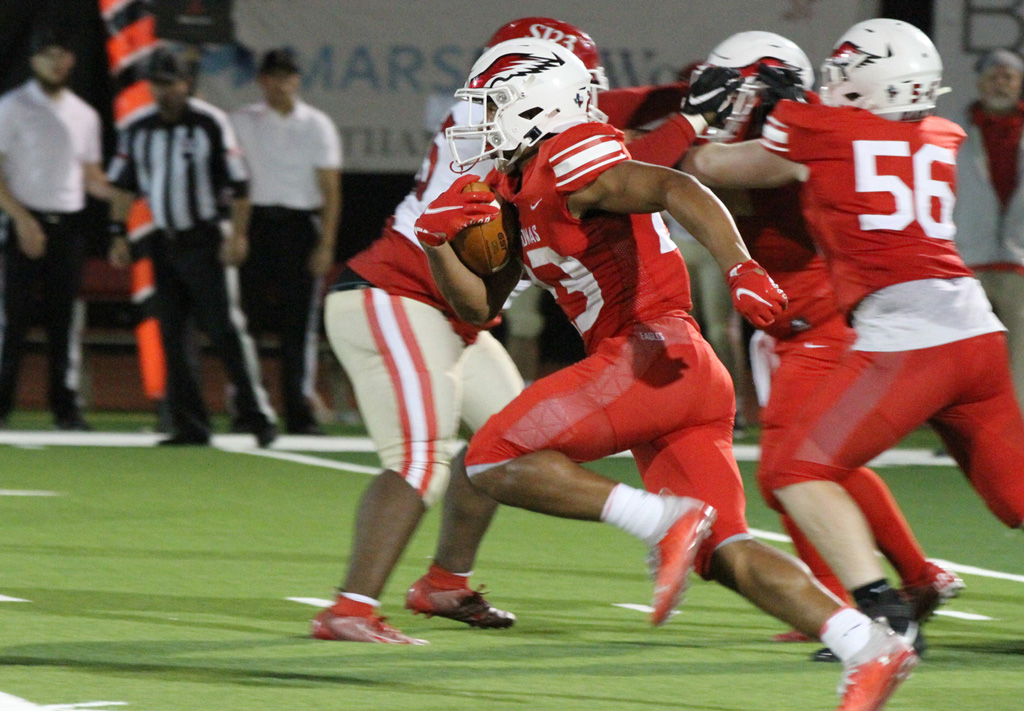 FRIDAY NIGHT FIVE
1. Wright and dynamic receiver Cameron Price ‘22 continue to dramatically enhance the future value of their names, images, and likenesses. On the second snap of the game, the two tag-teamed for their sixth touchdown of the season. The 50-yard strike up the right hash marks hit peerless Price (4-114 receiving yards) in stride and he raced untouched to the end zone to set the tone for a dominant St. Thomas evening. 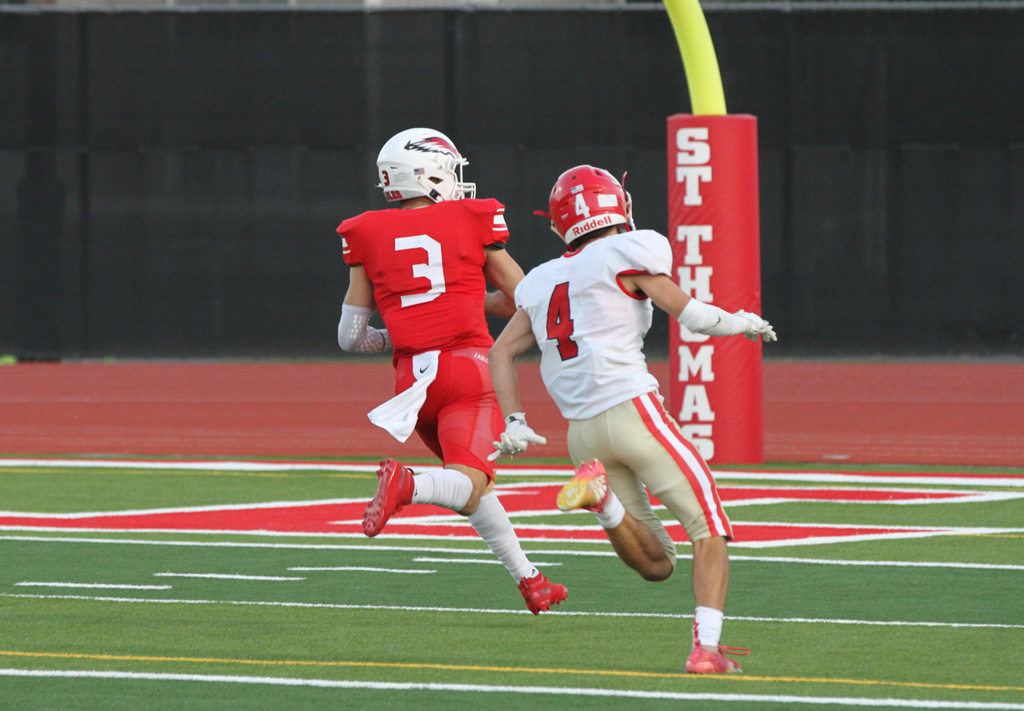 Early in the second period, Wright dumped a screen pass to running back Johann Cardenas ‘24 in the right flat for a 28-yard catch-and-bulldoze run to pump the spread to 21-3.

3. But the magic moment in the looming blowout was supplied by Kiatta, who bobbled the kickoff at the goal line following the SJXXIII field goal. He quickly recovered, darted up the middle of the field, suddenly broke from the pack to the right sideline, and danced through a late diving arm tackle attempt to finish a 100-yard return for the first score of his Eagle career. 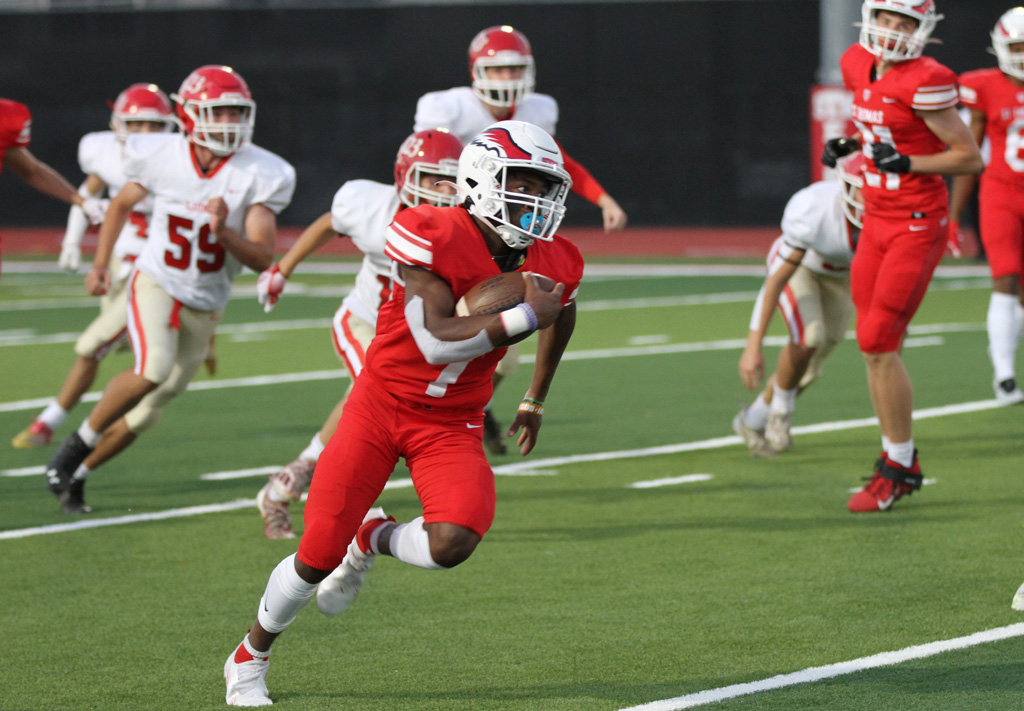 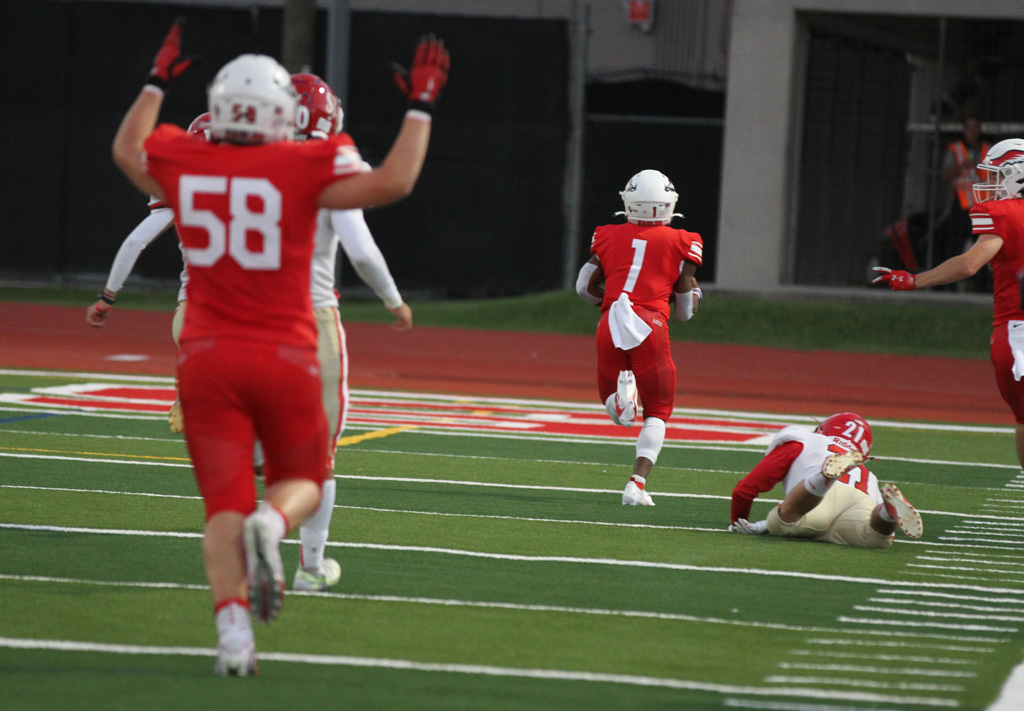 4. In the final minute of the first half, St. Thomas cashed in a 64-yard series despite a holding penalty plus a personal foul. Wright dialed in Joe Rick Madden ‘23 on third down for the 34-yard score and a commanding 28-3 advantage.

5. In the second half, Wright continued to thread balls through SJXXIII and receivers sashayed away from overmatched defenders. Cardenas (140 all-purpose yards) finished a second two-play touchdown series, grinding the right sideline for 25 yards after a dump pass for his sixth touchdown of the season and a 35-3 count. Wight closed out the carnage with a third-and-goal payoff to receiver Luke Edgecomb ‘24 for the final margin. 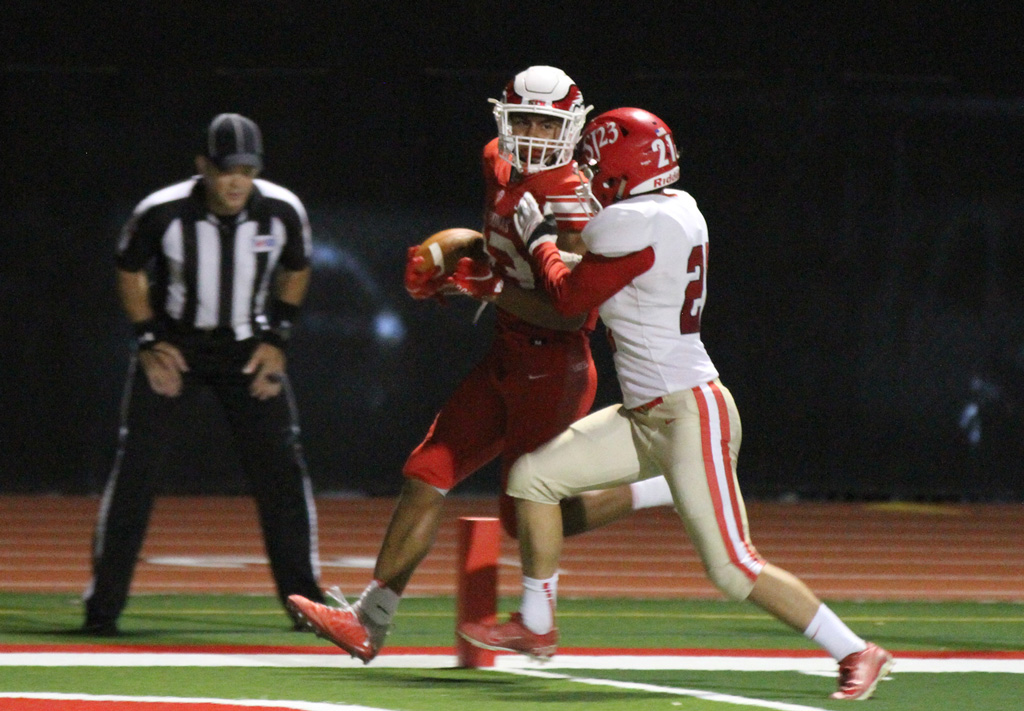 VIVA LA BAM
The Eagle defense was a reality that arrived like a fence post swung by Buford Pusser. Linebacker Jack Ward ‘23 collected his third interception in five games to set up Cardenas’ second TD jolt. The master of mayhem joined Tegan Spencer ‘22, Tommy Donofrio ‘24, and Zach Rocha ‘23 who maintained their roaming sledgehammer style as if their collective self-worth were at stake. Bad man Charlie Batterson ‘22 twice collapsed the interior pocket for negative plays. When the outcome was being decided, SJXXIII was slam-danced into submission, forced into five punts in six possessions along with a meaningless series that killed the clock to end the first half. 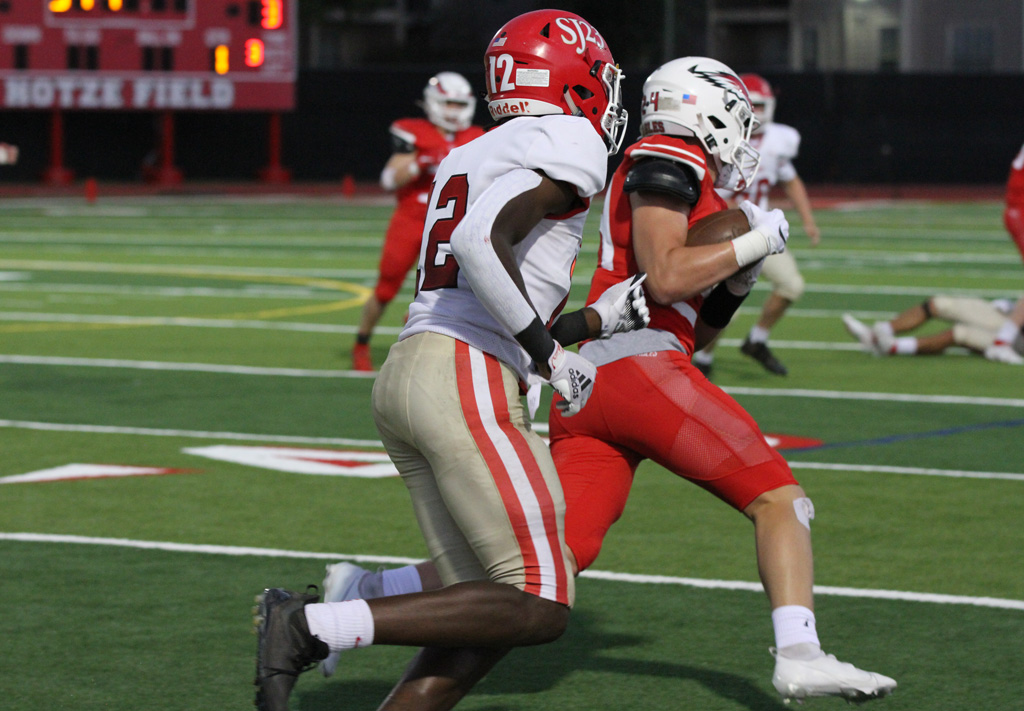 ROCKIN’ THE FILLMORE
In five career starts, Wright has now tossed for 1,635 yards with 17 touchdowns and rushed for another four scores while allowing but one single, solitary interception. He’s completing 72% of his throws with a rating of 149.1. 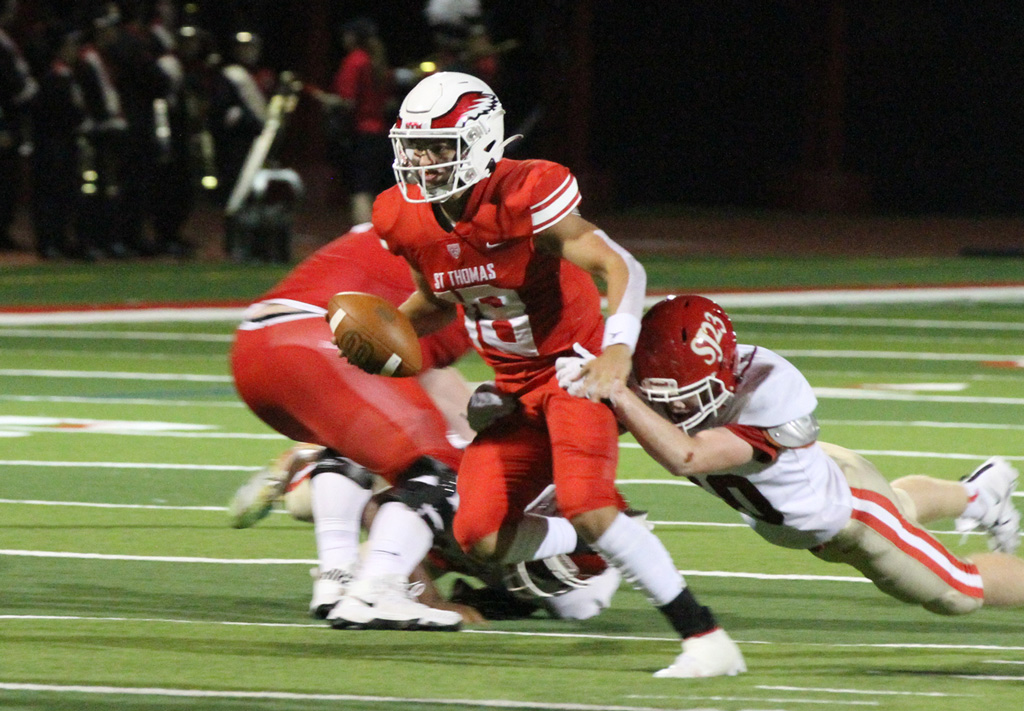 STATE OF PLAY
There is often a difference between desire and achievement. Yet, St. Thomas has accomplished the rare feat of marrying the two during its annual obliteration of TAPPS Division I District 2. The latest demolition was so comprehensive in its destruction that the three opening weeks of tension were practically washed away. 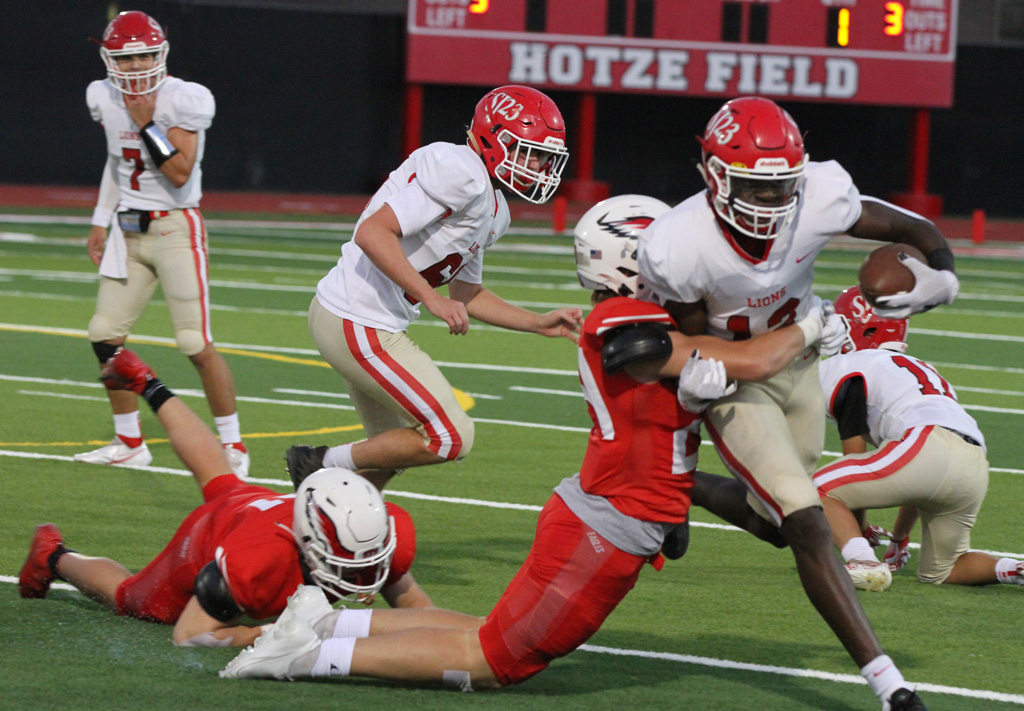 At the season’s halfway mark, McGuire has figured out his personnel in the offensive line and secondary, which gives the Eagles a solid foothold on both sides of the ball. St. Thomas has tuned-up its tackling, it’s big-play prevention making the Eagles feel like they’re headed in the right direction.

The offense has been replaced without a blink. Wright and Price (32-643 receiving yards) are the catalysts and among the most productive players in Texas high school football at their respective positions.

Eagle Football has benefitted from a favorable runway into this season. Now the demand is to percolate with passion with a showdown against a viable district threat averaging more than 37 points per game. 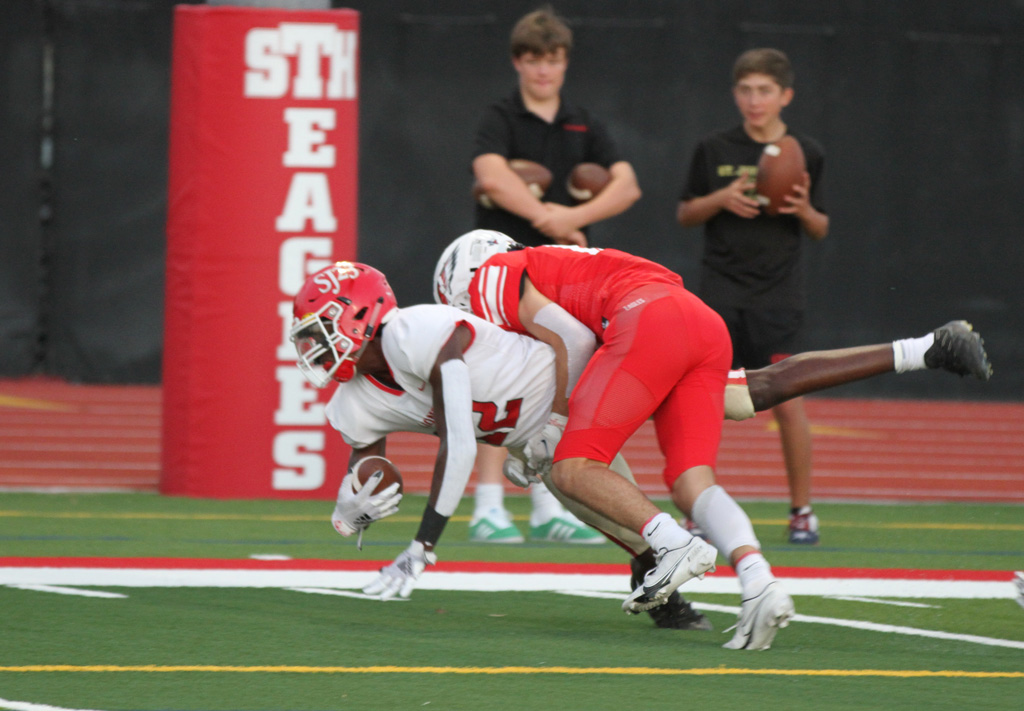 D’Onofrio’s father Mark was a standout linebacker and the 1992 team captain at Penn St., then selected in the second round of the NFL Draft by the Green Bay Packers. His acclaimed college coaching career included defensive coordinator positions at Temple, Miami (FL), and Houston.

¡UNO!, ¡DOS!, ¡TRÉ!
Eagle Football started the night ranked No.3 in the Houston Chronicle media poll and fifth by VYPE Houston, and has outpaced consecutive opponents by a combined 84-10.

The resounding result resumed a brief mismatched series that flashed a 49-0 Red & White rout in 2014 followed by the 40-point wipeout the next season. The Eagles collected a forfeit victory from SJXXIII in 2020 when the game was canceled for non-pandemic reasons.

The summer of 2021 celebrated the next step toward the latest phase in an extended plan to upgrade the expanded facilities for Eagle Athletics. Hellas Turf with the patented Helix Technology was installed at Granger Stadium. The system provides optimal shock absorption and excellent control in all weather conditions. Surface temperatures on a synthetic turf field with the Hellas organic infill will be up to 40 degrees cooler than a regular synthetic turf field. 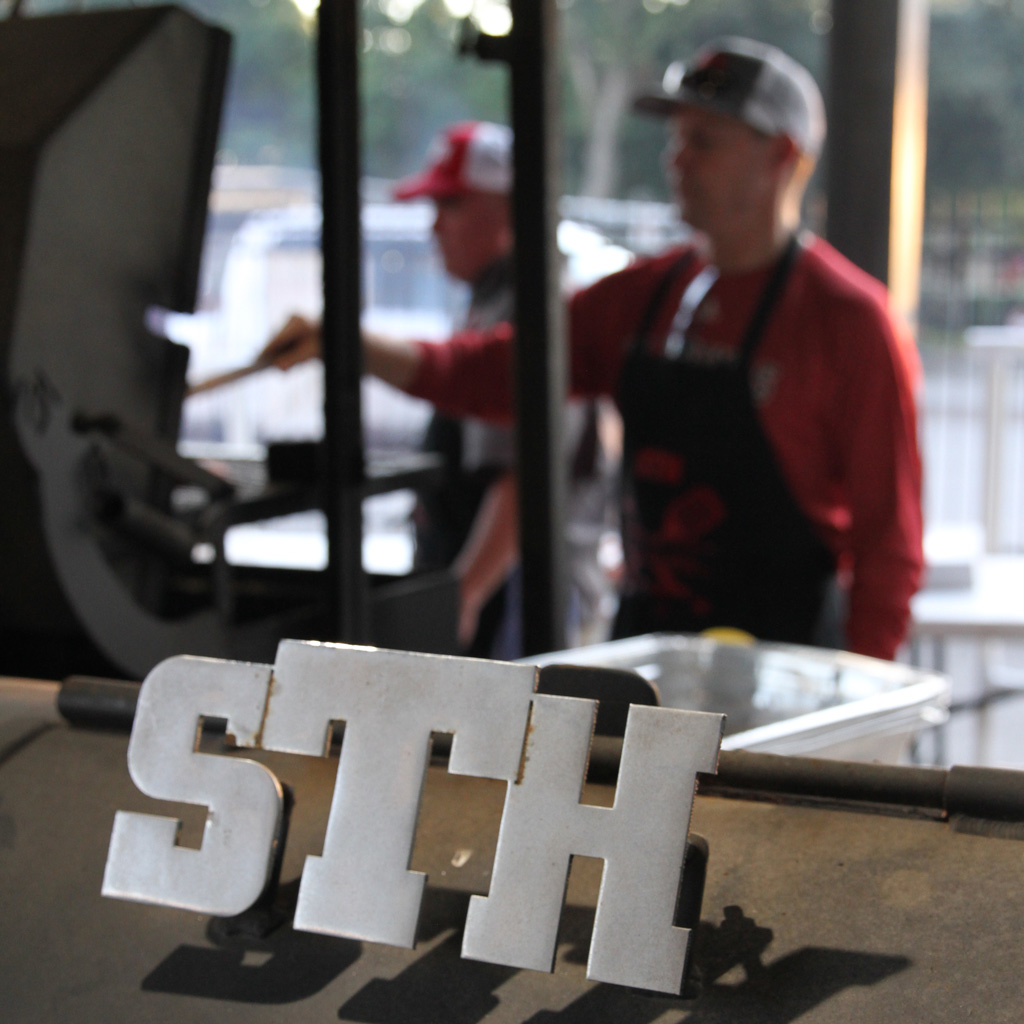 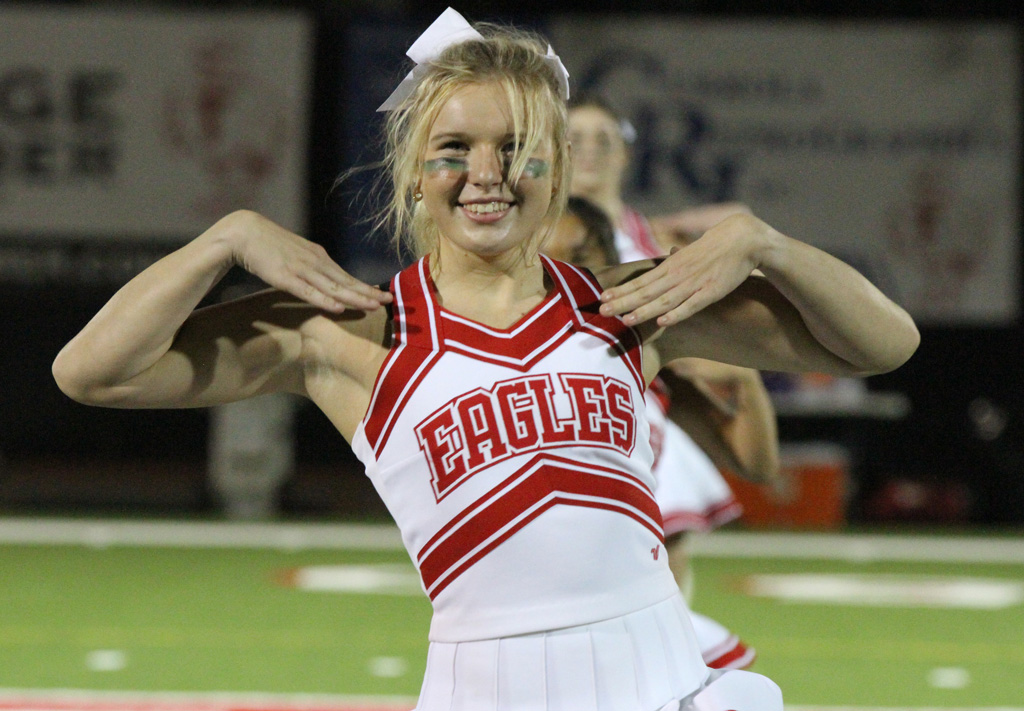 UPCOMING
Eagle Football next travels to San Antonio Central Catholic (4-1, 1-0) on October 1 for the only St. Thomas road stop in a four-week stretch. The series has pivoted from non-district to district competition since 2017 with Eagle Football owning four consecutive wins.

The most recent encounter saw the Eagles hosting its third consecutive socially distanced football game of 2020. Quarterback Maddox Kopp ‘21 (Houston) delivered three touchdown passes and a slam dance defense shut down the Buttons in a 31-14 verdict for the Eagles’ first on-the-field victory of the season. 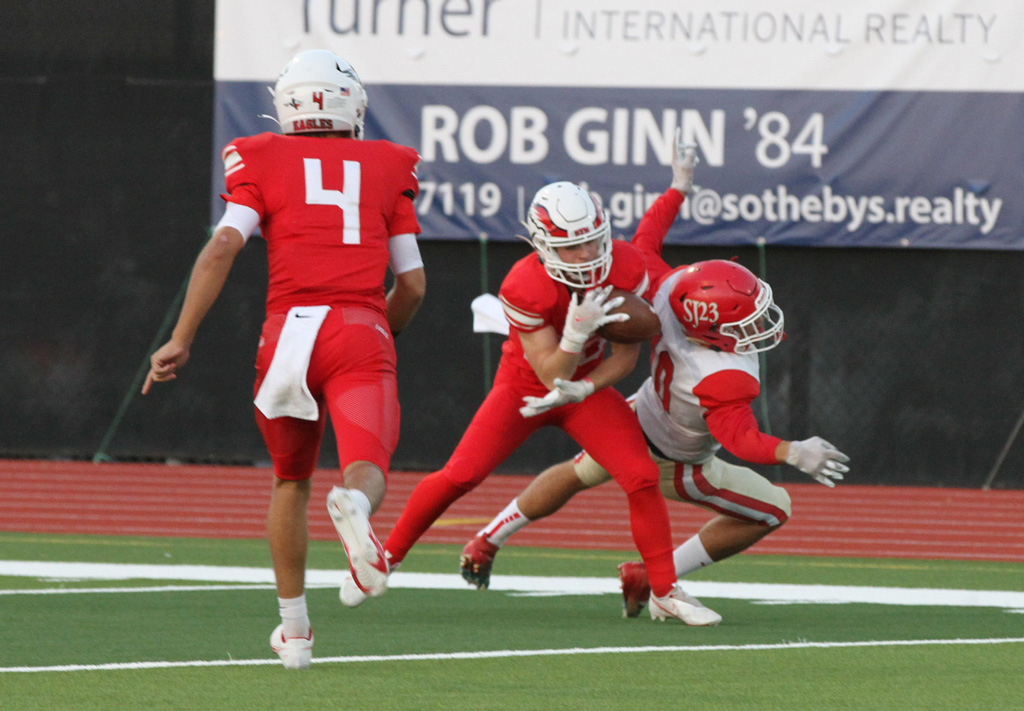 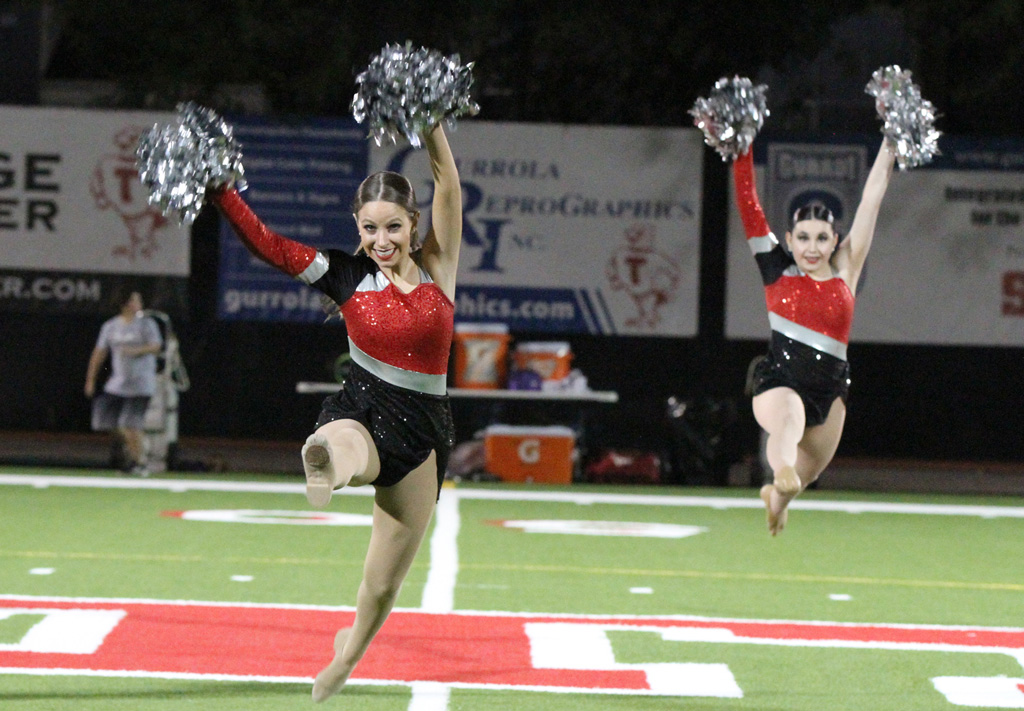 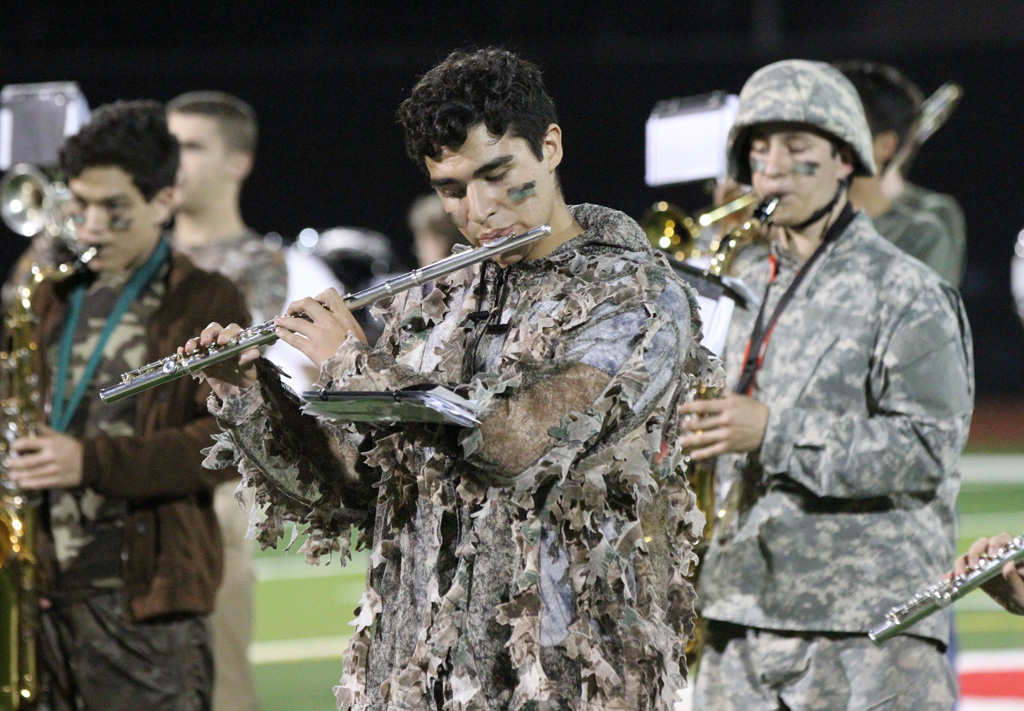 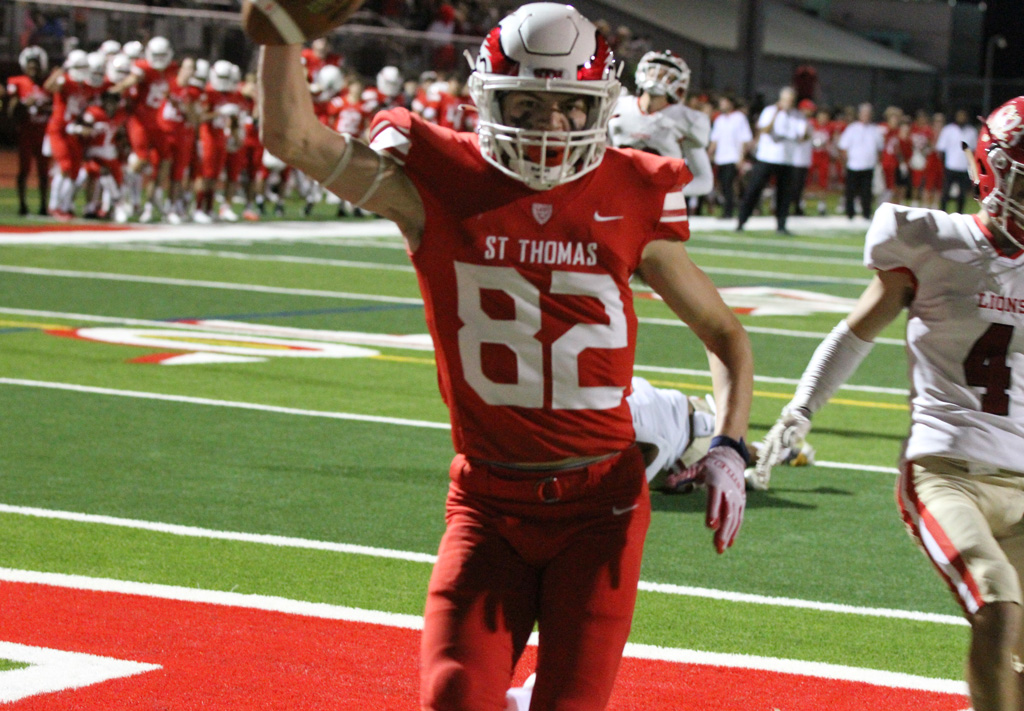