A rare few check off each box. One way or another, though, our stakeholders make an impact. And this is the genesis of the series we’re launching in February.

This the first in a series.

Athletics
Craig Biggio
The stunning news moved swiftly in May 2008 even minus a collective social media surge. Mere months into his big league retirement, the eternal Astros icon was assuming control of Eagle Baseball from Ken Schulte following back to back state titles.  What better way to connect and recoup some of the up close and personal dad time with Conor ‘11 and Cavan ‘13 that had been sacrificed to carve that signature path which eventually led to him to the National Baseball Hall of Fame. 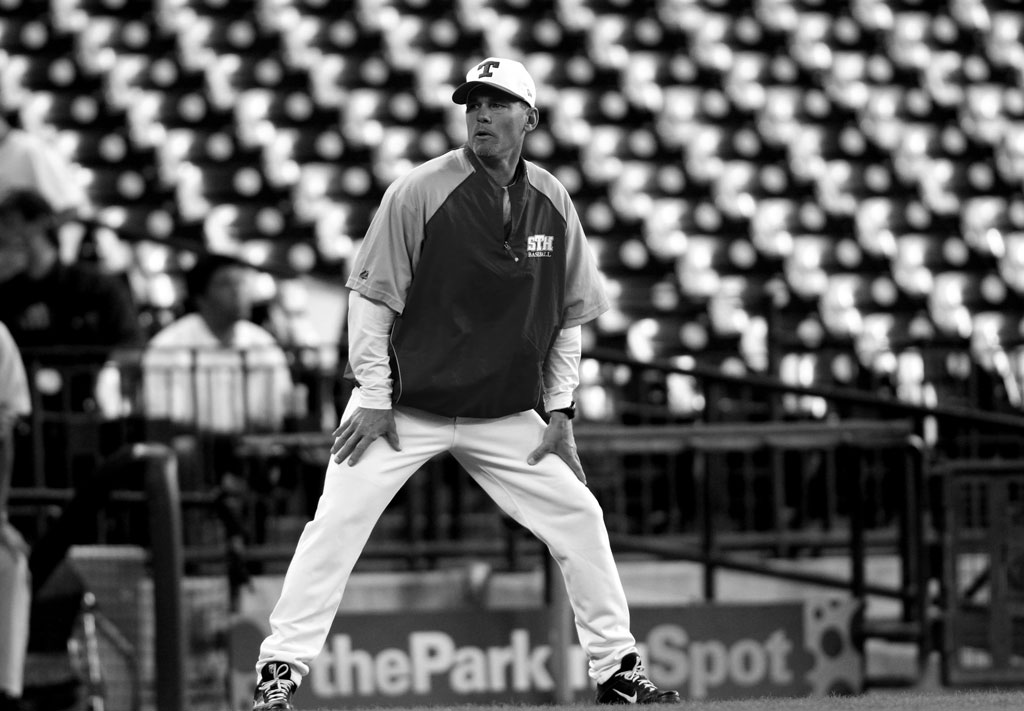 The official hardware was consecutive TAPPS state titles in 2010-11 to launch four straight state tournament appearances before stepping down in 2013.  Undocumented is the continued deep embrace and appreciation both parties cherish for each other and the experience.  And when the first home-grown Astro received the call to the hallowed Hall, a significant St. Thomas contingent was in full force to relish his salute in Cooperstown, New York. 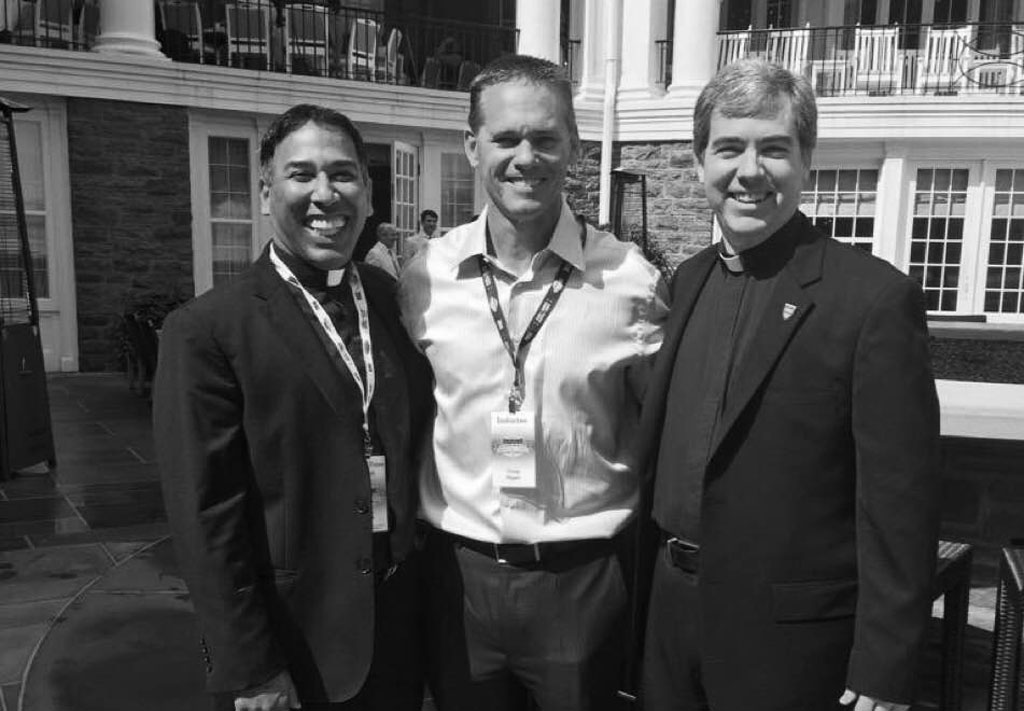 Cavan Biggio ‘13
Biggio The Younger emerged from his father’s formidable shadow for the grandest of homecomings. May 2019 at Minute Maid Park, three weeks to the day of his big league call-up to the Toronto Blue Jays. And on Father’s Day, no less.

The hard-charging hardballing Biggios – Cavan and Conor ‘11, Craig, Patty and Quinn – bonded again, swirling in a diamond daze far removed from when the two brothers tag-teamed at Fr. Wilson Field for Eagle state championships nearly a decade before with their forever Astros icon dad as the bench boss. 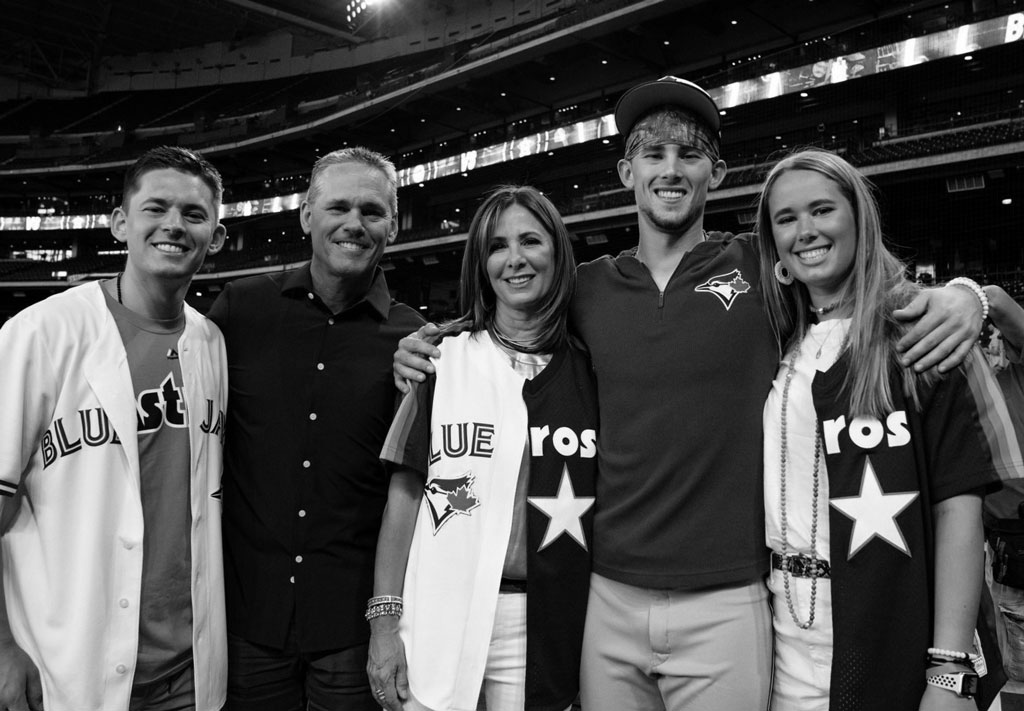 Michael Keating ‘16
Nearly 10,000 strong were raising the high tech roof of the Texans’ state of the art NRG Stadium. In the final maniac moments, the kid quarterback had one final masterful Mahomes-like act.

Retreating in the pocket, stepping aside to avoid pressure, reversing 360 degrees while maintaining his balance and eyes to the end zone, then lasering the game deciding strike and sealing the outcome. A final dagger in a six touchdown extravaganza to defeat Strake Jesuit in a wild 42-35 scoring fest.

The raucous win was the Eagles’ fourth consecutive victory in the series, with three coming in the game’s final six seconds, the previous two on scoring throws from Keating who would go on to assault the St. Thomas offensive record book and sling the Eagles to a second consecutive TAPPS state Final Four. 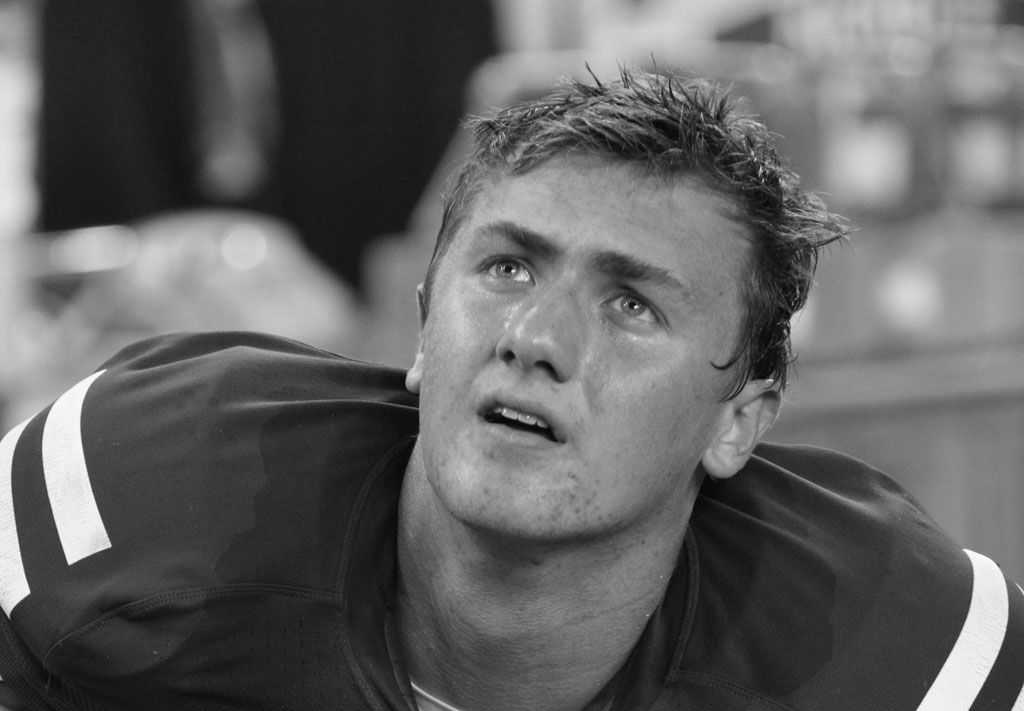 Ben Condara ‘14
With two outs and two strikes and the margin to win the state championship two bases away, Big Ben delivered the most important deuce of the Eagles 2014 season, the clinching run to edge Tomball Concordia Lutheran 2-1 for the school’s third TAPPS state title in five years and 23rd championship in the program’s rich history.

More dramatically Condara was consistently the face of tenacity and perseverance, calm and composure, the driving force for an outfit that emerged triumphant in the wake of star-crossed reality. 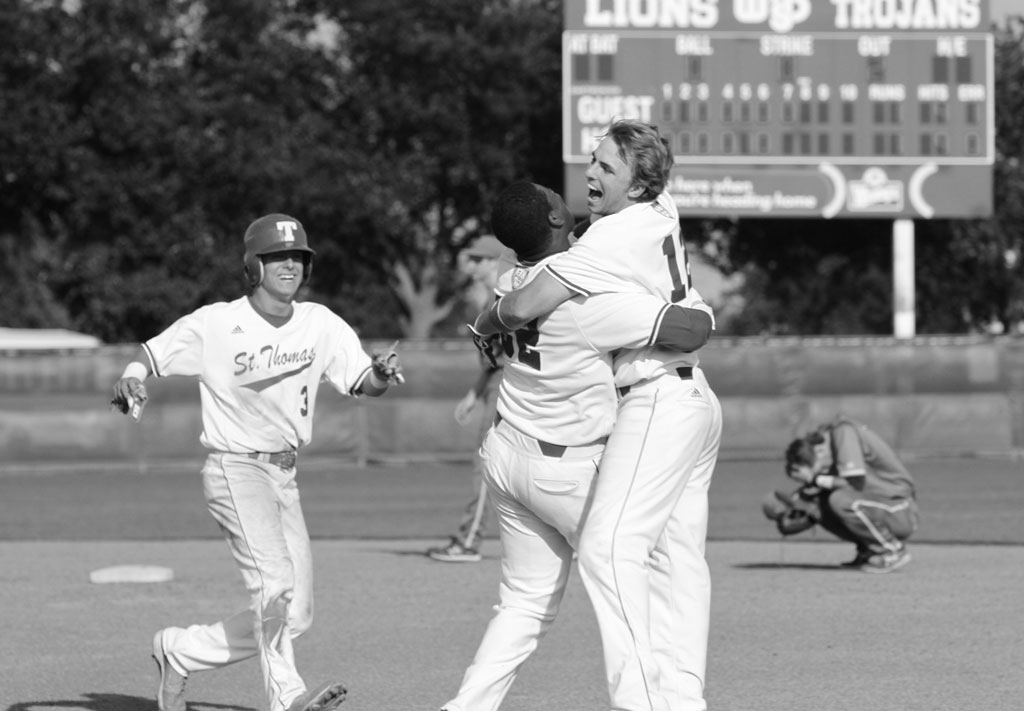 Mike Netzel
The greatest decade in the history of Eagle Athletics was simply an extension of the athletic director’s grand designs set in motion beginning in May 2008.  He brought a deep reservoir of invaluable experience, from winning private school state baseball championships to conducting elite performance tutorials to excelling as a former National Sales Director at Siemens Medical Solutions. 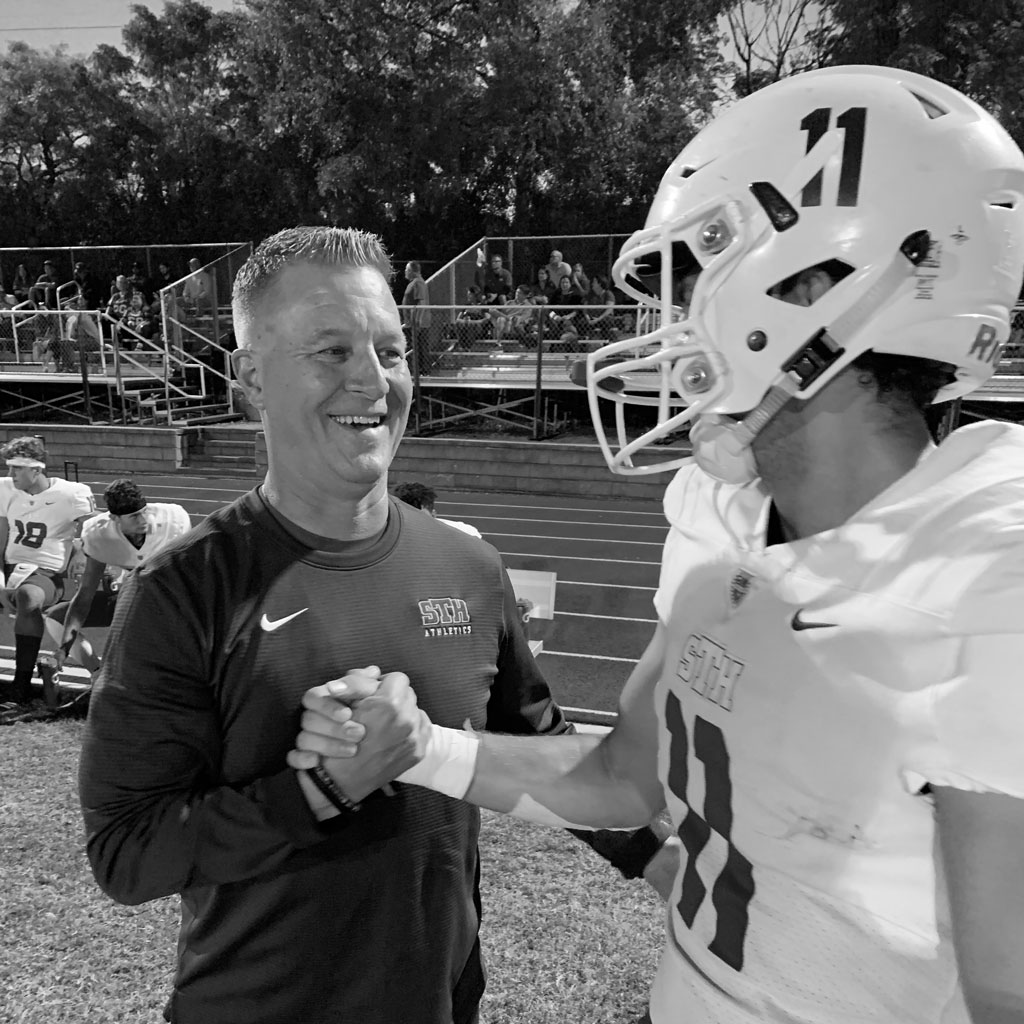 Netzel then delivered a commitment to excellence in every facet of the scholar-athlete experience, fostering an environment that allows for success on all fronts while maintaining the St. Thomas standard for prestige and community service.

The state’s landscape of college preparatory athletics decidedly tilted the Eagle way throughout the 2010s. St. Thomas earned seven straight All-Sports Awards after leading the state’s highest classification in total points earned through playoff participation and cumulative on-field performance across multiple sports. The achievement is an embodiment of dedication and an enduring commitment to superiority. Eagle Athletics promptly reclaimed the crown in 2018 and repeated in 2019 during a phenomenal year that spiked with a pair of state championships, three state runner-up results, two Final Four teams, and two regional finalists.

Since 2012, 131 scholar athletes have extended their careers at the university and collegiate level. In June 2019, pitcher Josh Wolf ‘19 was selected in the second round of the MLB Draft and later signed with the New York Mets, the highest drafted player in the rich history of Eagle Baseball. 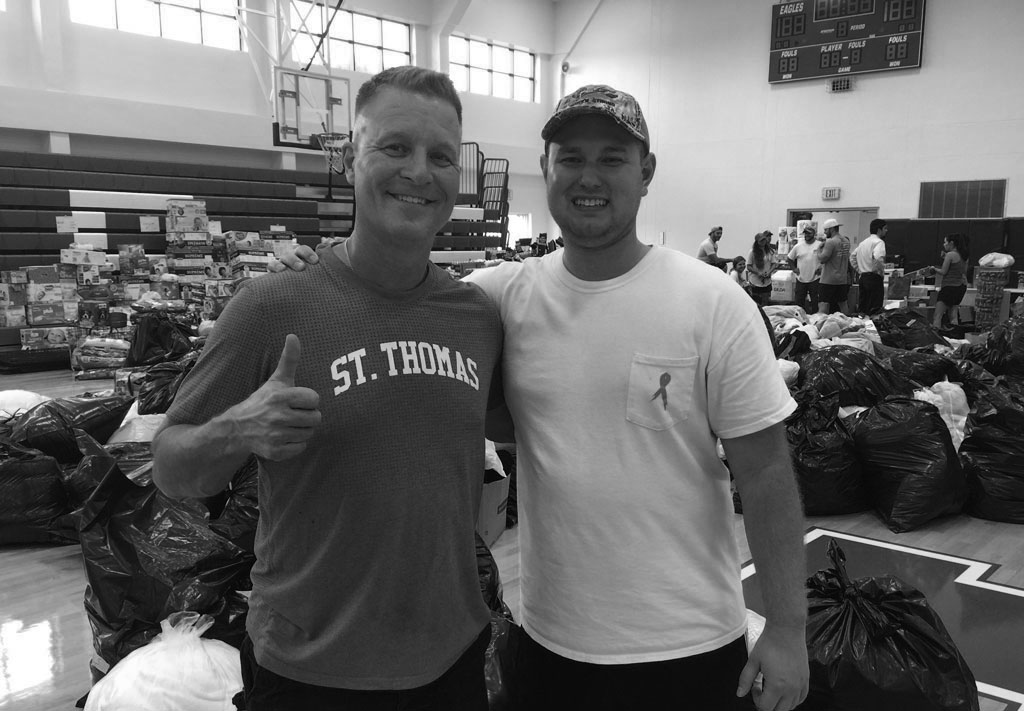 Entwined in the championships, acclaim, and title contending are consistent examples, large and small, that personify the ethos of Teach Me Goodness, Discipline, and Knowledge. Such as pairing with St. Pius X and television partner The KUBE 57 to benefit the Star of Hope ministry or immediately teaming with former Eagle state baseball champion Tim Redden ‘09 to organize a quicksilver relief effort that generated significant results for storm-ravaged Rockport within days of Hurricane Harvey slamming into the Gulf coast.

Eagle Athletics is a destination where competitive dreams come true and overall distinction is the expectation, not the exception, part of a values-focused culture led by Netzel with the full support of the St. Thomas Board of Directors and the school’s administration.

And the best is yet to come.

CLICK HERE for The Most Impfactful Identities in St. Thomas Academics and Development Since 2010

The 20 in ‘20 showcase continues throughout February.