Running back John Fontenot ‘21 rammed, jammed, bruised, and bolted for 181 all-purpose yards and four touchdowns while a kneecapping Eagle defense turned tenacious during the meaningful moments in a 49-21 pasting of St. Pius X. The commanding Senior Night verdict gave Eagle Football (5-2, 5-0) its third consecutive district title and seventh in nine seasons. Eagle Football continues to dominate the series with three wins in a row and seven since 2012.

After bulldozing for a pair of short range touchdown runs in the first half, Fontenot took a short toss from 2020 Elite 11 quarterback Maddox Kopp ‘21 (verbal Houston) late in the second quarter. He cut back not once, not twice, but thrice against overmatched SPX defenders to reach the right sideline before aggressively accelerating to the pylon for a 31-yard burst. His third touchdown of the half broke the 14-14 tie.

An athletic interception from Peter Corbett ‘21 immediately gave St. Thomas possession near midfield. Three plays later, Kopp connected with receiver Cameron Price ‘22 on the right sideline for a 56-yard jolt to the end zone and a quick flash 28-14 advantage. The roughly 60 second game-changing stretch concluded 28 unanswered points in the period and all but decided the outcome.

1. The Eagles dismissed another lackluster start to play with a sense of urgency and identity. The relentlessly determined Fontenot (19-99 rushing yards) took advantage of spaces wide enough for Chevy Silverado tracks when he wasn’t treating the opposition like dessert debris drifting across the south Texas plains. His ground and pound from nine yards put up the first St. Thomas points to even the count at 7-7. Later, an eight-yard reservation for six finished a 62-yard series that required only five plays and 1:38. He then capped his career night with a quick charge into the middle of SPX second tier, shifting outside, and finally angling to the end zone for 42-14.

2. Kopp (23-38, 347 passing yards) continued his season-long aerial assault with three touchdown strikes. His payoff with Price was their ninth of the season. Kopp also tag-teamed with receiver Alec Schneider ‘21 on the opening series of the second half. The eight-play scoring push upped the Eagle edge to 35-14 and included darts to Schneider for 19 yards, Price (6-142 receiving yards) for 12 yards, 11 yards to dazzling deluxe Cameron Bonner ‘21 (more than two dozen Power 5 offers) and a flair in the flat to Fontenot that gained 10 more.  St. Thomas toyed with the Panthers from there.

3. The first Eagles’ scoring series was jump started by Kopp’s 20-yard delivery to Bonner (4-49 receiving yards).  A 25-yard strike to Price set up the first course in Fontenot’s touchdown buffet.

3. Kopp’s timely rushing consistently undersells his effectiveness on the ground. His 28-yard romp midway through the second period carried to the Panther eight-yard line during the sprint series for 14-7.

4. The next scoring possession that gave Eagle Football the lead for good was ignited by completions to Price for 16 yards and Bonner for 24.

5. After surrendering points on the first SPX series, the Eagles’ defense was as steady as a stone pier in a light breeze. When the game was being decided, the Panthers were scattered, smothered, and covered like a 4:00 a.m. triple order of Waffle House hashbrowns. St. Thomas forced four punts in five possessions before Corbett’s pivotal takeaway. Corbett (7 tackles) and linebacker Kevin Silva ‘21 (8 tackles) then crashed and buried a failed SPX fourth-down attempt to open the second half.

The Eagles’ 14th straight regular-season TAPPS victory continues a resounding bounce back after consecutive defeats to open the season against stout UIL competition in 4A El Campo and 6A Pasadena Dobie.

The Eagles hosted their fourth socially distanced event in five weeks with attendance increasing to 50% of Granger Stadium for the second straight game.

Eagle Football began the night ranked the No. 2 private for the third straight week in the Houston Chronicle media poll.

Kopp orchestrated 541 yards of Eagle offense.  He now owns 2,306 passing yards for 3020 with 24 scoring passes in his second season as the mighty maestro against only 4 interceptions.

For a majority of the past seven years, the DNA of Eagle Football has taken on a predictable rhythm.

St. Thomas has rolled out a series of record-smashing quarterbacks who aggressively push the ball down field, a conga line of game-busting receivers, versatile running backs who serve equal doses in the pass game, and just enough defensive resistance to offer complimentary football.

Rarely do they resort to the adage that the more a team can run, the more physical they are, the less pressure there is on the passing game, the more time they take off the clock for the defense to rest, and the better it is for the entire team. That total picture was framed in vivid detail against St. Pius X.

But by any measure or modus operandi, once the Eagles began piling up points and pulling ahead before halftime, the visitors had to start throwing and pressing and playing the way that wasn’t suited for their survival.

If the Eagles’ offensive performance again had moments of revelation, what the defense accomplished was more of a confirmation. With that unit overwhelming at times, SPX had no chance against a prime TAPPS championship contender perhaps playing like one for the first time this season.

For the Eagles to have genuine designs for deep playoff contention (read: minimum state semifinals), the defense must consistently exhibit a mamba mentality, the constant no matter how well Kopp and Crew produce. That must continue to be the case.

Now 5-2 and 5-0, St. Thomas can aspire to meeting its full potential from here, a goal that once seemed to remain an idle hypothetical. With only two games remaining in the truncated regular season, McGuire knew there was no time to waste flipping that narrative. The Eagles will arrive at Beaumont Kelly and Tomball Concordia Lutheran as blood bank guarantees to extend their on the field winning streak to six knocks in a row. 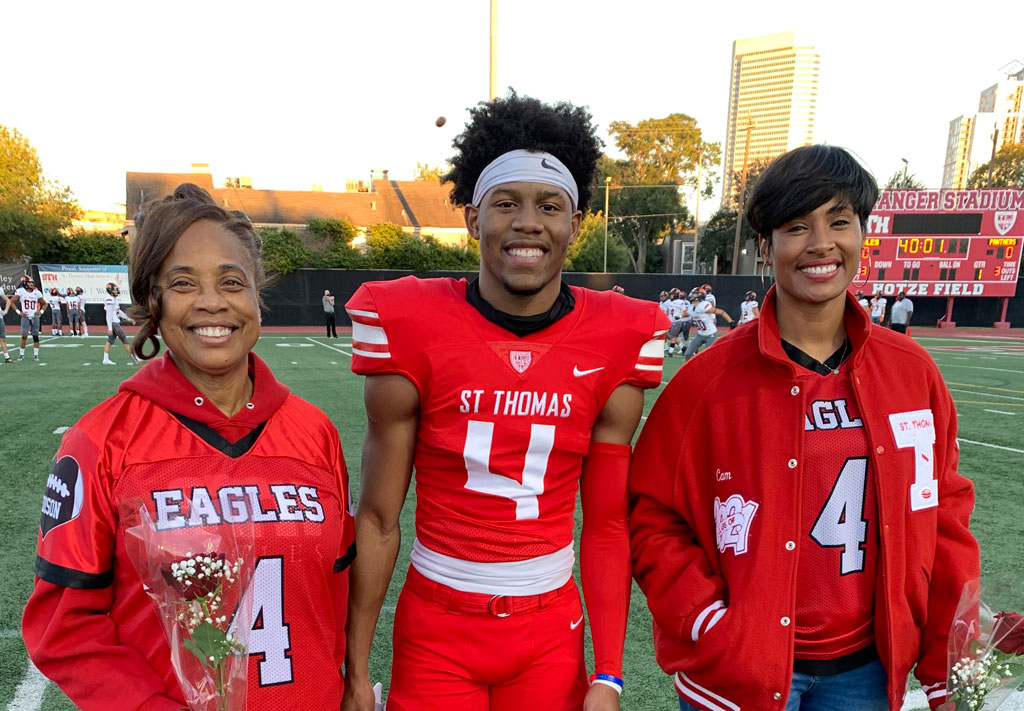 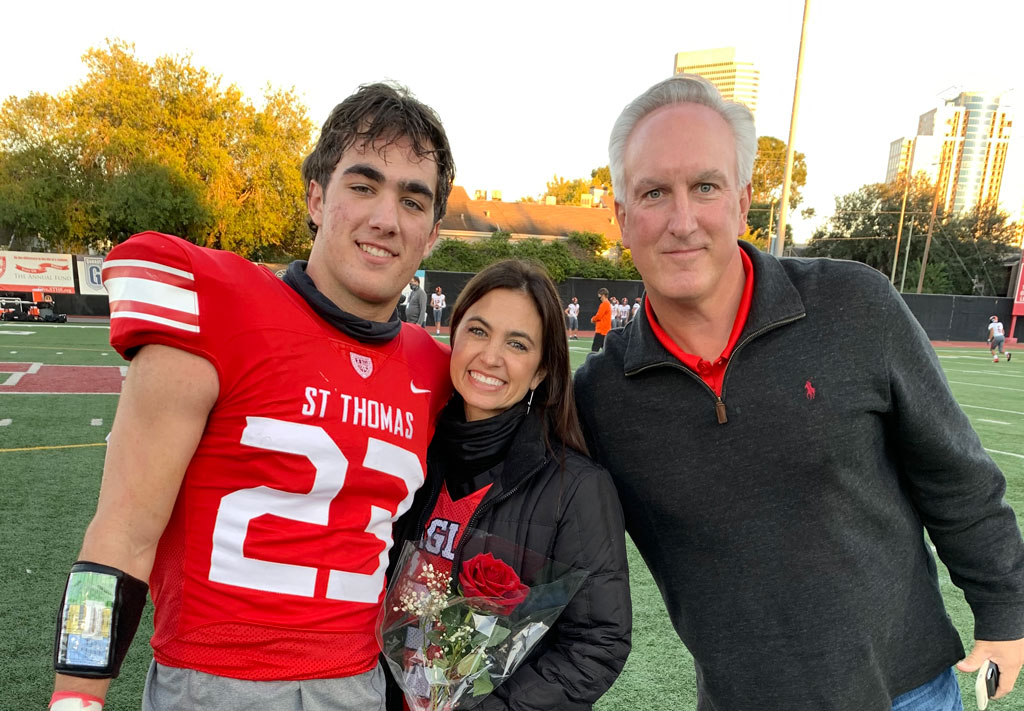 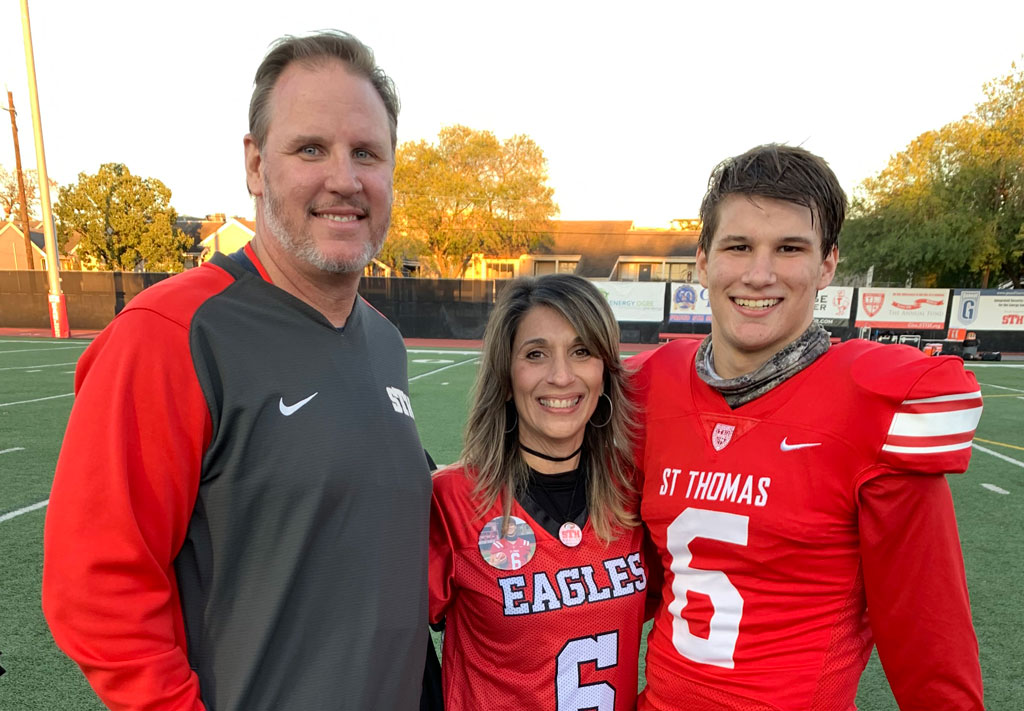 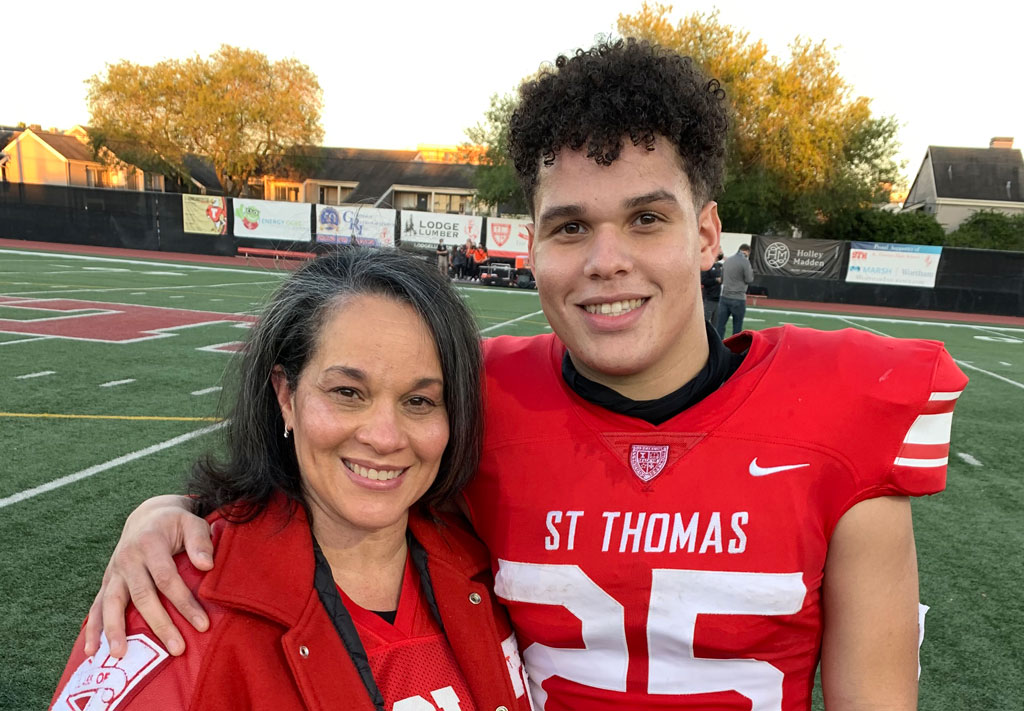 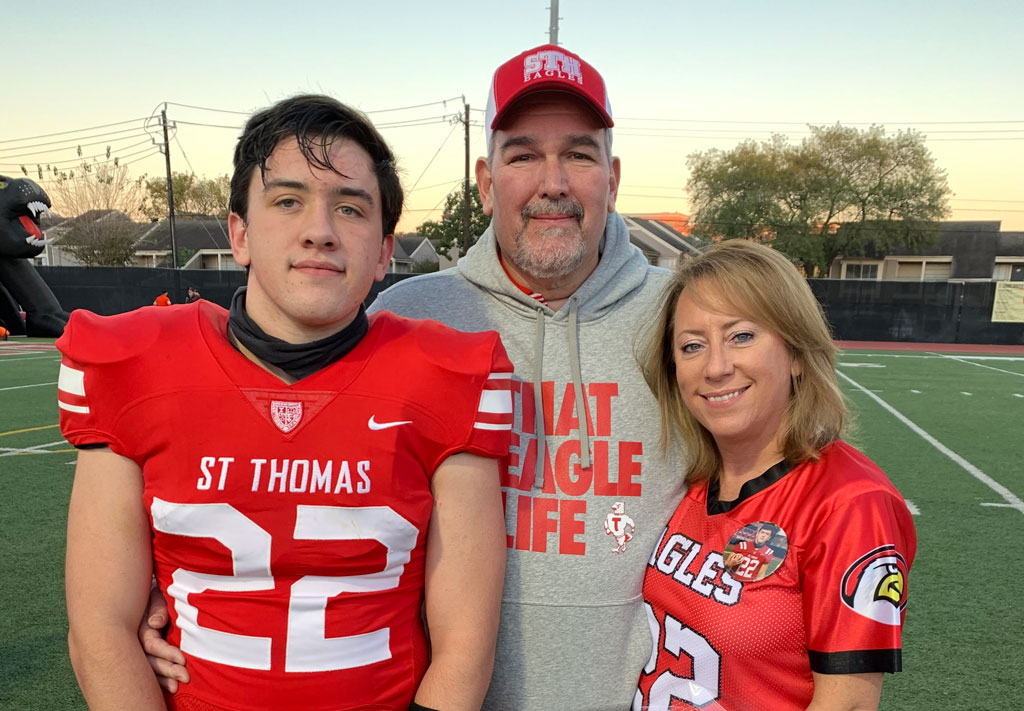 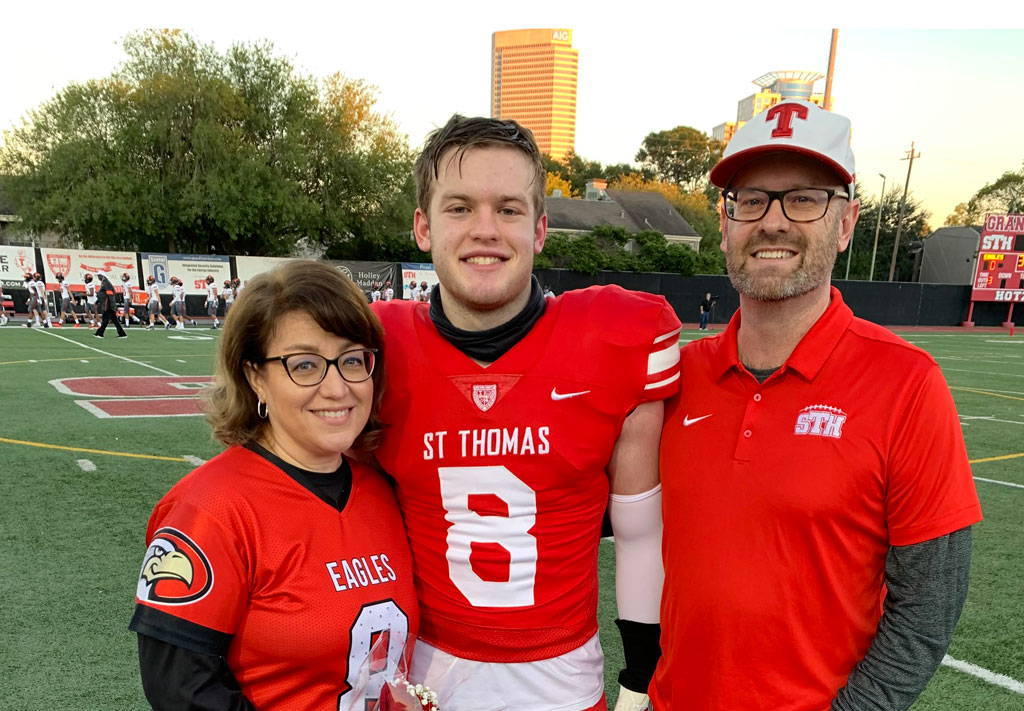 Eagle Football revisits the one-time district set with Beaumont Kelly, last staged in 2017 when quarterback Peyton Matocha ‘19 (University of Miami) threw for three touchdowns and ran for two others in a first-half blitzkrieg. The emphatic 41-22 rout wasn’t nearly as close as the final score indicated. St. Thomas owns nine straight victories in a mismatch matchup by a combined score of 456-77.