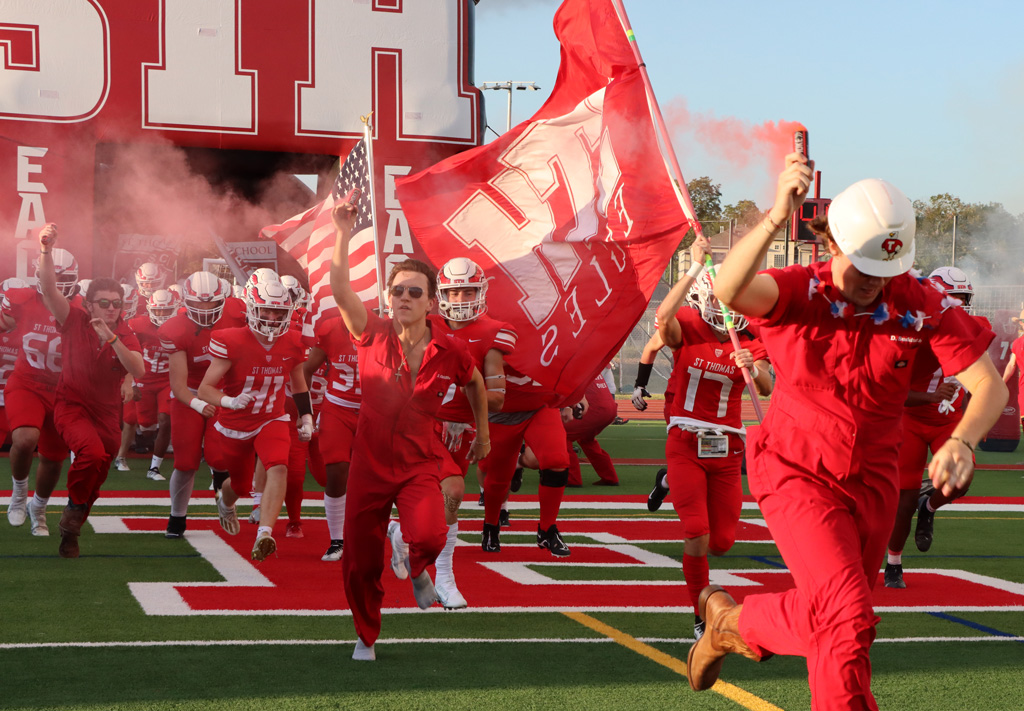 SETTING THE SCENE
Eagle Football launches the postseason ranked no. 2 in the Houston Chronicle private school rankings after seven consecutive weeks as the unanimous no. 1. St. Thomas closes no. 5 in the final Dave Campbell’s Texas Football state poll.

Mad-scramble magician Donte Lewis ‘24 threw for three touchdowns and added a miraculous see-still-not-believe 15-yard escape for a fourth score but the escapades weren’t enough to rescue the win. The Eagles rallied to tie the game five times when trailing by seven points but couldn’t survive their Thursday evening of living dangerously. 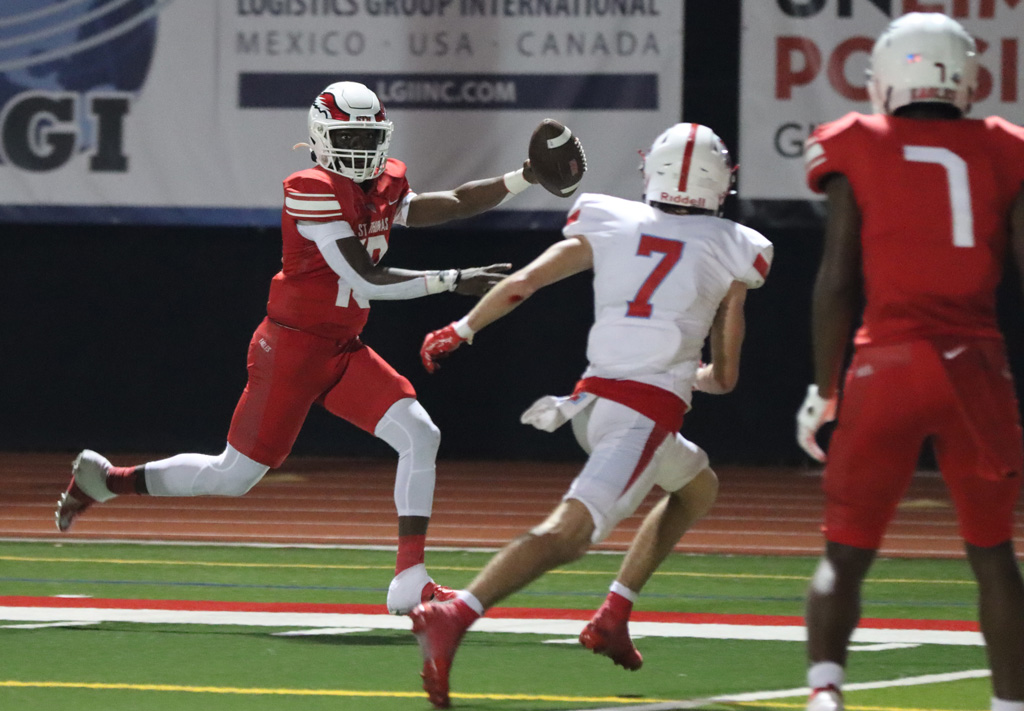 ROCKIN’ THE FILLMORE
Lewis was named the Built Ford Tough Player of the Week presented by Bally Sports Southwest following his scintillating performance in the 49-24 floor wipe of St. Pius X.

The dazzling dual-threat dynamo ran for 163 yards with three touchdowns, threw for 218 yards and a fourth TD, connecting with Shaffer Henderson ‘23 on a dazzling completion to set up a score as Eagle Football romped and stomped to its ninth straight win without a loss.

Donte Lewis DOMINATED in the air and on the ground in Houston St. Thomas' win over St. Pius X

Lewis matched his predecessors Maddox Kopp ‘21 (Colorado) and Jake Wright ‘22 (Pittsburg State) in receiving the prestigious POW award. And, yes, all no. 18 in your program. 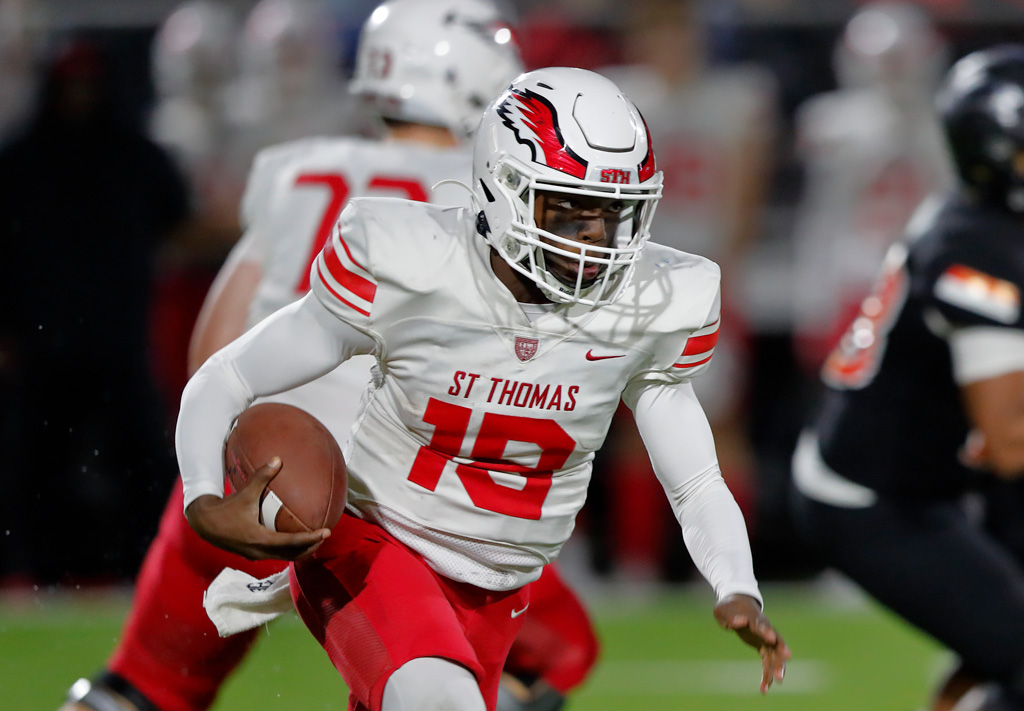 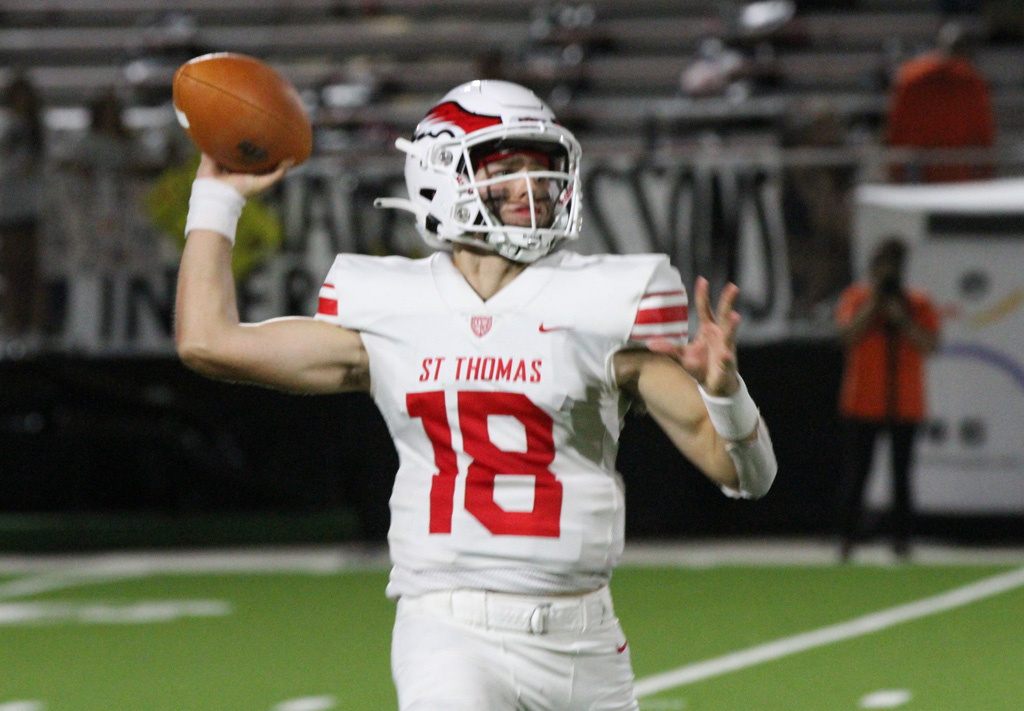 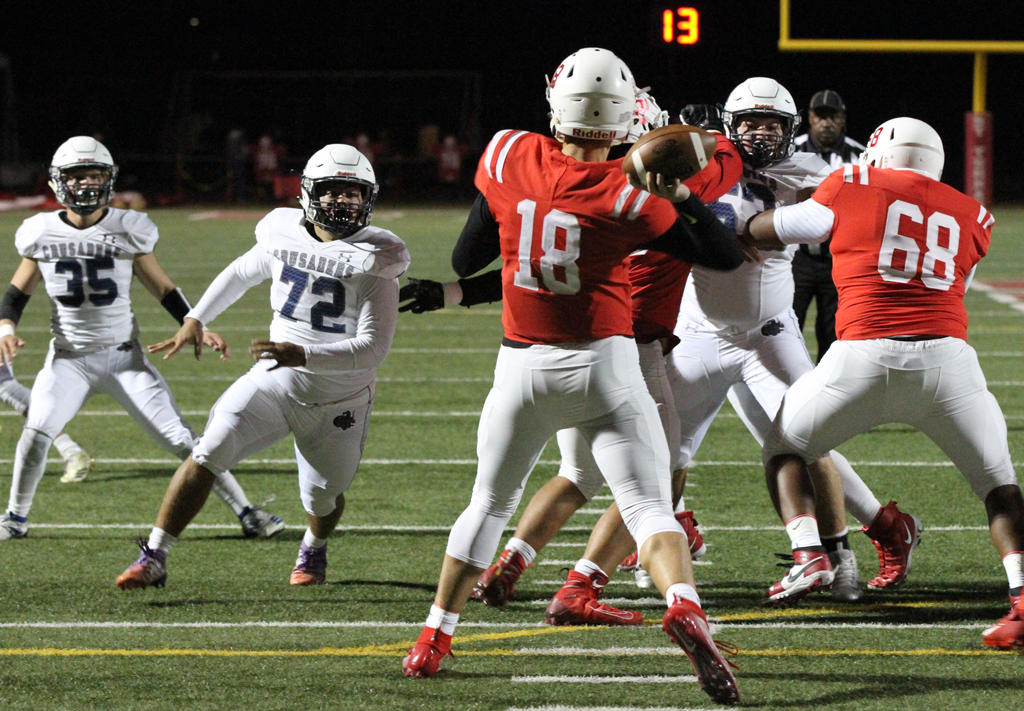 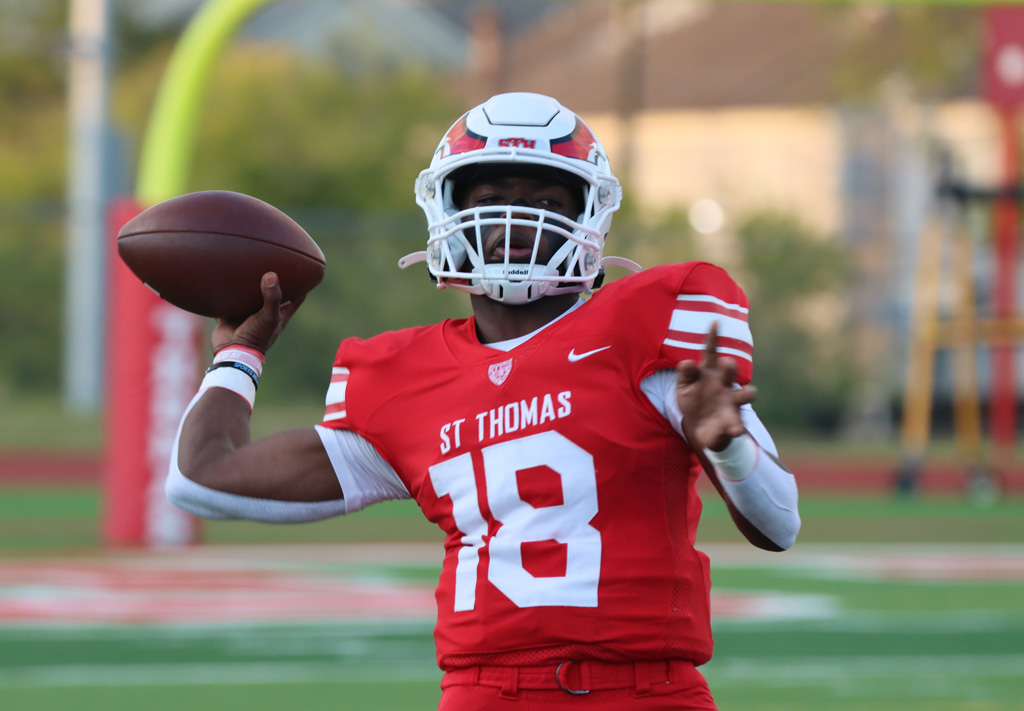 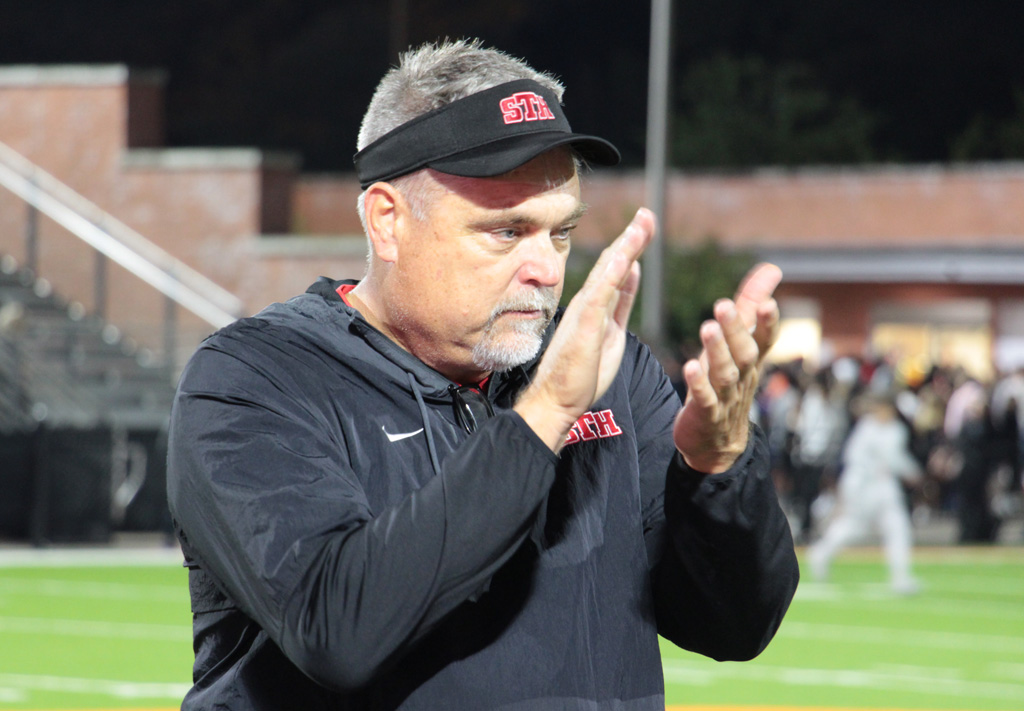 In his first season as a varsity starter, Lewis racked 2,704 total yards and was part of 32 scores (24 passing and eight rushing) in nine games while seemingly unleashing a couple of throws every week that dilated your pupils. His was an improvisation that was remarkably engaging and intelligent, but never gratuitously complex or unusual. Think Dexter Gordon on the tenor sax.

Wrecking ball running back Johann Cardenas ‘24 concluded 2022 bruising, bashing, and bolting for 1,041 rushing yards (9.6 per carry) and 1,371 yards from scrimmage with 18 end zone trips in only seven games.

Henderson and Luke Edgecombe ‘24 evenly split more than a 1,000 receiving yards with 11 touchdowns while both averaging more than 20 yards a reception. 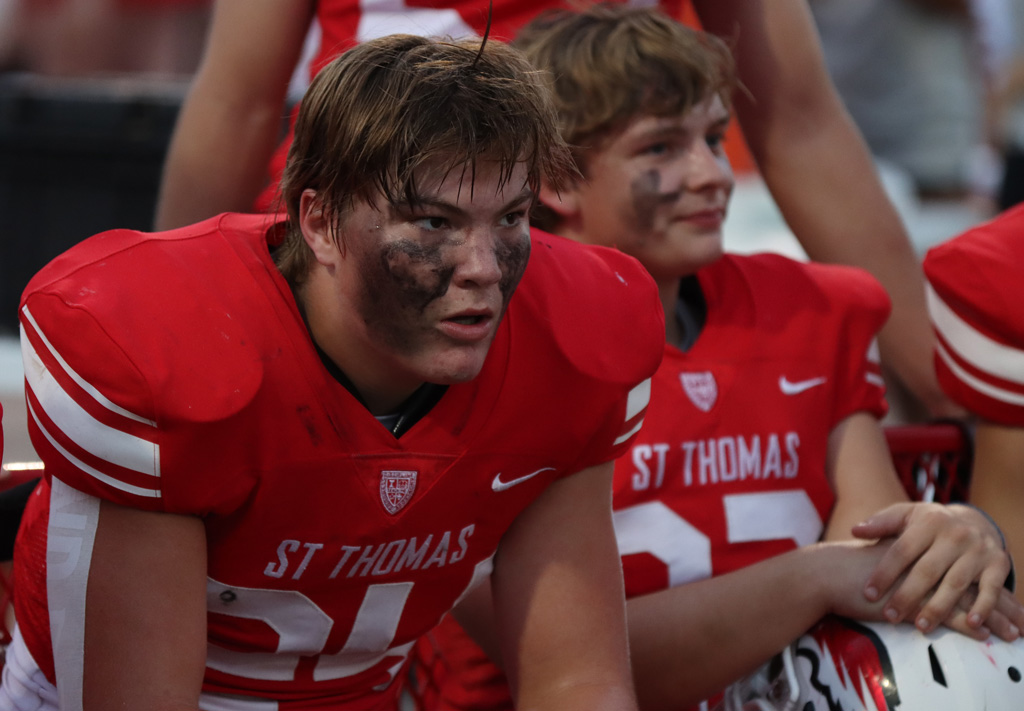 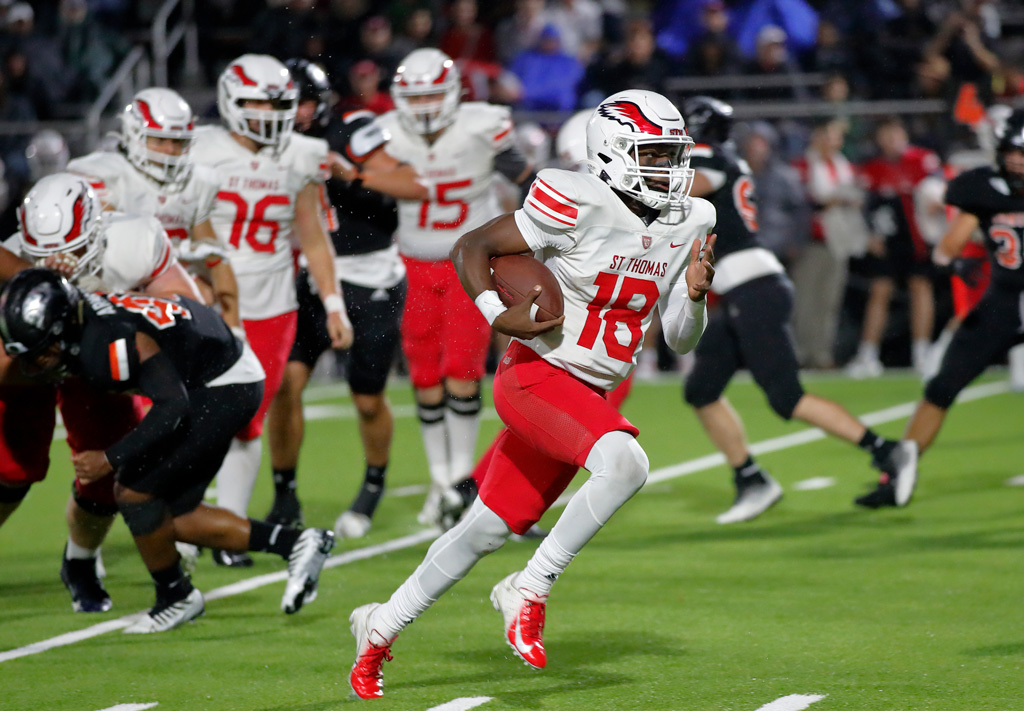 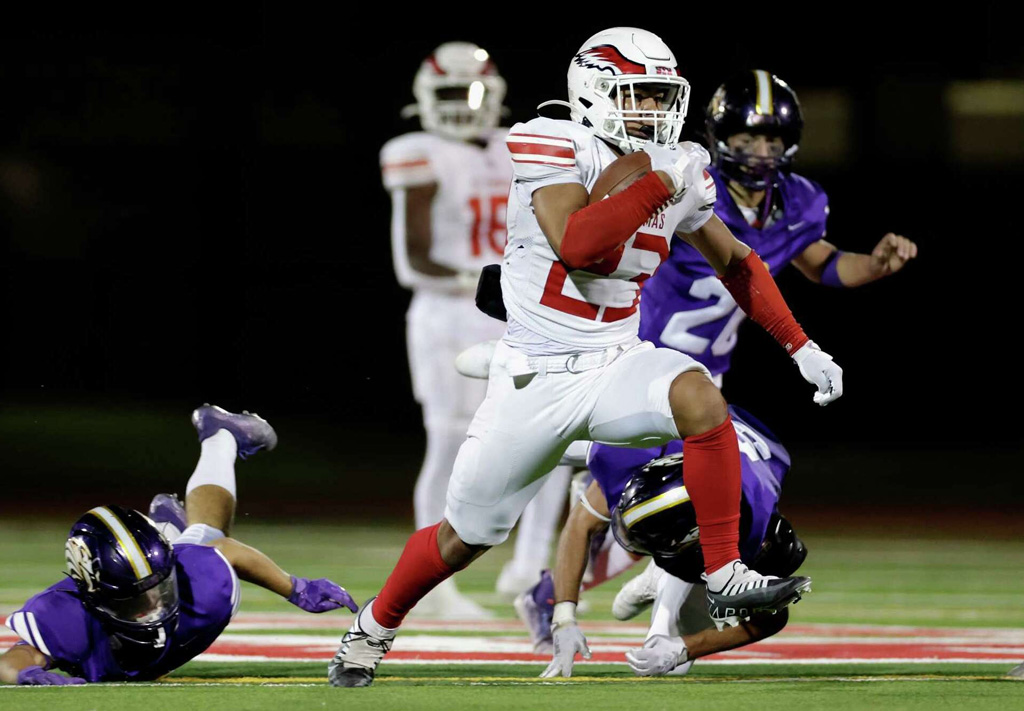 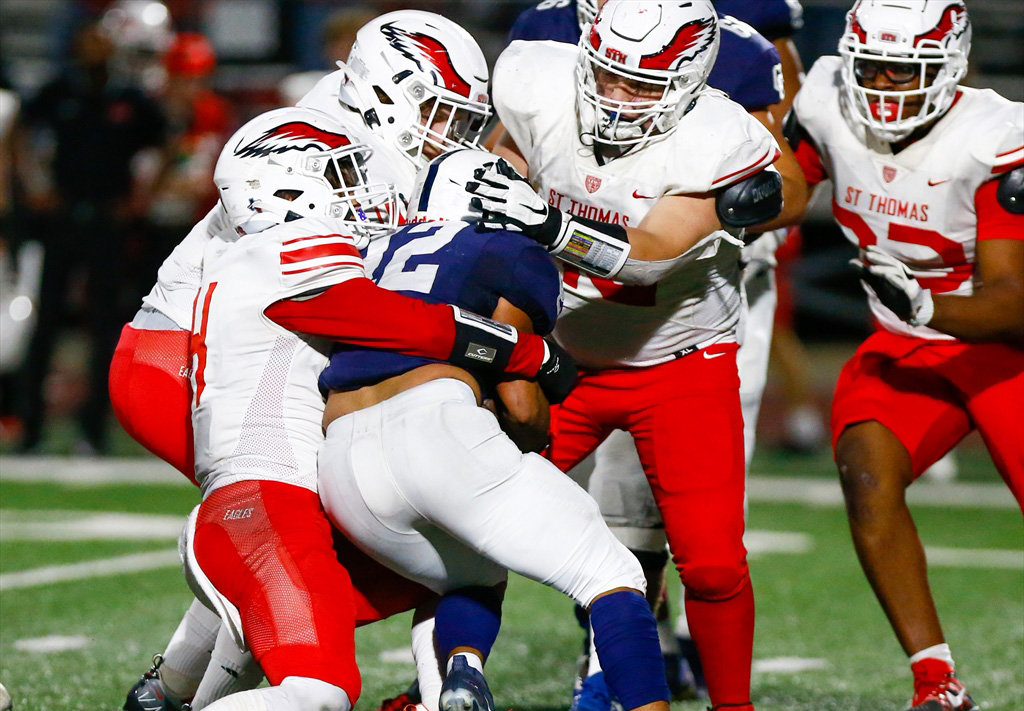 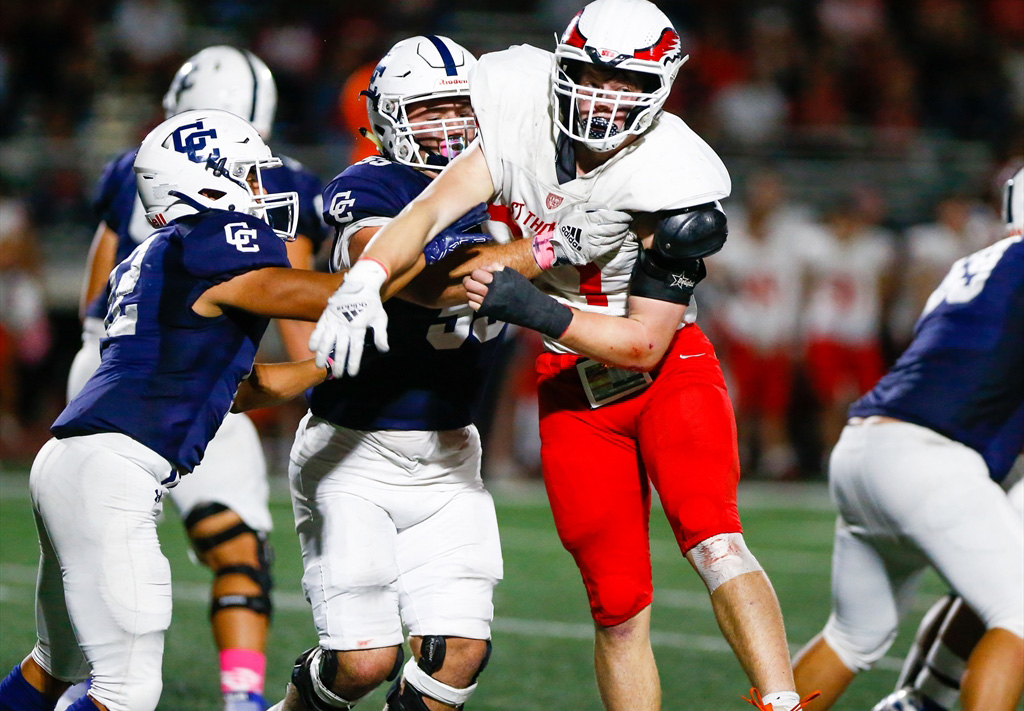 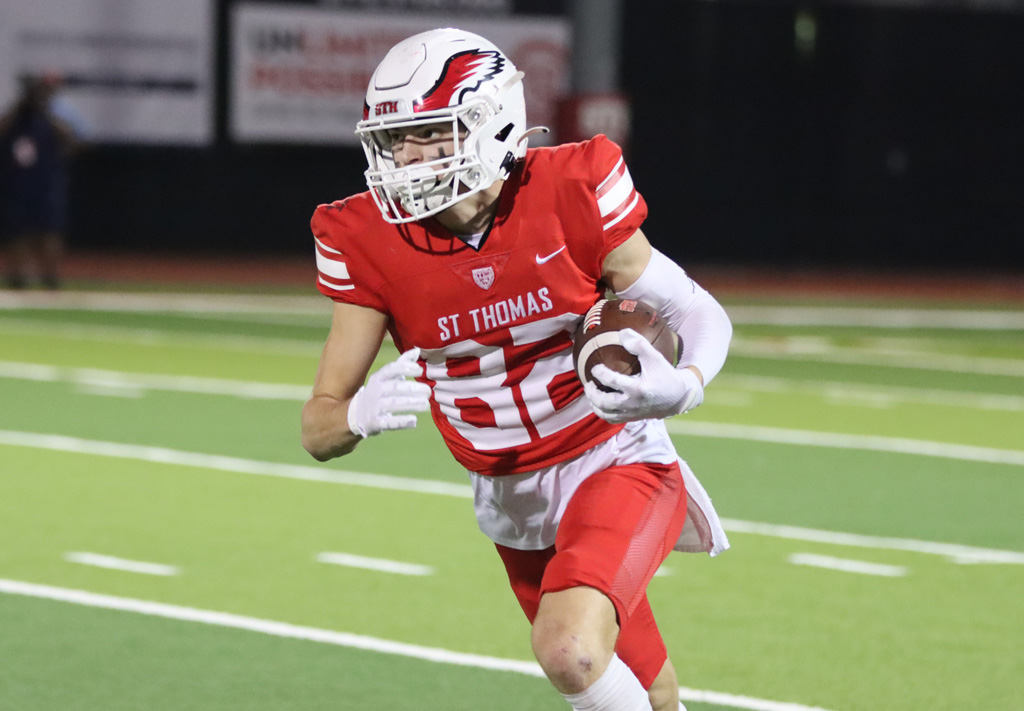 DEJA VU ALL OVER AGAIN
Eagle Football cruised to a runaway 51-35 win over TCA to open the 2019 postseason. Kopp feasted on a scoring buffet of seven touchdowns in his varsity playoff debut – throwing, running, and a Super Bowl-like “Philly Special” reception in the pivotal first half at Hotze Field inside Granger Stadium.

The Eagles led 14-0 after the first period, 28-10 at halftime, and were never really threatened as they raced to their sixth straight victory and seventh in eight games.

St. Thomas answered TCA’s first points of the game midway second period when Kopp then took a direct shotgun snap inside the Trojans 10-yard line. He handed off to running back John Fontenot ‘21 moving left, who then flipped the ball to reversing receiver Spencer Kryger ‘20.

Kryger didn’t try to run the ball. He didn’t even pause. He simply rolled right and lofted a short pass to the front right corner of the end zone, where Kopp cradled the first touchdown reception of his varsity career. The trickeration was reminiscent of the antics featuring Philadelphia Eagles quarterback Nick Foles in their pasting of the New England Patriots in Super Bowl LII. 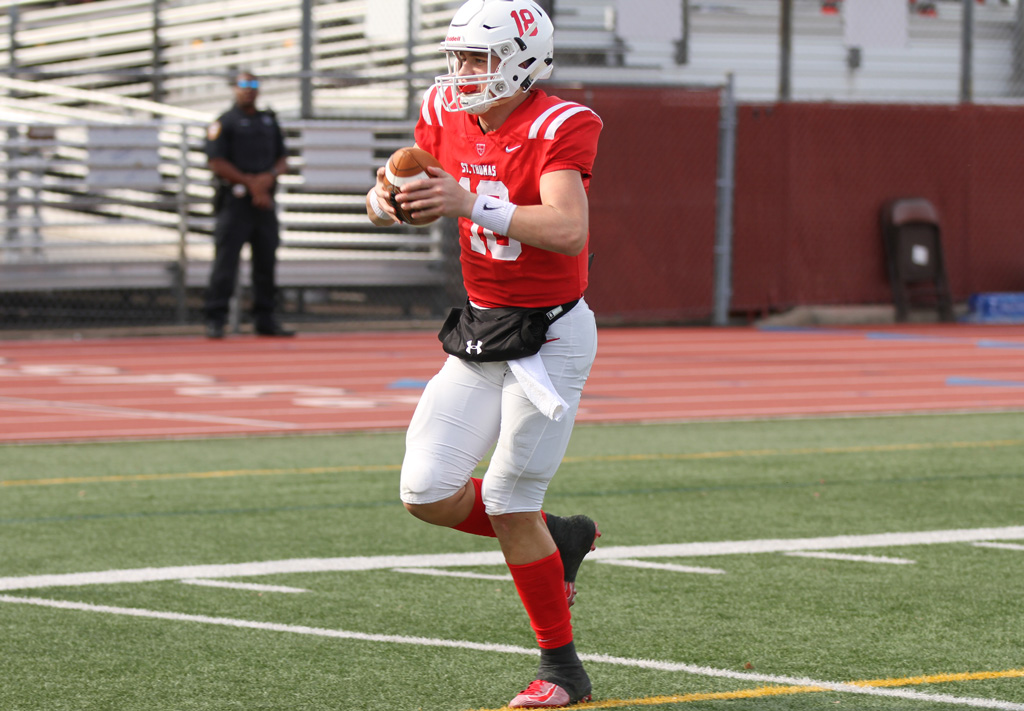 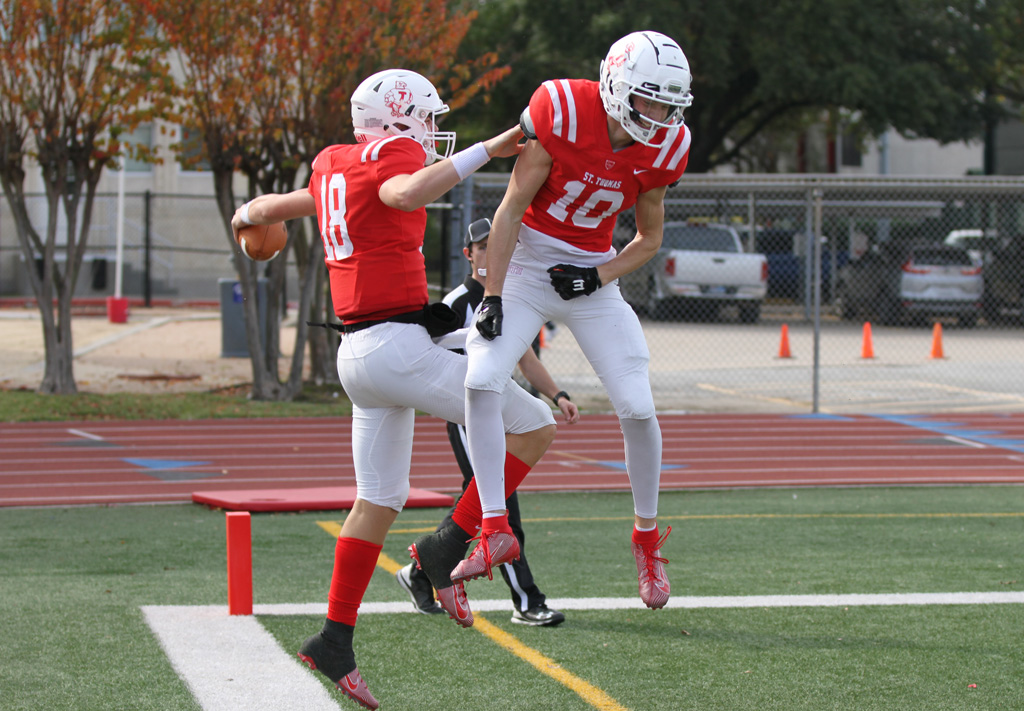 MILES AND MILES OF TEXAS (sponsored by Asleep at the Wheel)
The upcoming visit to Belton means the TAPPS state football playoffs add yet another destination on the postseason odyssey for Eagle Football. The joyride travelogue since 2011 includes at least one stop in Austin, Temple, Teague, Groesbeck, Palestine, Plano, Fairfield, Rusk, the Ford Center at The Star in Frisco, Fredericksburg, and Buffalo. 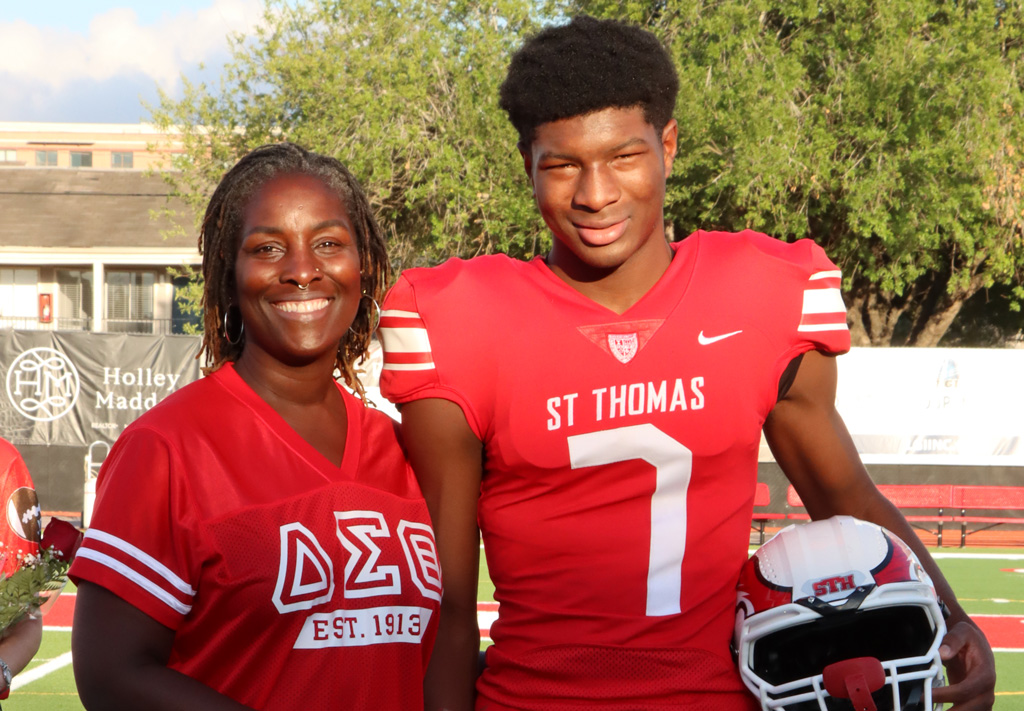 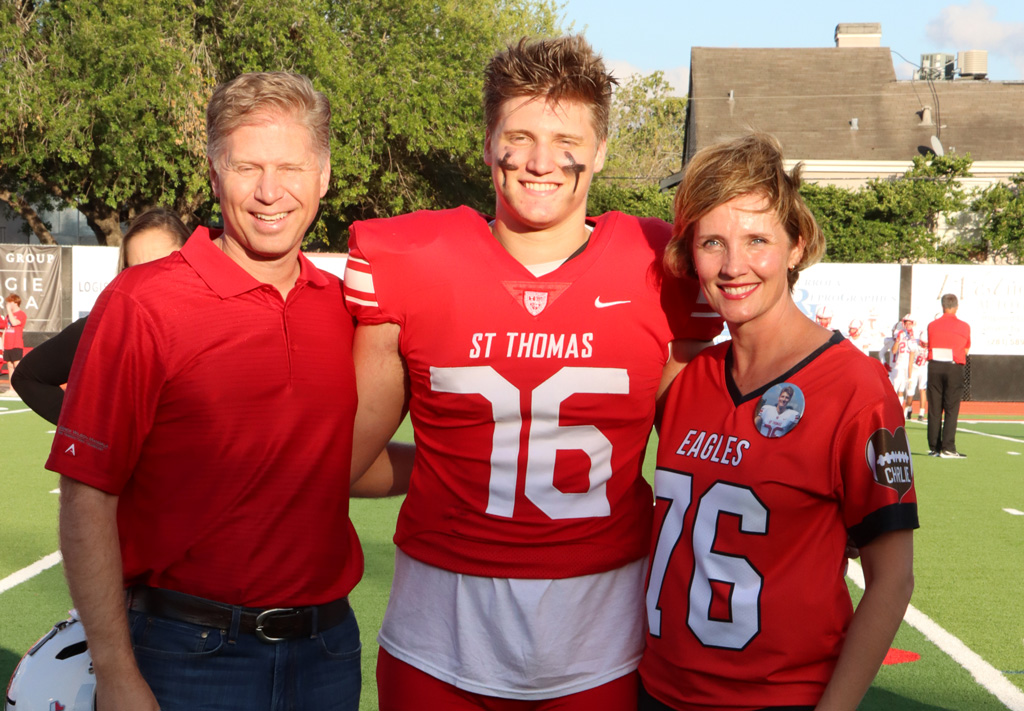 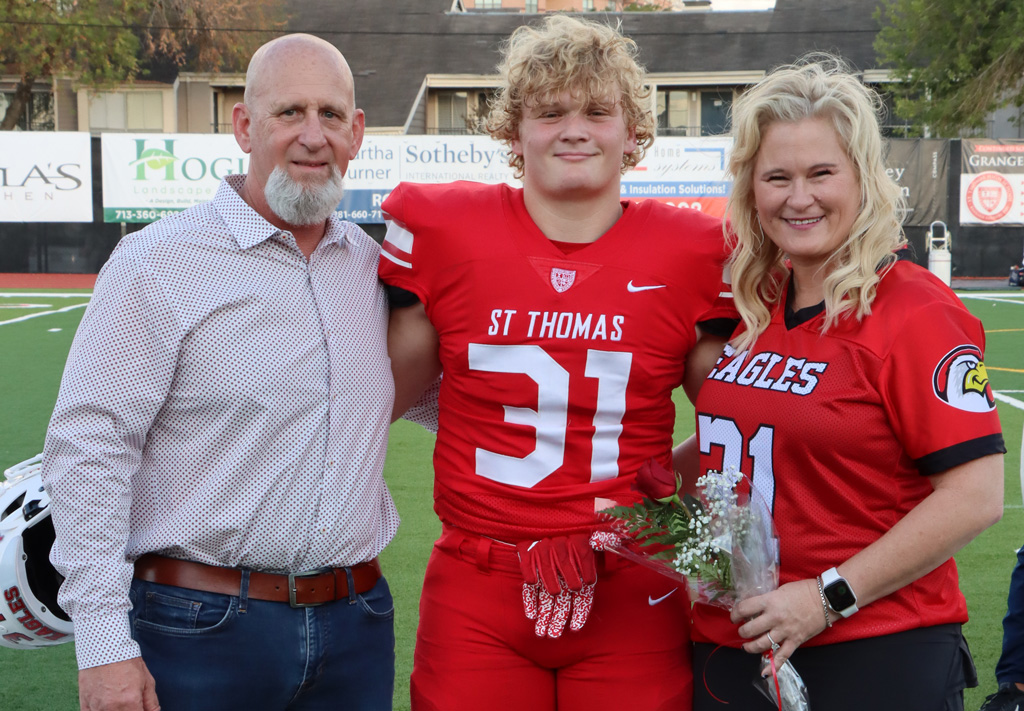 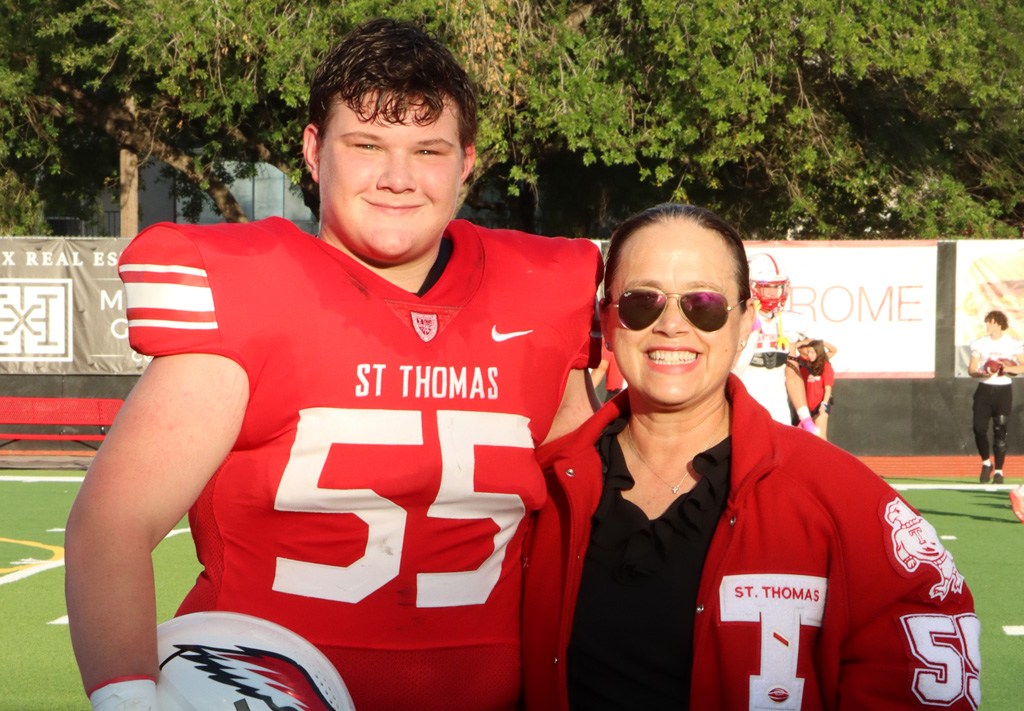 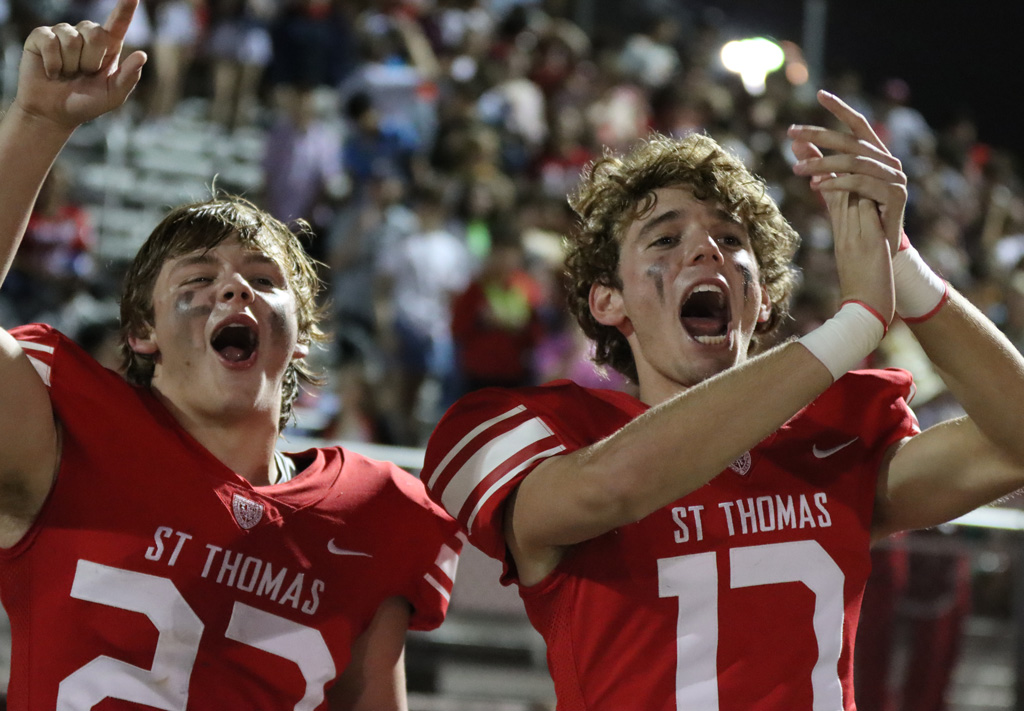